Gottlieb Daimler built the world’s first truck in 1896. How did it look?

Gottlieb Daimler was the one to build the world’s first truck. It was based on a converted horse-drawn goods wagon.

The motorcycle. The motorized trolley car. The motorized firefighting hose. And eventually the truck in 1896. The world’s first looked like a cart with an engine and without a drawbar. What set it in motion was a “Phoenix” engine with a displacement of 1.06 liters. Daimler linked it to the rear axle with a belt. The fuel consumption was of approximately 6 l/100 km. Two helical springs protected the sensitive power unit. A chain managed to seer the leaf-sprung front axle. 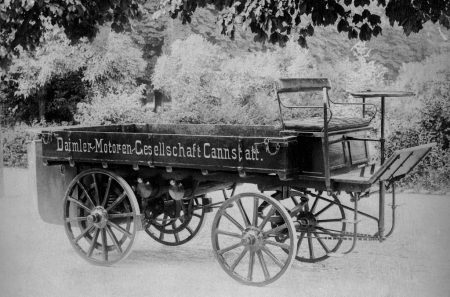 The seat for the driver was similar to that in a carriage. The technology back then previewed that of today. Therefore belt drive sent the power from the engine to a shaft fitted transversely to the longitudinal axis of the vehicle. There was a pinion at both ends. Each tooth of this pinion meshed with the internal teeth of a ring gear, firmly connected with the wheel to be driven. This is how the planetary axles of the Mercedes-Benz trucks, the current Arocs range included, have worked in principle.

Gottlieb Daimler decided to move the engine of the truck

In 1898, Gottlieb Daimler and Wilhelm Maybach found a better solution. They decided to shift the two-cylinder engine from the rear under the driver’s seat. Later on, it was relocated in the front of the front axle. It now developed 10 horsepower via a four-speed belt drive.

Gottlieb Daimler was extremely cautious prior to presenting the new truck to the public. The model therefore underwent a wide array of tests at a brick factory in Heidenheim. Daimler eliminated its shortcomings one by one. 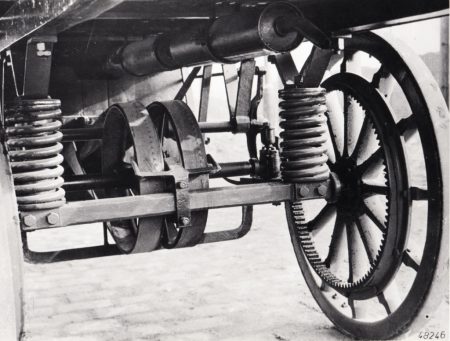 The first order came from England, the home of industrialization back then. It reached Paris as well, later on, when Daimler presented his creation at the world exhibition in the Tuileries park. The Automobile Association of France’s event followed.  “Huge crowds of people, many vehicles of all kinds and our truck are very popular,” noted Lina, Daimler’s wife, in June 1898.

Karl Benz, in Gottlieb Daimler’s footsteps with his own truck

In 1900, Karl Benz, the inventor of the Benz Patent Motorwagen, also built a truck. The lightest version, with a 1250 kilograms payload, came with a five to seven horsepower-strong one-cylinder engine. The medium-duty version with a 2.50 tonnes payload featured a ten-horsepower one-cylinder engine. The top variant, the heavy-duty model, with a 5.0-tonnepayload, was powered by a two-cylinder Contra engine that developed 14 horsepower.

The engine sat at the front, horizontally, driving the rear axle via a four-speed transmission and chain.