by The Editor
in Blog
0 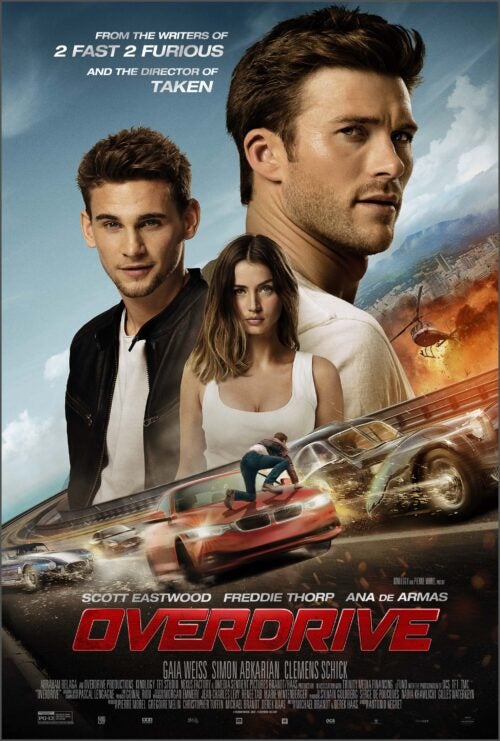 Affiliate Disclosure: As an Amazon Associate, Automoblog earns from qualifying purchases, including the movies featured here. These commissions come to us at no additional cost to you.

Here is the synopsis for Overdrive. Tell me if you’ve heard this one before:

Despite their sibling issues, half-brothers Andrew (Scott Eastwood) and Garret Foster (Freddie Thorp) run a crew of high-end car thieves working in Europe. After stealing a rare Bugatti, they discover it is owned by noted Marseille crime boss and exotic car collector Jacomo Morier (Simon Abkarian). They are caught and tortured but convince Morier to let them make amends by stealing a 1962 Ferrari 250 GTO owned by merciless mogul and arch-rival to Morier, Max Klemp (Clemens Schick). Morier agrees on the condition that the GTO be delivered within one week!

So far, it feels like a Xerox of a dollar-store copy of Gone in 60 Seconds and Fast & Furious. And believe it or not, Overdrive gets less original from here.

As the brothers Foster rebuild their crew, now including Andrew’s girlfriend Stephanie (de Armas) and her pickpocket friend Devin (Gaia Weiss), Andrew tells Garret this will be his last job. Morier’s cousin Laurent (Abraham Belaga) keeps tabs on the crew. Garret falls for Devin. Morier’s stooges kidnap Stephanie while photogenically shopping at the marketplace in Marseille. Andrew and Garret pinky swear to Morier to finish the job to save Stephanie.

No. Just, no. Okay. First off, they brag about Overdrive being written by Michael Brandt and Derek Haas. Brandt and Haas are best known for writing the remake of 3:10 To Yuma, Wanted, and 2 Fast 2 Furious. Someone put their names on the poster for Overdrive: “From the writers of 2 Fast 2 Furious,” like it’s something to be proud of, the only movie in the F&F franchise worse than Tokyo Drift.

And with a Rotten Tomatoes approval rating of a shatteringly low 29 percent, there is very little that works in this movie starring Clint Eastwood’s kid and Ben Affleck’s old girlfriend.

But The Cars Ain’t Bad

Overdrive offers an excellent cast of cars, even if the filmmakers don’t fully understand them. When a low-speed chase along the French Mediterranean ensues, Morier and his thugs (who display that overtly generic constipation face while driving) can barely keep up with a (checks notes) 1938 Bugatti Atlantic. The bad guys have a Maserati Quattroporte V and Porsche 911 Carrera 997. While the Type 57 SC Atlantic is probably the most legendary Bugatti and was very fast for its time, the Maserati and Porsche have the benefit of being 21st-century sports and performance cars.

But what do you expect from a movie The Hollywood Reporter said was a “formulaic adolescent-male button-pusher, which is witless and brainless but not entirely joyless.”

Should You Watch Overdrive?

Maybe. I mean, there are worse ways to blow an hour and a half. Overdrive is a straight-up, by-the-book action film circa 2017. The CGI is minimal for the flames and smoke, and the driving is real, although not very impressive (there is one part where the speedometer is at zero inside Garret’s BMW). You probably don’t want to look at Overdrive if you’re hoping to find your next favorite car movie. Sure, there are lots of flashy cars, pretty scenery, and all the obligatory oligarchical trappings you would expect from this kind of movie, but it ultimately gets stuck in park.

If you still want to give it a go, Overdrive is available for rent or purchase on Amazon Prime.

Longtime Automoblog writer Tony Borroz has worked on popular driving games as a content expert, in addition to working for aerospace companies, software giants, and as a movie stuntman. He lives in the northeast corner of the northwestern-most part of the Pacific Northwest.

There is little doubt that making the transition from internal combustion engine (ICE) vehicles to electric vehicles (EVs) is...

‘Flying blind’ in an era of unpredictability: how data holds the key to the chip shortage

Automakers need a concrete data strategy to find their way out of the current chip shortage, writes Andrew ShafferThe...

We like to consider ourselves competent drivers, but that’s rarely the case. A study conducted by the National Highway...

Will Girling examines the use of simulators to help autonomous trucks gain the thousands of miles’ worth of experience...

Affiliate disclosure: Automoblog and its partners may be compensated when you purchase the products below. You have many levels...