Safety Third: This Video Showing The Starting Process of A Rumley Oil Pull Tractor Is Insane 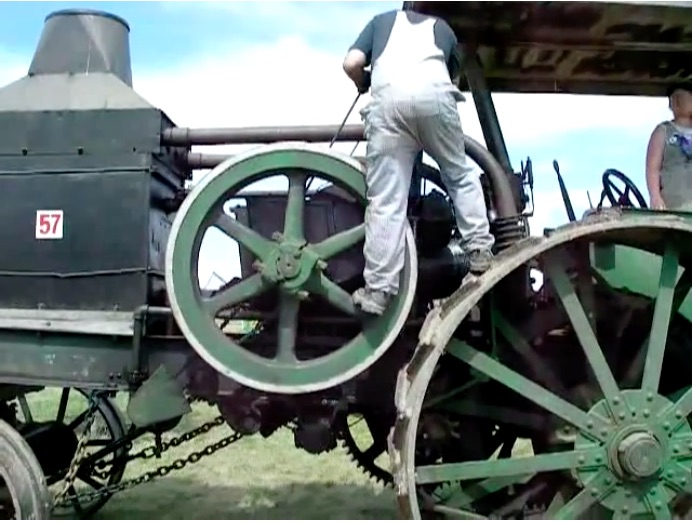 The Rumley Oil Pull tractors were a bit of a shock to the market when they came out because they used kerosene for fuel in a world populated by steam powered tractors. These things has engines with 10″ bores and 12″ strokes. You can watch videos on YouTube where you can actually count the revs as the cylinder fires and the piston returns to the top of the bore. In this case we are going to watch how a farmer of the era would have started one of these things. There was not electric starters at that point, there was no pneumatic assistance for turing the engine over. The guy had to do it himself.

The tractor operator had to first stop repeatedly on a pedal that shot a huge amount of fuel into the massive cylinder of the engine and after he as satisfied that he did that properly the true madness began.

Stepping out on to the huge steel wheel with steel tines, the guy then had to stand ON THE FLYWHEEL to get the engine turning and ignite the fuel. The move that kept him alive was stepping off the second that the engine fired so that he was not caught and flung into Kingdom Come be the wheel that weighed twice of three times his body weight.

This guy makes it look easy. Imagine doing this on a frigid fall morning, trying to get the thing to start, making sure it was out of gear (No neutral safety switch here, fool!), and then going out to work for as many hours as mother nature would allow.

Press play below to see this video of a farmer starting a Rumley Oil Pull – Crazy!