It seems like only yesterday that the Honda Civic Type R arrived with great fanfare to U.S. shores in 2017. That’s probably because we had waited so long – 20 years since the original Civic Type R’s introduction in 1997 – for the hi-po Honda to come stateside. But the current Type R is based on the 10th-generation Civic, and with the 11th generation already previewed, its days are numbered. So, Honda’s sending it off with a bang in the form of the 2021 Civic Type R Limited Edition.

One thing’s for certain, there’ll be no mistaking this special edition for anything else. It’s yellow, you may have noticed. The exact hue is Phoenix Yellow, one of the hero colors of the 1997 Civic Type R and one with great nostalgic value to hard-core Honda fans. It’s also got a blacked-out roof and hood scoop, but this limited edition is more than just an appearance package.

Somehow, Honda has managed to squeeze even more heat out of an already spicy ghost pepper. The standard-issue Type R is a joy to drive – if you can call a front-drive, Nürburgring-record-breaker “standard.” With 306 horsepower and instantaneous direction-changing ability, it zips through pods of rambling SUVs like they’re standing still.

Its 295 pound-feet of peak torque kicks in at a mere 2,500 rpm, so you never have to hunt for the right gear. Of course, you may want to change gears anyway just to revel in the shifter’s bolt-action precision and the weight of its aluminum shift knob. The clutch isn’t too soft, like many modern third pedals dumbed-down for the stall-prone, providing just enough pedal travel and resistance to modulate well. 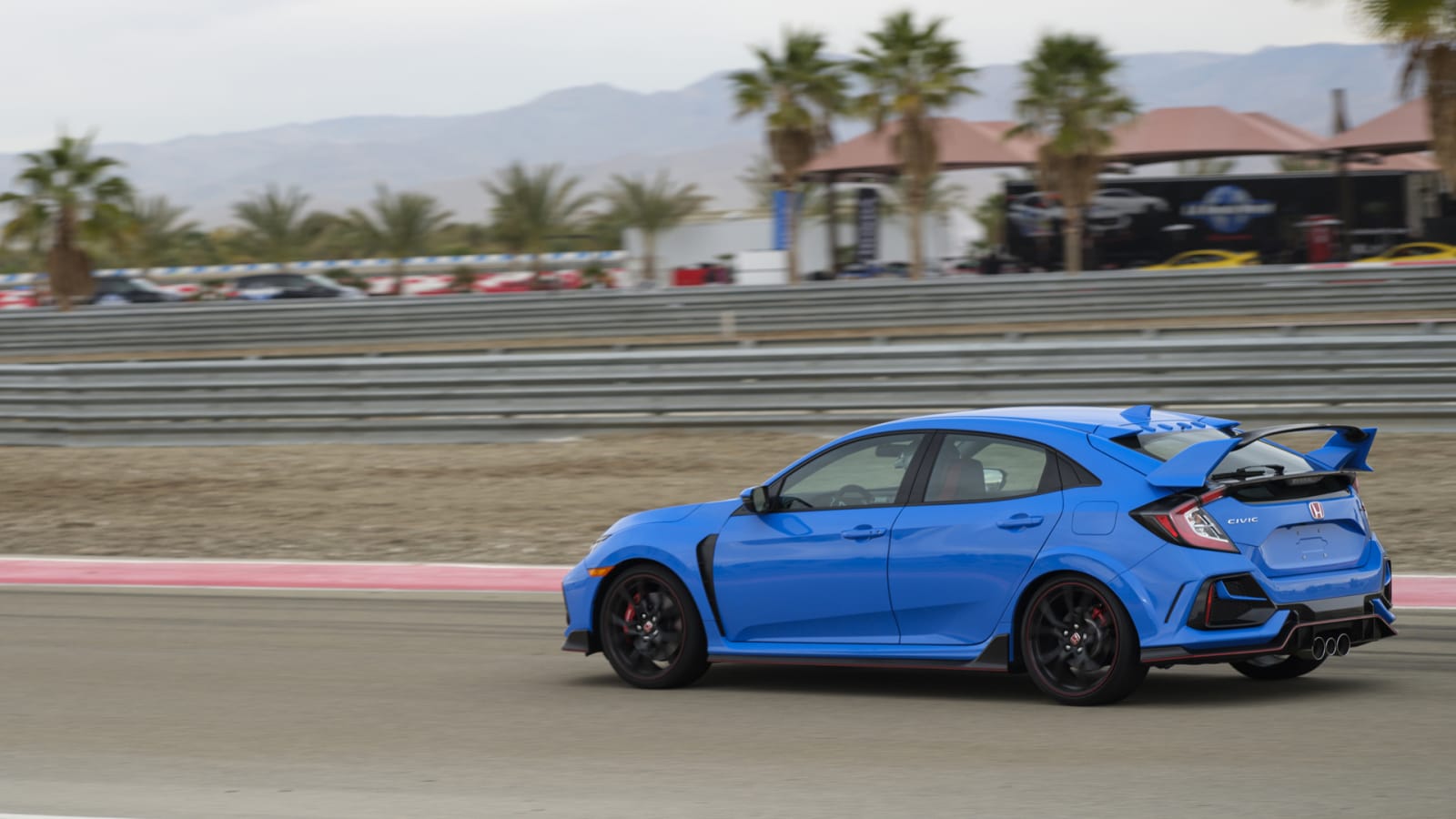 The Civic Type R’s true calling, however, is the track. And remember, we’re still talking about the regular, unlimited version here. Dial up the +R drive mode to put the adaptive suspension in its firmest setting and it’ll corner flatter than a week-old soda. Even after repeated stomping on the brake pedal, the four-pot Brembos consistently yank the car to a halt like the Millennium Falcon coming out of hyperspace. Throttle response evinces no turbo lag, just accelerative force that churns all the way to redline.

Wheelspin is banished by a helical limited-slip differential. There’s no torque steer either, thanks to dual-axis struts. In fact, the Civic Type R doesn’t behave like a front-wheel-drive car at all. Its most amazing engineering feat is that even when you go into a corner hot, even if you break traction, it doesn’t understeer.

So, we’ve established that the Civic Type R is a downright magical circuit weapon. The Limited Edition takes all that and adds lightness. Honda shaved nearly 50 pounds from the regular Type R’s curb weight by deleting things such as sound deadening, the rear parcel shelf, and the rear wiper. That might not seem like a lot when you’re talking about a 3,121-pound car, but we noticed a marked difference when driving the cars back to back at the Thermal Club track outside Palm Springs, Calif.

That’s because a bunch of the weight savings also comes from 20-inch BBS forged alloy wheels and exclusive Michelin Pilot Sport Cup 2 tires, which discard 22 pounds of unsprung weight while adding grip. Suddenly, acceleration felt as if the torque curve had shifted left by about 800 rpm. The steering got quicker, and turn-in arrived sooner. In fact, steering development lead engineer Norimasa Arai benchmarked another Type R special, the Japan-market NSX-R, for steering feel. As a result, we easily added a couple of mph to each turn, and in racing those incremental gains are everything. 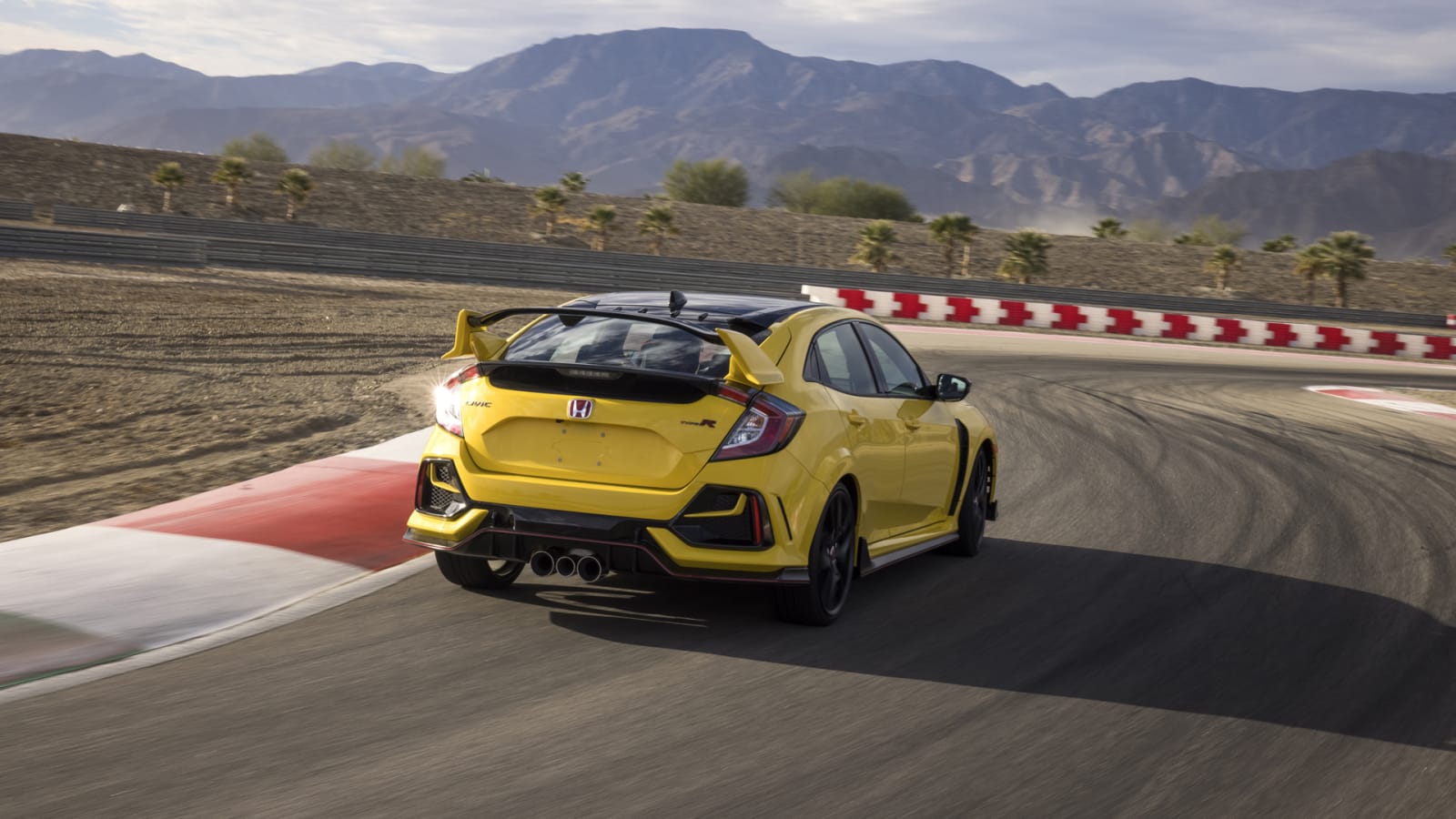 Honda has already confirmed that the 11th-generation Civic will have a Type R variant. Since this Limited Edition is both the pinnacle and swan song of the current-gen Type R, we should take a moment to reflect on what it means to wear the Type R badge.

The original Civic Type R is still a quintessential example of Honda engineering. It generated an astounding 182 hp from a high-revving naturally aspirated 1.6-liter engine. Its peak power and 118 lb-ft of torque arrived near its 8,400-rpm redline, but there was something outrageously satisfying about winding up those old Honda motors to keep the momentum going. The current car charges so angrily that it’s almost too easy to drive fast, and that takes away some of the magic – though it does replace it with a different type of powerful sorcery.

Then there’s the aesthetics. The original Type R was barely distinguishable from a regular Civic, and there was something wonderfully subtle (and tasteful) about that. Now, everyone knows you’re coming. The massive wing, plethora of faux vents and sheetmetal creases are too loud. It’s also literally loud, whether from its weird triple exhaust (well, dual exhaust plus a central resonator) that signals to the whole neighborhood that you’re coming ‘round the corner, or from the fake engine sounds piped into the cabin through the speakers.

There’s a purity, a distillation of the driving experience that has given way to flashiness and fury. We know turbo engines are here to stay, and that the current car will run rings around its great-great-grandfather. The Limited Edition has already set a new front-drive record at Honda’s own Suzuka Circuit. For the successor, we’d like to see a version that continues with the incredible defiance of the laws of physics, but without the visual and auditory brashness of the current model.

There will only be 600 Civic Type R Limited Editions sold in the United States. Each one will be affixed with a plaque denoting its production order. We think that there will be enough buyers who respect the marque to drop $43,995, or $6,500 more on top of the base Type R, on a Phoenix Yellow tribute to one of the all-time greats. Hopefully, the next one will strike a balance between then and now to be even greater.