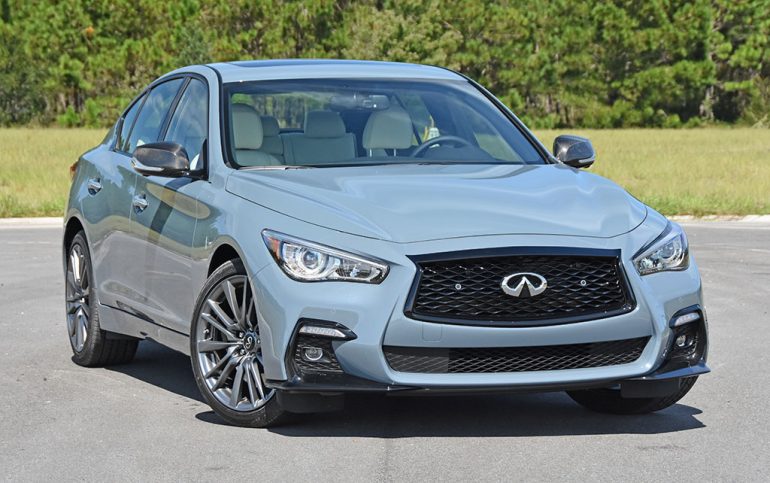 Automotive manufacturers must work overtime to keep their product line fresh and packed with the latest tech to remain relevant. When things start to get a little behind the competition, people start to call out an automaker, as they have with Infiniti. However, Infiniti looks to get themselves back into the game and score some major points with new products on the horizon. Until then, vehicles like the Q50 luxury sports sedan carry the weight. Fortunately, the Q50 remains to be a solid product and inspires with hope in its marvelous engine found in the Q50 Red Sport that I had the chance to check out once again this week.

The 2021 Infiniti Q50 Red Sport remains mostly unchanged from the past couple of years apart from having an attractive color palette to choose from and making a plethora of safety features standard on the lower-level Luxe trim. 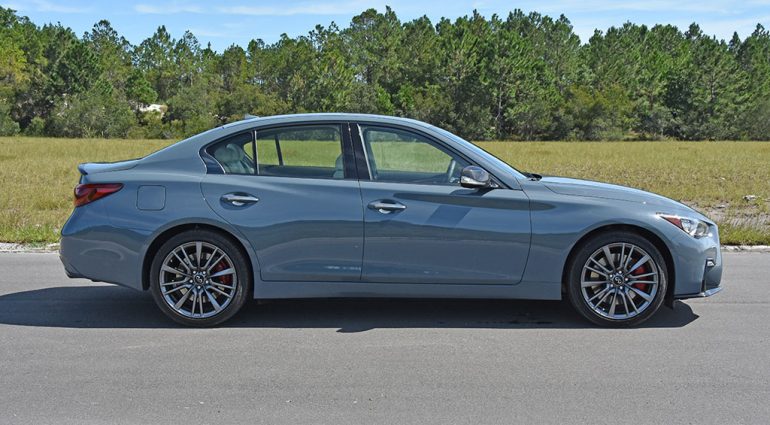 My test vehicle for the week, adorned in unique premium ($695 added) Slate Gray paint color and in the all-wheel-drive Q50 Red Sport trim, touts one of my favorite V6 engines in the past couple of years. The V6, as I have enjoyed in many other Q50 Red Sport and Q60 Red Sport test vehicles in the past couple of years, is a masterpiece. Its 400 horsepower and 350 lb-ft of torque are unapologetic and thrust through the respected chassis of the Q50 with eagerness and no lag or shyness. The only downfall for the engine is the somewhat antiquated 7-speed automatic transmission. While the 7-speed unit used to be praised, it has been surpassed by other transmissions in the crispness of shifts and the overall response to throttle inputs for modulating downshifts. Still, the Q50 Red Sport in the all-wheel-drive setup is good to get up to 60 mph in just 4.5 seconds with no drama or loss of traction. The rear-wheel-drive setup with a system feeding power the front wheels as well, firmly plants the 19-inch squared-size tires front/back to the ground. The 4-piston caliper brakes up front and two-piston out back do a good job to shave speed when needed. Fuel economy could be better, especially compared to other vehicles in the same class. However, I found it to be mostly consistent and matched the EPA-estimates of 19 mpg city and 26 mpg highway. 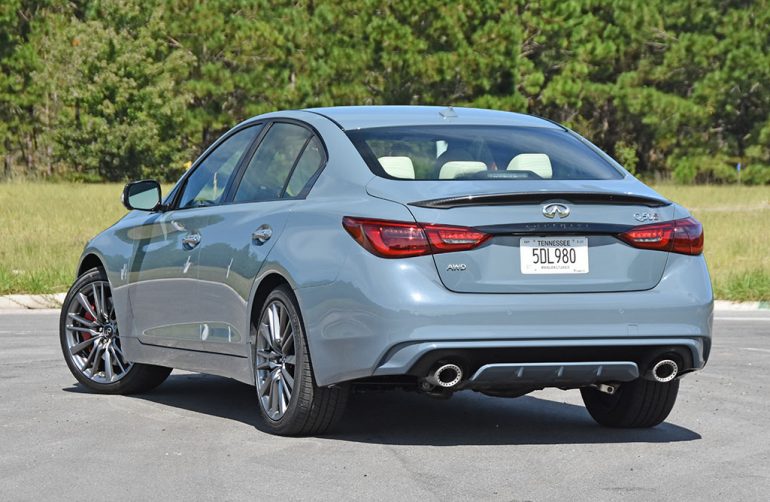 The ride quality is good thanks to the adaptive dampers that have two modes, a normal and sport that is changed with the drive mode selector or pre-set for the customizable Personal drive mode. The conventional electric-assisted steering of the Q50 Red Sport AWD tends to have a slow return to center and feels very disconnected – but is welcomed over the Direct Adaptive Steering (DAS) system, which is a feature that comes with the optional $1,950 ProACTIVE Package that my test vehicle thankfully does not have. My guess is that Infiniti moves away from the DAS system due to its completely unnatural feel and over-aggressive turn-in at times thanks to a steer-by-wire system that does not have a physical connection to the wheels in normal operation. I’ve said plenty about the DAS system in my several previous reviews of the Q50 and Q60. 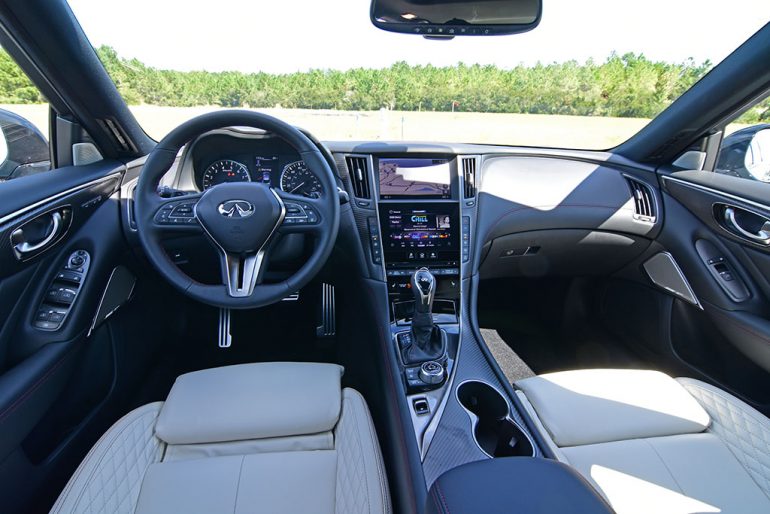 On the side of tech, the Q50 attempts to stay relevant by using the basic fundamentals of its two-touchscreen infotainment unit that’s been slightly updated in the past couple of years. Some of the updates include Apple CarPlay and Android Auto integration and faster processing. Other aspects of the Q50 feel a bit outdated, such as the instrument cluster, a manual parking brake pedal on the floor, and the 7-speed automatic transmission. Otherwise, the Q50 Red Sport is a “red hot” luxury sports sedan poised with ample performance and attractive looks thanks to the unique exterior color, darkened trim, and carbon fiber accents found on the mirror caps and rear spoiler. 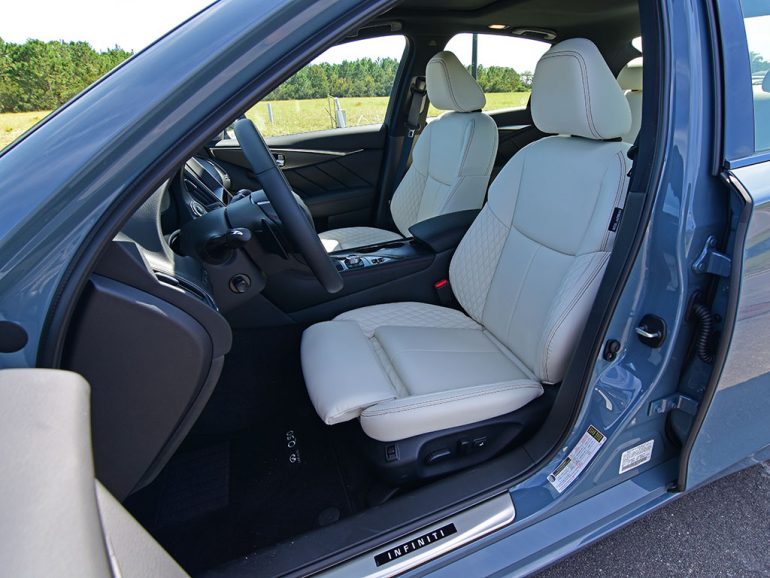 The updated interior colors and materials also attempt to keep the Q50 running with the competition, but such subtle updates only do so much for a platform that has aged. Pricing for the Q50 remains competitive and undercuts some of its competition with a starting price of just $36,600. Moving up to the Q50 Red Sport, which adds 100 horsepower from the base 300-horsepower V6 twin-turbo engine, you’re looking at paying at least $55,750. My AWD Q50 Red Sport test vehicle comes to a respected price of $62,065. 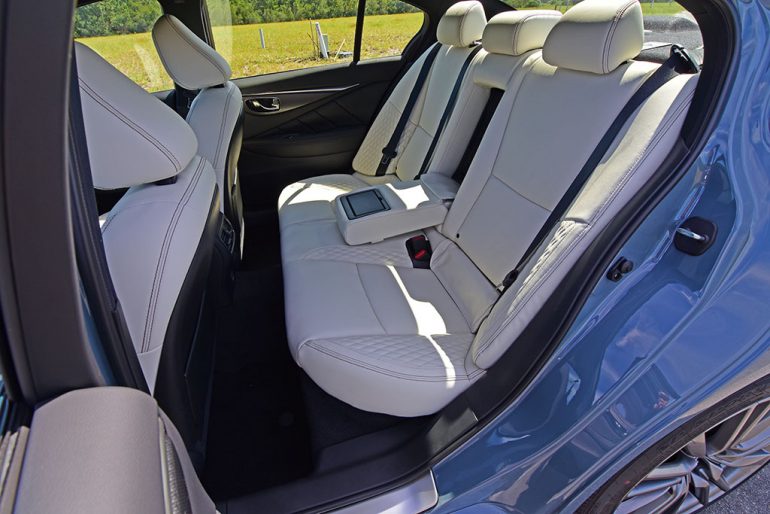 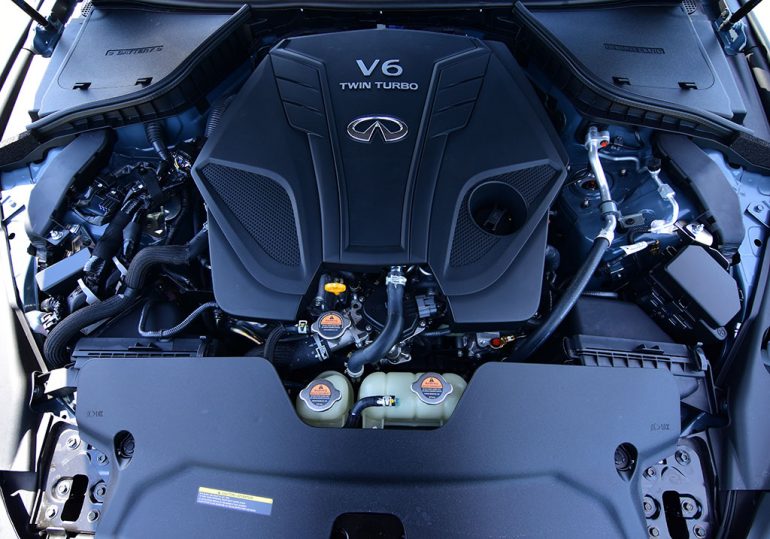 Magna taking a stake in Fisker, closes deal to build its SUV