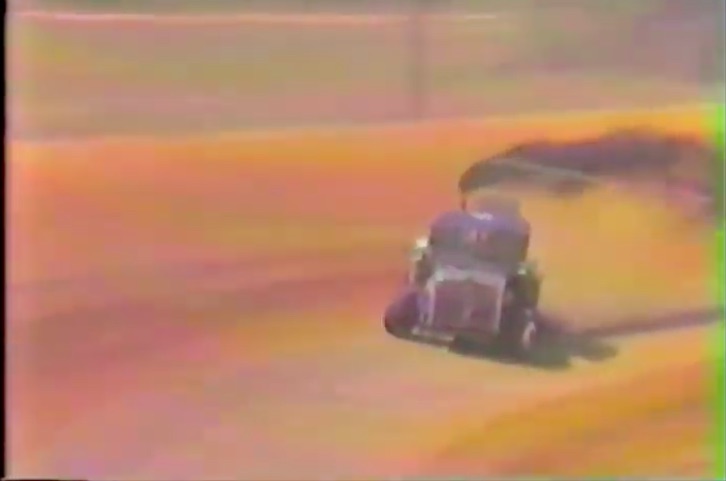 Few men were faster, few men were more fearsome, and few men were harder driving during the golden age of the Great American Truck Racing series than Charlie Baker. Whether on asphalt or dirt, the man was fast. Famously the truck you’ll see here was clocked at nearly 150 mph on the back straight at Pocono one year. Seriously, this guys was balls out all the time. You’ll even hear the announcer in this clip talk about how Baker was the winningest dirt track driver in the truck series. Pretty radical, right?

The Great American Truck Racing series ran for a period of more than a decade with its greatest days coming in the early and middle 1980s about when this video was shot. Running on long tracks, short tracks, dirt, and asphalt with modified big rigs powered by hot rodded diesel engines, this was really some kind of BangShifty dreamscape brought to life. Here, the series has gone to the small dirt track in Fayetteville, North Carolina and the drivers are making hot laps to get their stuff warmed up and their preferred line figured out.

The best part of this video is watching Baker gracefully slide the truck around the corners with great form. Yes, he over cooks it once and sends the thing into the sandy infield but if you are going to push it a little, especially during hot laps when are you going to?!

The noise seems to tell us that there is a built, turbocharged Detroit Diesel under the hood of the monster that Baker is driving. Everything about this rules.