The road transport department (JPJ) has issued a statement to inform road users with expired driver licenses which expired from January 13, 2021 that the deadline for renewal is June 30. This follows a prior statement by the JPJ which stated that those caught with long-expired licenses could have them revoked, and be made to re-sit driving tests.

Holders of these expired licenses will have to get them renewed before the deadline or they will have to re-take the driving tests, as required of first-time license applicants as stated in the Road Transport Act 1987 (Act 333). 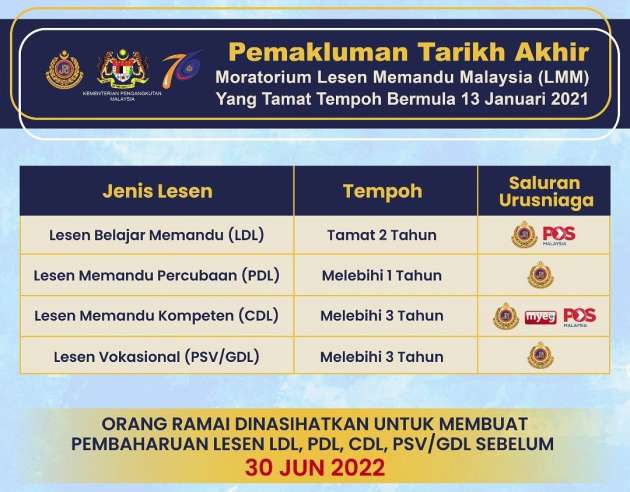 This came after the phase one implementation of MCO 3.0 that was announced by the Malaysian government from June 1, 2021 leading to the exemption announced by the minister of transport on October 14, 2021.

Meanwhile, users have also been advised to ensure that the road tax for their vehicles have been renewed by the same date, that is June 30, 2022 to avoid falling foul of the law according to Secion 23 (1) of the Road Transport Act 1987 for expired road tax. To that end, JPJ states that there are 4.4 million road tax discs that have not been renewed for three years for the period ending June 30, 2022.