Picture this: it’s the height of an automotive performance era, and executives at a car company are burning the midnight oil trying to figure out all sorts of ways to inject excitement into their car line. Execs are open to anything and everything at this time, so the pitchmen start slinging some crazy ideas. Suddenly, someone comes up with a whopper: tossing the drivetrain of one of the company’s most powerful performance cars into a seemingly innocuous family hauler. The stars align, and the engineers and bean counters let the idea sneak through the door and onto the streets.

You probably thought I was talking about some crazy big block musclecar engine in a station wagon, right?

The title of this article should tell you otherwise. I’m talking about a small 3-row minivan that snuck out of the back door at Mitsubishi at the height of the 1990’s Japanese performance car era. And the drivetrain and underpinnings come from one of the most storied rally cars in all of history: the very first generation of the all wheel drive Lancer Evolution. 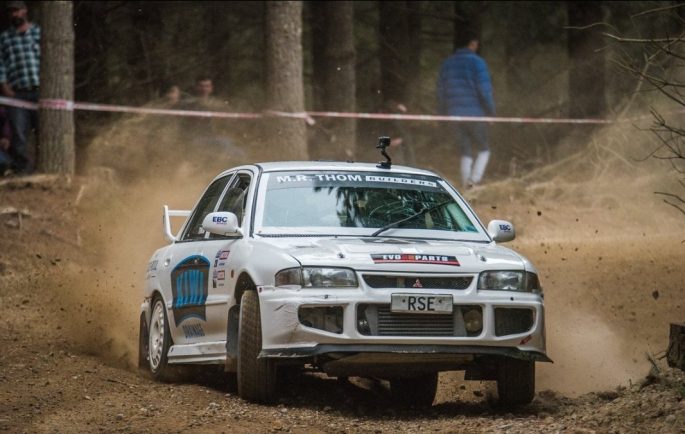 Mitsubishi’s legendary Lancer Evolution rally cars (and their homoglated street-going versions) were factory built rippers that really don’t need an introduction. Most likely introduced to the American market in virtual form via video games like Sony’s Gran Turismo series, we finally got these over here in the States in 2003 as the Evo VII. Six generations of that car tore up the gravel and tarmac elsewhere in the world prior to its arrival on American shores, all powered by the legendary 4G63 turbocharged 4-cylinder backed by a 5-speed manual transmission channeled to all four corners via all wheel drive. These fought storied battles with the likes of the Subaru Impreza WRX, the Ford Escort RS Cosworth, and others in the FIA World Rally Championship and the streets of Europe and Japan. Meanwhile, we got gutted versions of these platforms with buzzy econobox engines here in the States during the boom times of the 1990’s.

The vehicle I’m talking about is a Mitsubishi Chariot Resort Runner GT. Yes, that’s a lot of words. But when you add that suffix to the Chariot name, magic happens. It takes a pedestrian people mover and turns it into something positively nuts for its time. And we were allowed to sample one recently, fresh off the boat. Pardon the quick and dirty photos and let’s get down to business! 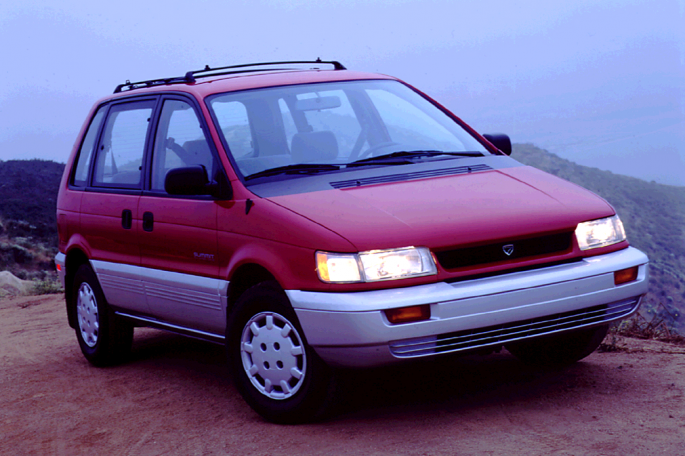 Remember the Eagle Summit? How about the Mitsubishi Expo? No? We don’t blame you. They were small minivans offered at Jeep/Eagle dealers in the 90’s that were affordable rides for A-to-B driving with the family in tow. They did nothing to light anyone’s heart on fire. Now check this out… 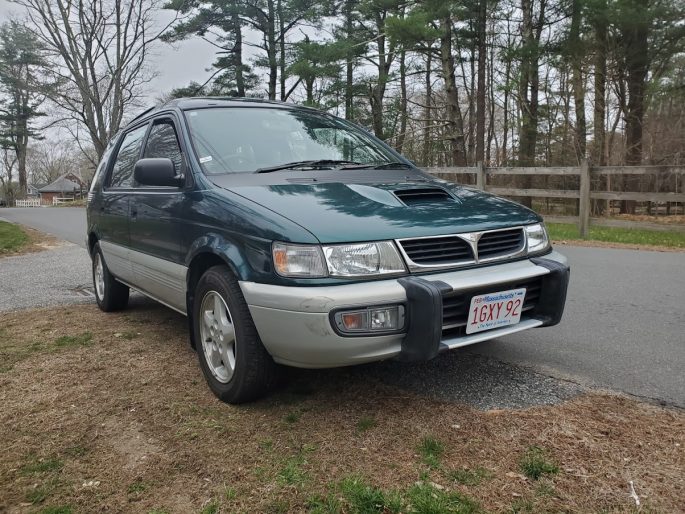 This thing is a Chariot Resort Runner GT. Easily distinguished from its plain jane brethren by the hood scoop, extra body cladding, extended front bumper, and that Popemobile dome on the roof. Yes, it’s weird. Yes, it’s rad as hell. And yes, it can still haul your family, and a lot quicker than the bland versions we got here. My friend Chris DiRado, an enthusiast of strange and awesome Japanese rides, recently acquired this to keep his 1st gen Mazda RX7, Mazda REPU pickup, and JDM Mitsubishi Delica Starwagon Turbo-D 4×4 company. (He likes his weird vans, that’s for sure.) 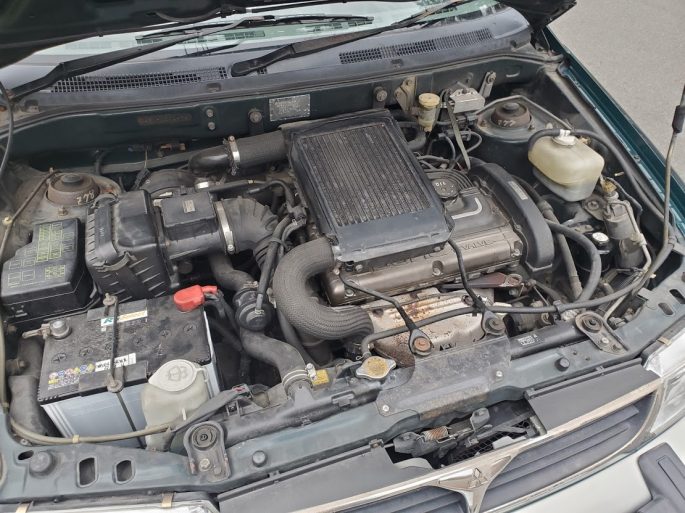 If you are familiar with the old DSM cars or Evos, this should be a familiar sight. This engine bay houses the brains of the operation: the turbocharged 4G63 2.0L four. In the original Lancer Evo, these made 244hp, which was strong power for the early 1990’s, especially when plopped in an economy car. Chris says that in this trim, they made a little less power (around 230hp). I’d like to think that’s due to the smaller top-mount intercooler and slightly more tame engine tuning. That said, it’s no slouch. 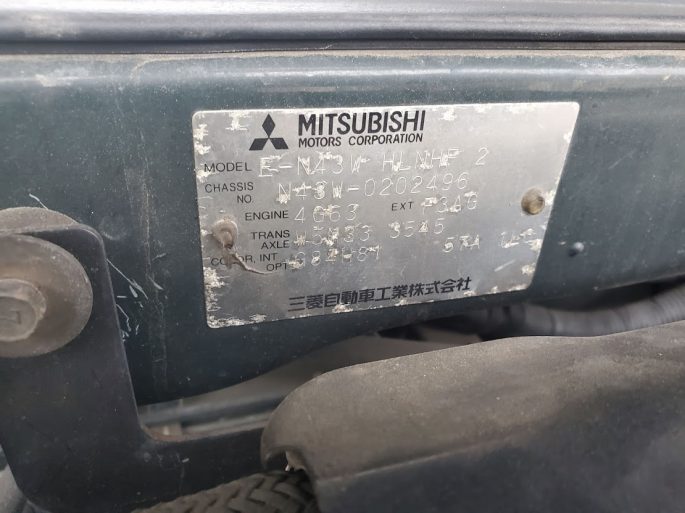 All sorts of rides ended up being powered by the 4G63 in its time. Thing of it as the Small Block Chevy of Mitsubishi’s lineup. We ended up with a few of them here in the States: the Galant VR-4, the DSM cars (Mitsubishi Eclipse GSX/Eagle Talon TSi/Plymouth Laser RS) and eventually, the Lancer Evolution VII and VIII. They made anywhere from 200-300hp in stock US trim, but just like the SBC, they are capable of space travel if you have the bankroll for it. And they stuck it in a MINIVAN. 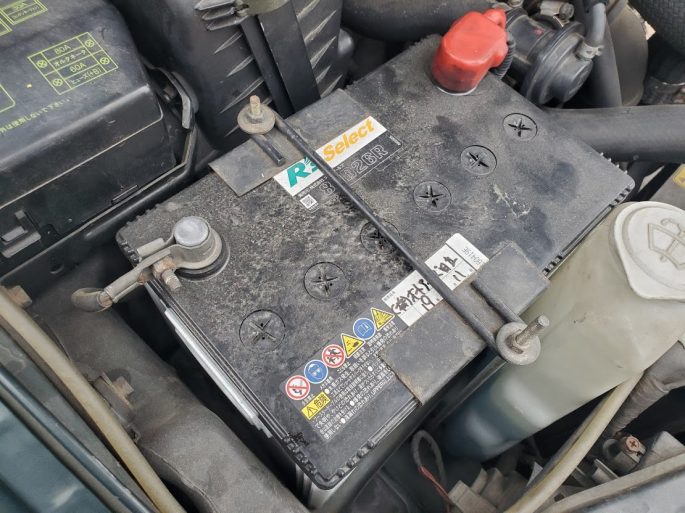 This van was truly just someone’s daily driver over there in Japan. As a car nerd, its cool to see how other parts of the world live through their cars. It has all sorts of Japanese stuff installed and attached to it, like this R’s Select battery, which you probably won’t find at your local parts barn. 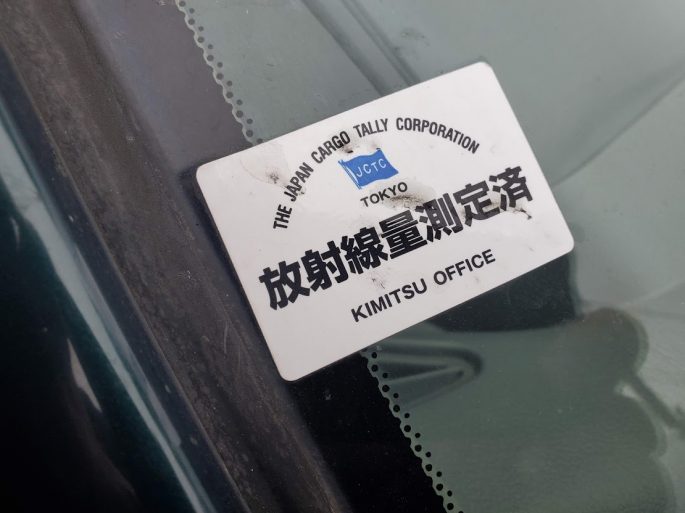 Aside from all the JDM maintenance stuff, there were all sorts of small, interesting bits, like this Japan Cargo Tally Corporation sticker. This may have been installed upon inspection when it left port on its way to the US. Google Translate tells me that the Japanese says something about the “radiation measurement” of the car. 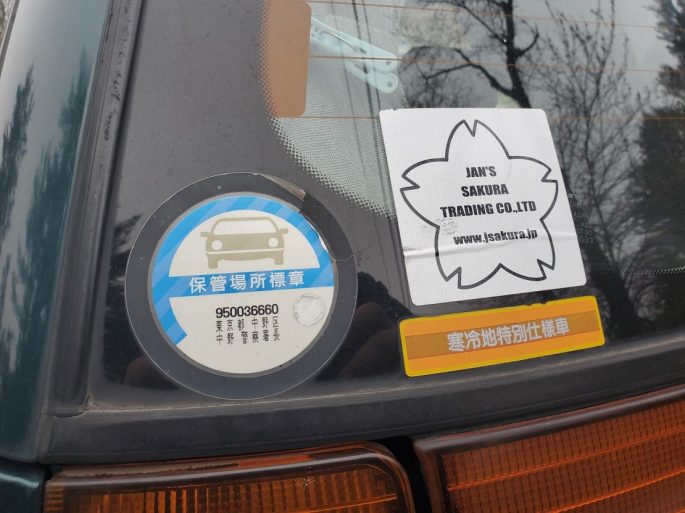 More stickers out back reveal its status as an everyday car. The blue circular one on the left appears to be a parking sticker, the white one is from the car’s exporter, and that yellow stripe very roughly translates to “cold and special”, whatever that means. Definitely more interesting than the old dump stickers that came on Project Power Laggin’. 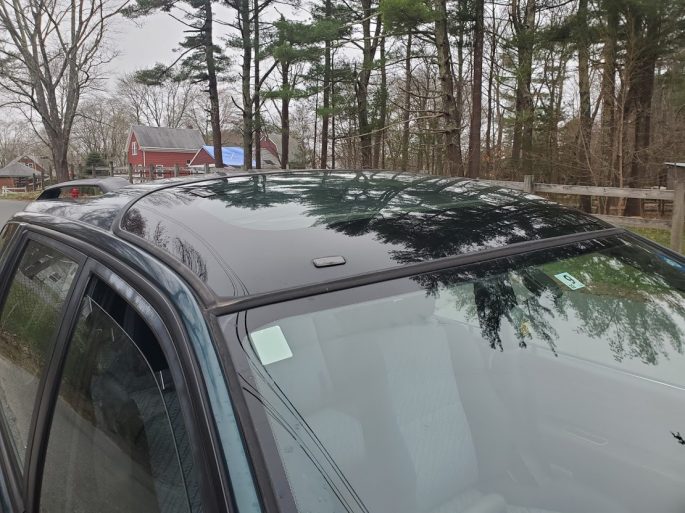 More evidence of weird, 90’s JDM-ness is this Popemobile-style bubble roof. The Japanese loved doing stuff like this. The roof is supposed to pop up like a sunroof, but it’s inoperable right now. Even without that functionality, it really opens up the cabin and provides headroom to goofy, taller American carcasses like mine. 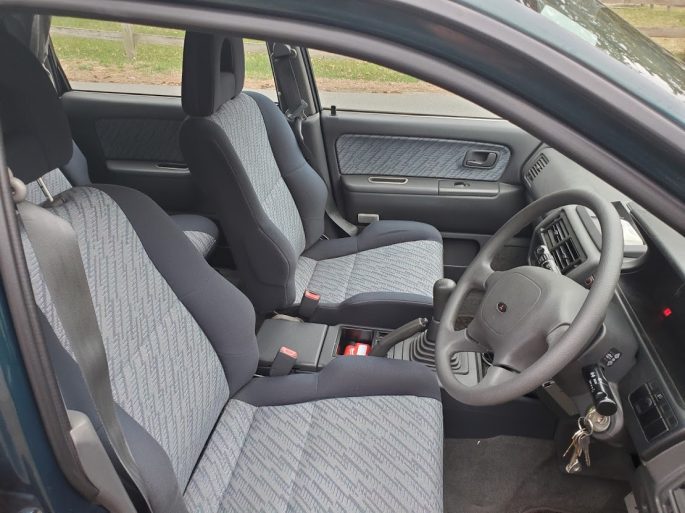 Inside, it’s your typical 1990’s Japanese car, complete with jazzy upholstery and gray plastic everything. The sport seats have just enough bolstering to grip you in the twisties, and everything else is bog standard mid-90’s stuff. Aside from the front seats, unsuspecting American passengers have no idea what they are in for. That and the obvious driver’s seat on the opposite side of the car. 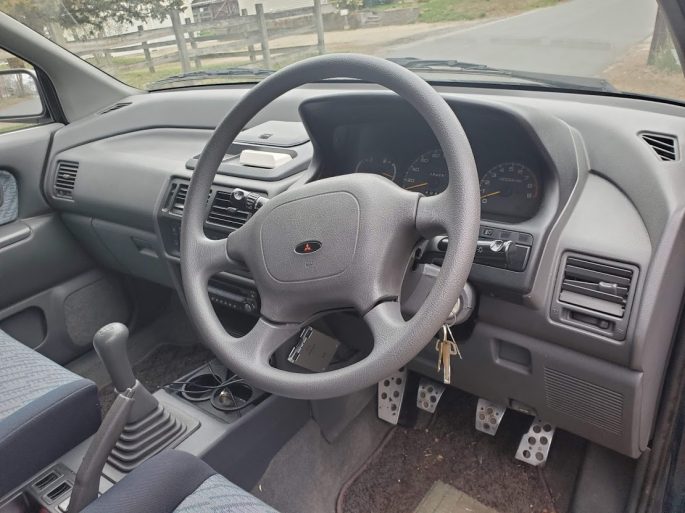 This car is still equipped with some Japanese daily driver gear on the inside as well. See that silver box that looks like an old floppy disk drive attached to the center console peeking through the steering wheel? That is some sort of toll card reader, much like the EZ-Pass systems many states have here. And periodically, a very nice lady says something in Japanese over the speakers, probably reminding drivers to remove the card before exiting the vehicle. The driving position is more upright than your typical econobox, kind of like sitting at a desk rather than sitting in a performance car. The wheel is on the large side, and the shifter is very tall, but it works in concert while driving (more on that in a bit). You also get drilled pedals, because JDM, yo! 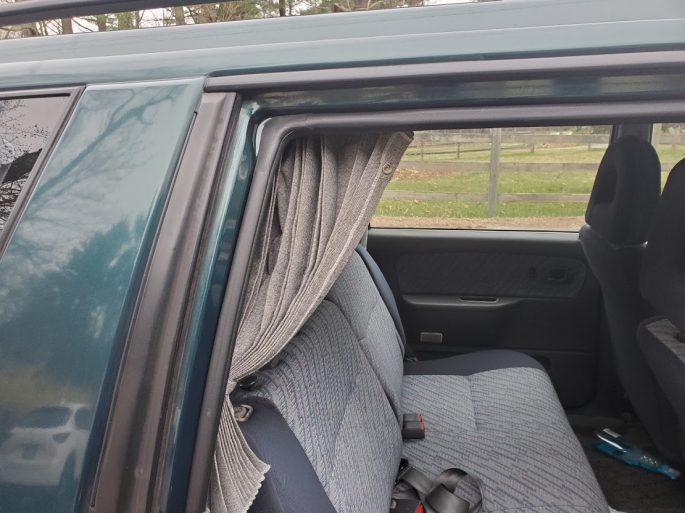 Another oh-so-Japanese thing are these rear curtains. Lots of Japanese vans have curtains like these. Cool for van activities like sleeping and… uhh… blocking out the sun. Yeah, that’s it! 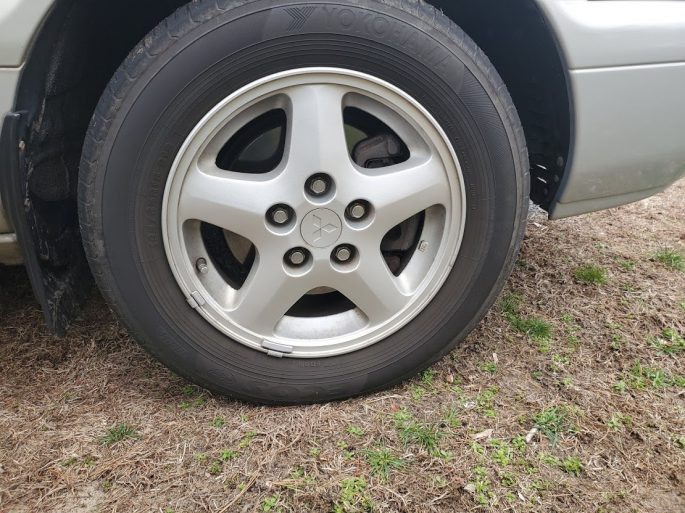 Another cool feature: these get bigger wheels, tires, and brakes than the plebian offerings, along with 5-lug hubs. Of course, all the stuff behind these five spoke alloys are Evo bits. On a freaking minivan. From the factory.

So, we’ve laid a baseline of expectations for you to ponder. The real question is how does it drive? In a word, entertaining, and in more ways than one. If you’ve driven any of the various 4G63T-powered vehicles over the years, the first thing you notice is that exhaust note. I’ve spent time in DSM cars and Evos over the years, and the audio is the same. The feel of that drivetrain is the same as well, which means this van pulls like a freight train once boost starts happening all the way to redline. It’s addictive, to say the least.

What’s not the same is that I’m sitting in what’s usually the passenger seat while doing it, shifting with my left hand, and fumbling for the turn signal stalk that’s on the right of the wheel instead of the left. This was my first time in a right hand drive car, and man, it’s STRANGE. You have to adjust your view and road position to accommodate so you don’t end up over the center line, and I spent about 5 minutes saying “Whoa, weird!” over and over. Then, there’s the seating position. These aren’t made for us large and tall Americans, and I felt like I was driving, well, a minivan. Because it IS a minivan. There are three rows of seats believe it or not, but it’s quite a bit smaller than something like a Dodge Caravan. You could probably park this thing in the back of one of those.

This also gave me flashbacks to another Japanese people mover that I used to own: my old 2002 Subaru Impreza WRX Wagon. Like my WRX, the 1-2 shift is basically a chore that gets you to the fun stuff in 2 through 5, as the AWD system requires a little finesse to get off the line. The driving experience is similar, the power level is damn near even, and