Recently the Delhi government delisted Tata Nexon EV, the electric version of Tata Nexon car, from the subsidy scheme for electric vehicles following complaints that the model failed to meet the specified range of 312 km on a single charge as certified by the Automotive Research Association of India (ARAI). The complaint also mentioned that the vehicle had reached a speed of 200km on a single charge, which is way beyond the eligibility criteria of 140 km.

A similar case occurred in the US with Tesla cars. Like ARAI, EPA is an independent executive agency of the United States federal government tasked with environmental protection matters. One of their functional departments works in vehicle mileage certification. During several test runs and multiple iterations with multiple drivers, Edmunds (a private company) reported that when compared with other EVs like the Ford Mustang Mach E, the new Volkswagen ID.4, the Tesla Model Y, Model 3 Standard Range Plus and Model 3 Long Range gave an underestimated range from the EPA range values. As per the report released by Edmunds, the real vehicle range for all the Tesla variants had a negative range suggesting that they never met the EPA estimates and hence failed to give as what the customer always expected.

Consumers are more interested in “Kitna Deti Hai” than the technology that goes into sustainable mobility. There are many Youtube car reviews that refer to the estimated range or ARAI estimate (in India) or EPA estimate (in the USA) for deciding the range of the car. But is that a good reference to start with while purchasing your dream car? Let us deep dive into what exactly it means”.

Consumers tend to think that the ARAI-certified mileage report, which lists estimated fuel economy ratings, is what they will get while driving their car. Unfortunately, this is another situation covered by the saying, “Read the fine print.” The fine print says, in essence, actual mileage may vary depending on a whole lot of things.

The dispute and the consequences are mainly owing to the undue importance given to the “Kitna Deti Hai” approach, customers have towards fossil fuel vehicles and its literal adoption for electric vehicles. It is important to know how these agencies test and certify the EVs

How do they test?

There’s a small glitch. First, the vehicle is fully charged and parked overnight. The following day, the vehicle is driven on a dynamometer — it’s like a treadmill for cars — over the successive simulated city and highway routes until the battery is depleted. The total distance traveled is then multiplied by a correction factor that the certified authority has determined will more accurately reflect what drivers can expect to achieve in the real world.

“Consumers tend to think that the ARAI-certified mileage report, which list estimated fuel economy ratings, is what they will get while driving their car. Unfortunately, this is another situation covered by the saying, “Read the fine print.” The fine print says, in essence, actual mileage may vary depending on a whole lot of things.”~

The tests are carried out in the cars in a controlled environment and provide an estimated/claimed mileage for the vehicles. The real scenario is that fuel economies of vehicles are no way close to the ARAI figure.

Well, there are more things to add, what’s the battery range if 2 passengers are sitting one in the front and one in the rear with a 25-degree air conditioning ON. What will be the range change when I commute to the same place every day with a 100% battery charge? Well, there are several factors to look into. Batteries have very strange chemistry. When charged more or less the battery SOC (State Of Charge) decreases, the rate of charge also affects the type of charger, the driving cycle, the amount of acceleration, regeneration, etc.

It is really difficult for a real customer to get a good result between the actual and estimated range ratio. The ARAI testing is highly controlled and standardized, but as found in real-world driving, the correlation can vary dramatically depending on the vehicle.

What you as a car shopper need to know is that the petrol/diesel mileage you get could be less. A lot less. Before you begin hatching some conspiracy theories involving oil companies, the Indian government, and carmakers, you should look at where these mileage estimates come from.

The study done by Edmunds showed how Tesla, now one of the highly valued auto companies, has failed to come up with what is known as EPA Estimate Range. 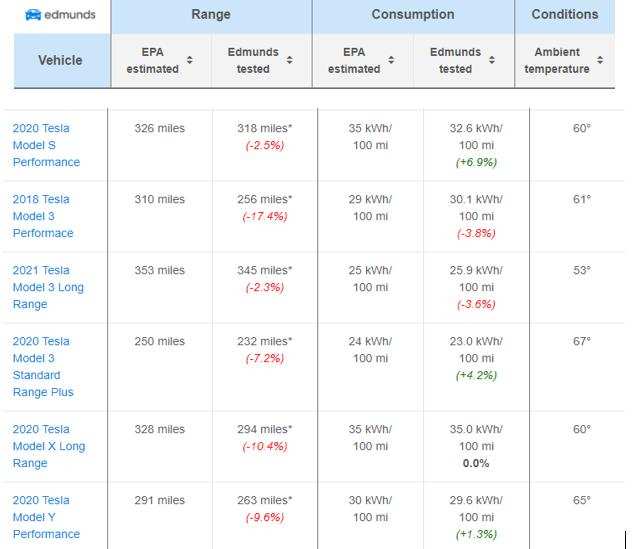 Many Tesla owners in a forum rejected this study and came to an argument that all the tests were not carried out in a controlled environment and hence the tests deviated from the actual tests. Some Tesla fans also questioned about the type of charging to 100% and did the test drivers stop the vehicle when the odometer indicated as 0 miles before the vehicle coming to a stop.

Overall, the figures are intended to provide EV owners and potential customers with an additional data point so that they can make more informed decisions. It’s very tricky to conclude as to which EV performs better at what point. Unlike a normal IC engine which one can decide based on the grade of fuel and the maintenance history of the car, it’s kind of a grey area when it comes to an electric vehicle as the real-time internal dynamics of the lithium batteries keep on changing resulting in different EV range.

The Indian customers who are more towards “Kitna Deti Hai” can come to a standstill when it comes to driving electric vehicles. With the current road conditions especially in tier 1 and tier-II cities, EVs will play an upper hand when compared to the normal IC engine with the concept of regeneration that can keep the passenger happy while keeping his/her air conditioning ON at chill mode.

(Disclaimer: The author has done MS in automotive systems engineering and has worked for 4 years in the US for a fortune 500 US automotive company. Views expressed are his own.)

Michelin looks to become more than a tire company