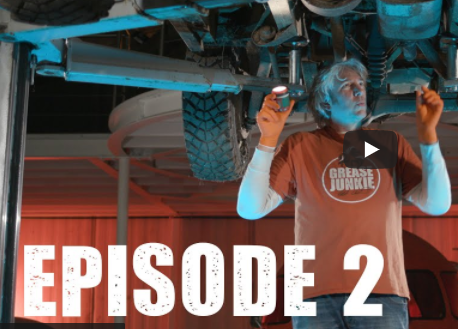 Like any good hot rodder, Edd China is all about hauling something out of it’s near grave and making it good again and that is exactly what’s starting right here with a friends Range Rover. It’s been sitting wasting away and Edd’s got in the workshop to figure out what it needs, how to do it, and when to stop. We are just thrilled to see Edd back in front of the camera and are excited to see where this new series will go.

Edd China, the incredibly tall, talented, and quirky mechanic from the show Wheeler Dealers is on to new endeavors. After leaving the Wheeler Dealers show he went on to lots of other adventures, wrote a book, and lots more, but now he’s got a new show coming to YouTube that he’s sharing with all of us. As he tell us himself, he’s not great about shooting video and editing it and sharing what he is doing, but now he’s got a group of people that want to help him make great stuff so there will be a new episode every single week.

The name of the new “show” is Edd China’s Workshop Diaries and will follow along with anything and everything he’s working on or tinkering with in the shop. We’ll get weekly updates and lots of fun stuff as he not only repairs old stuff, but also works on very new stuff as well. Oh and he’ll be doing some electric vehicle conversions too, which I’m particularly excited to see as well! I know that sounds funny, but stay tuned. I think this could be cool as hell.

Win A Complete Set Of Wheels From Holley! You Pick Them, They Ship Them!