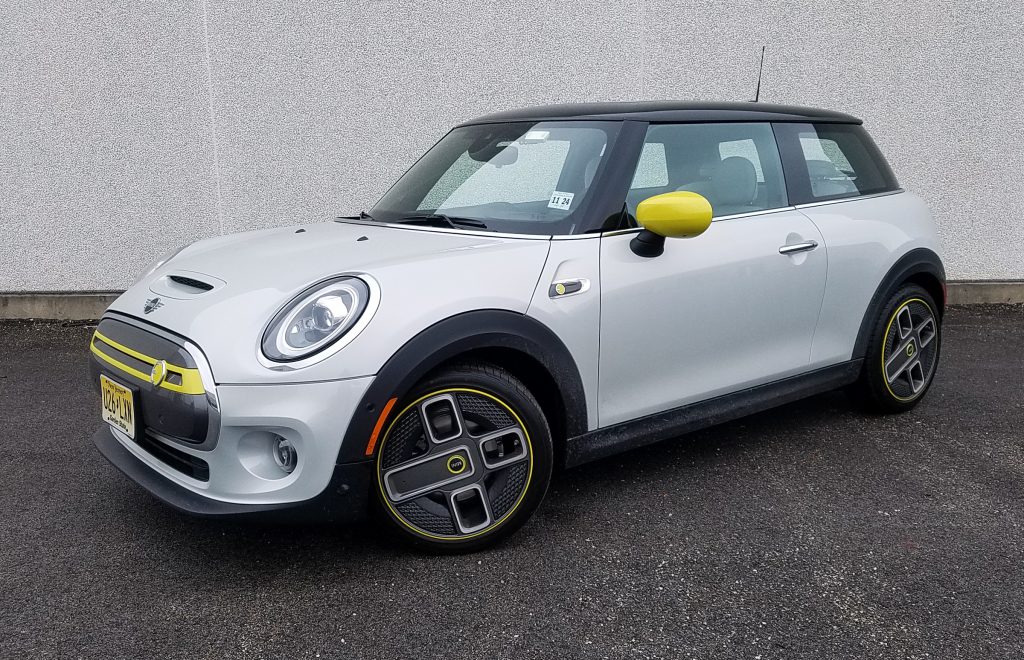 The great: Peppy acceleration; nimble handling; fun, expressive styling inside and out

The not so good: Maximum driving range is subpar compared to most EV rivals; stiff ride quality; cramped rear seats are best suited for small children 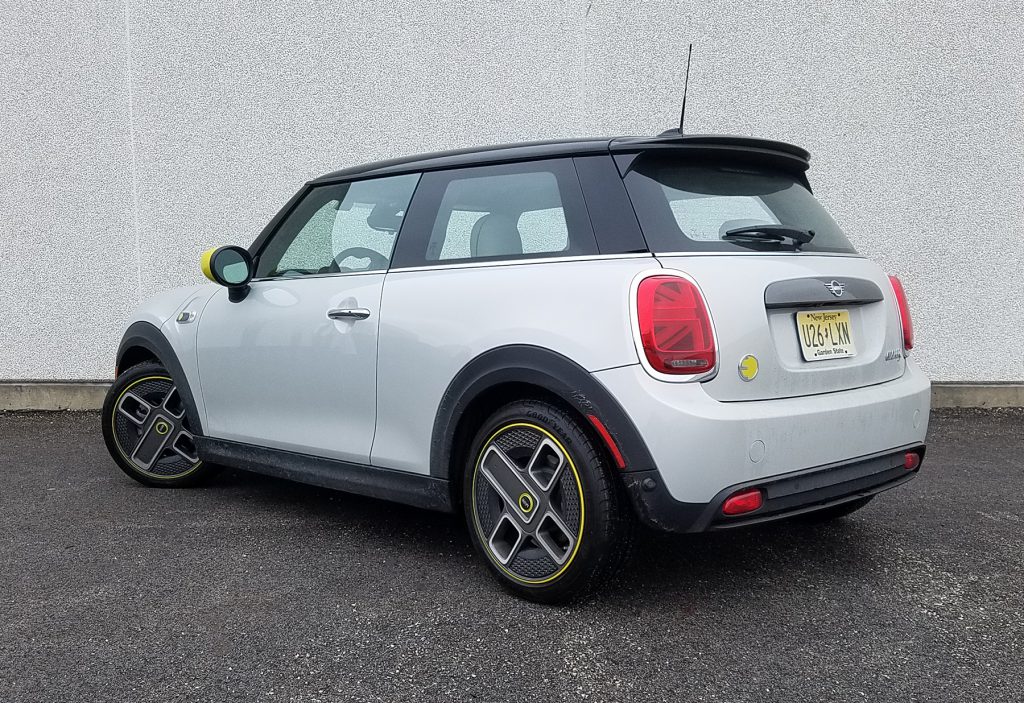 The pure-electric Mini Cooper SE wears several unique trim touches that set it apart from its gas-engine kin, including a distinctive grille insert, wheels, and special badging. The novel taillights have a British-flag “Union Jack” motif.

Here’s the good news, though. The Mini Cooper SE is, well, a Mini Cooper. Like all Minis, its neo-retro styling is fun and exuberant inside and out. And like all Mini Coopers, the SE feels tailor-made for being driven briskly through curvy, winding roads—the conversion to a pure-electric powertrain hasn’t sullied the host car’s nimble, athletic character. The 32.6 kWh lithium-ion battery pack is mounted in the chassis, underneath the seats, so the car’s center of gravity stays low, and the Cooper Hardtop’s sporty suspension tuning and accurate, communicative steering feel carry over intact. Unfortunately, the ride quality—already quite taut in performance-focused gas-engine Cooper Hardtops—gets even stiffer in the SE. Also, EV batteries are heavy, so the SE ends up a bit porkier than its siblings, though not outrageously so—its curb weight checks in at 3143 pounds, compared to 2841 pounds for the Cooper S and 2951 pounds for the high-performance John Cooper Works Hardtop. 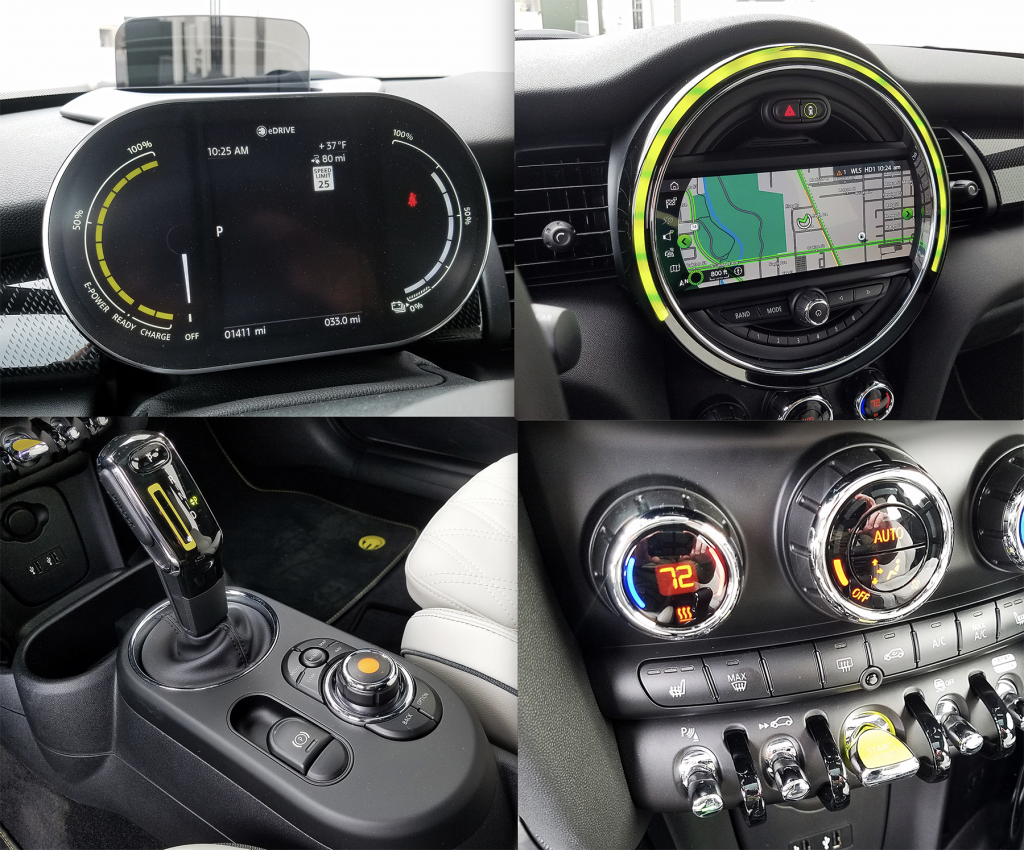 The Cooper SE gets a fully digital gauge panel with “e-Power” (percentage of available power) and battery state-of-charge readouts, a centrally located infotainment screen housed in a circular bezel, an infotainment-system control panel aft of the shifter, and climate controls and novel toggle switch controls (including the start/stop switch) in the lower center of the dash. Scroll down to our gallery below for a shot of the dashboard itself.

The Cooper SE has a 135kW electric motor that makes 181 hp and 207 lb-ft of torque—comfortably above the hp rating of the base Mini Cooper’s 131-hp turbocharged 1.5-liter 3-cylinder, and a shade below the sport-tuned Mini Cooper S’s 189-hp turbo 2.0-liter four. The “instant-on” torque-delivery characteristics of an electric motor benefit the SE’s satisfyingly quick acceleration. Mini says the 0-60-mph time is 6.9 seconds—not far off the gas-engine Cooper S’s quoted 6.4-second time—and if anything, that figure feels a bit conservative by the seat of our pants. 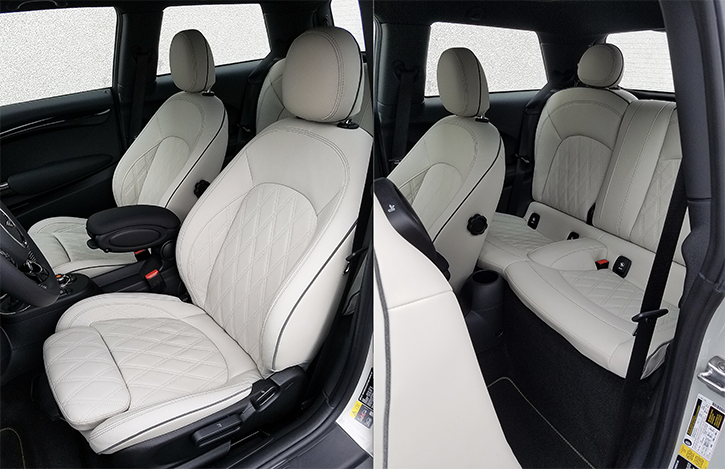 Handsome Chesterfield leather upholstery in Satellite Grey helps give the Cooper SE’s cabin an upscale feel, as does the diamond-pattern stitching on the seat inserts. The cramped rear seats are best suited for small children.

Like almost all electric vehicles, the Cooper SE uses a regenerative braking system. The brake-pedal feel can take some getting used to if you’ve never driven an electric vehicle before, but most drivers will acclimate in short order. The SE’s level of brake regen can be selected by the driver—the most aggressive setting enables virtually “one-pedal” driving, meaning that the car can be brought to complete stop in some situations by simply lifting off the throttle pedal and not using the brake pedal at all. The brake regen helps conserve the battery’s power, but when the battery is depleted and it’s time to plug in, the Cooper SE can be recharged in about four hours on a Level 2 charger, or 24 hours on a standard 120-volt outlet. A 50kW Level 3 fast charger can charge it up to 80-percent full in less than 40 minutes.

Considering that regular gas-engine Mini Coopers reside on the high end of the price spectrum for a subcompact-sized hatchback, the base Cooper SE’s starting price of $29,900 isn’t too hard to stomach. Our test vehicle was fitted with the Iconic Trim package and Touchscreen Navigation Package, which are bundled together and added $7000 to the bottom line. Included in the Iconic package are power-folding/auto-dimming exterior mirrors, auto-dimming rearview mirror, panoramic sunroof, Harman Kardon premium audio system, head-up display, Park Distance Control, and Parking Assistant. The Touchscreen Navigation Package adds Apple CarPlay connectivity, Mini Connected remote-access capabilities, wireless charging, and a navigation system. 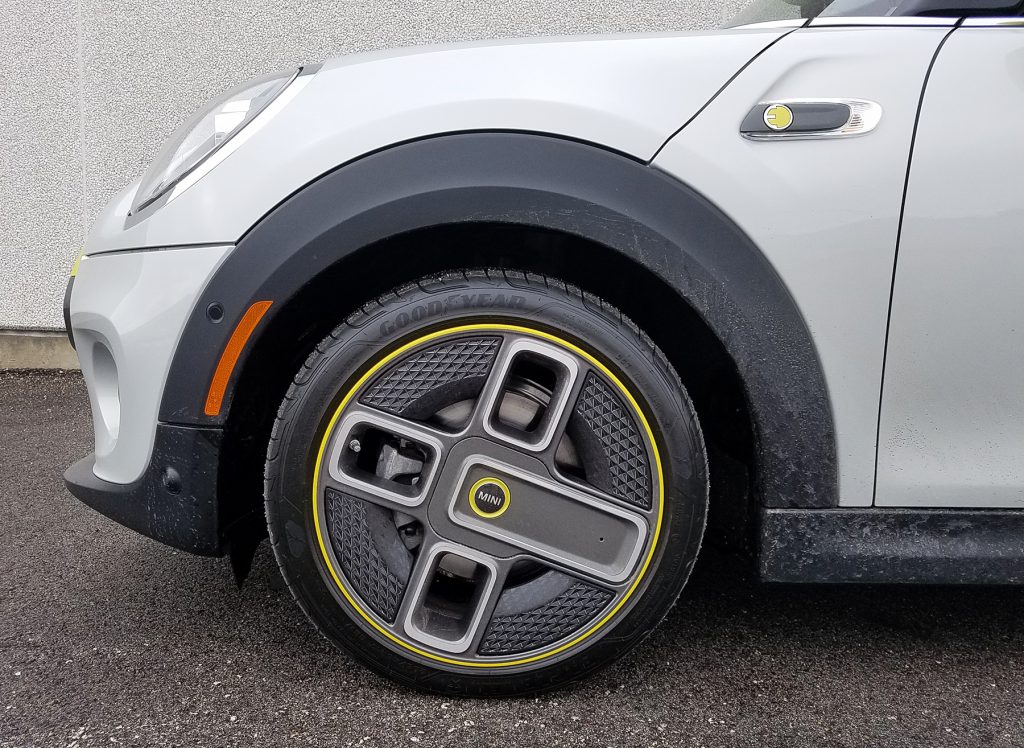 The Cooper SE’s exclusive 17-inch “Power Spoke” wheels are designed to resemble to the look of a British power outlet.

Add in the $850 destination fee, and the final price of our tester was $37,750. That’s at least in step with the pricing of nicely equipped gas-engine Mini Cooper Hardtops, and comfortably below the $43-45K price tags of the Chevrolet Bolt EVs and Nissan Leafs we’ve tested. And, the Cooper SE is still eligible for the $7500 federal tax-credit rebate if you qualify, as well as other state and federal incentives.

Though the SE was added as a mid-2020 model, it carries over with no major changes for 2021 or 2022—Mini is even holding the line on that $29,900 base price. Clearly, the Mini Cooper SE is not a road-trip machine, but if you’re looking for a daily commuter that doesn’t drink any gas and delivers genuine driving fun and spunky styling that other EVs don’t match, the Cooper SE is worth checking out. 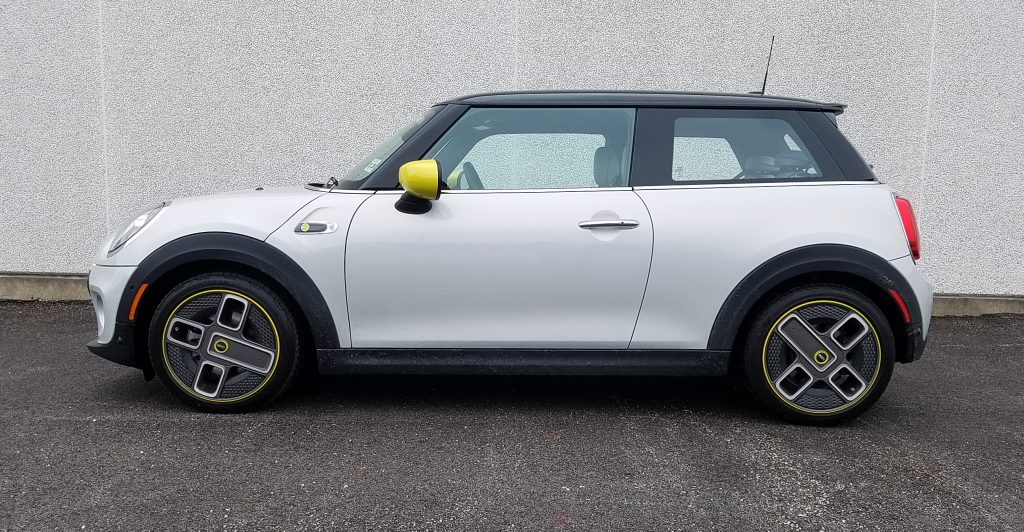 BangShift.com Nerd Welding Project: How To Make A Firepit BBQ Grille That Any Star Wars Fan Will Love