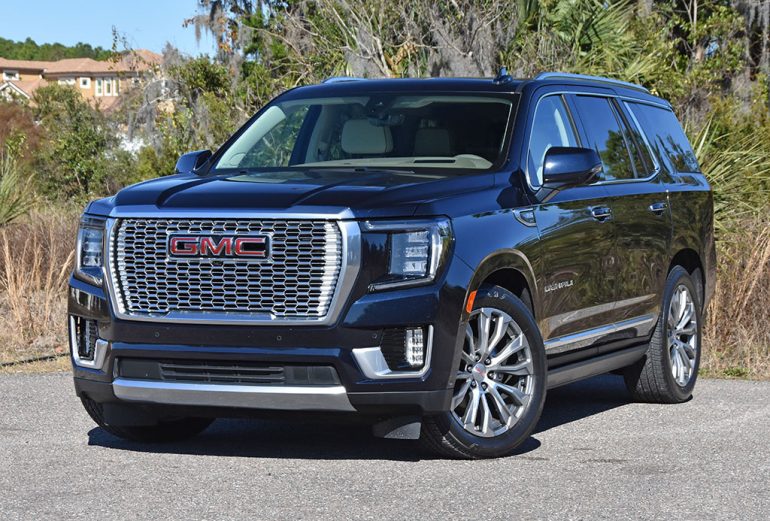 The trio of Chevrolet, GMC, and Cadillac body-on-frame SUVs from General Motors have been a force to reckon with over many years. Marking its fifth generation with a complete redesign for the 2021 model year, the Chevy, Cadillac, and new GMC Yukon that is in my possession have attempted to redefine the large SUV segment. After a long week with the Yukon Denali trim, I can say with certainty that GM has made a valiant effort in their quest to shake up the large SUV segment.

Fitting in between the Chevrolet Tahoe and Cadillac Escalade, the GMC Yukon has known been a perfect alternative for those who want a little “more” out of the Tahoe and just a little less in all of the luxurious plushness that’s found in the Escalade. In my thought, the GMC Yukon Denali is a perfect compromise, and the 2021 model year is the best Denali yet, riding on a new optional air suspension system and setup that has much improved the ride quality. 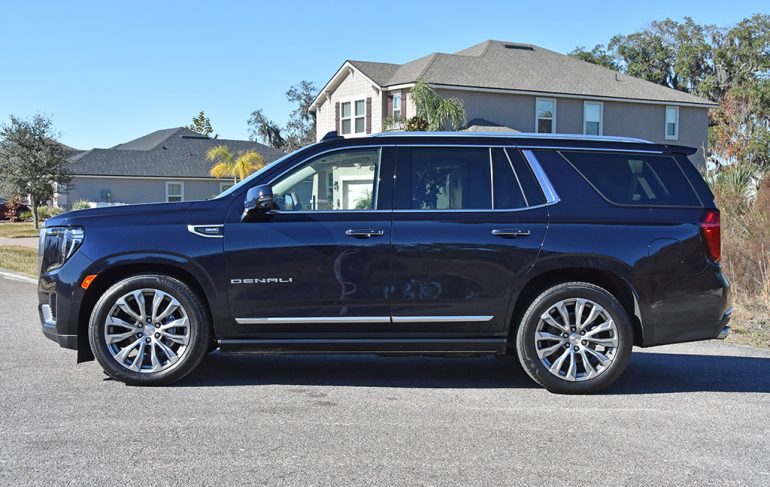 Returning to the GMC Yukon Denali is the brand’s proven powerhouse, the 6.2-liter V8 engine that’s mated to a nicely programmed 10-speed automatic transmission. While the drivetrain doesn’t change much, everything that’s propelled by the 420 horsepower and 460 lb-ft of torque V8 engine with cylinder deactivation has improved. There’s a new level of compliance that’s felt throughout the new 2021 Yukon Denali, something that’s pretty special in the re-engineering of the chassis. The new engineering goes the distance to nearly eliminate the outgoing model’s body jiggle and the harshness felt when road surfaces are not ideal. Performance remains mostly the same, but the new Yukon Denali feels a little lighter on its 22-inch wheels and all-season tires. 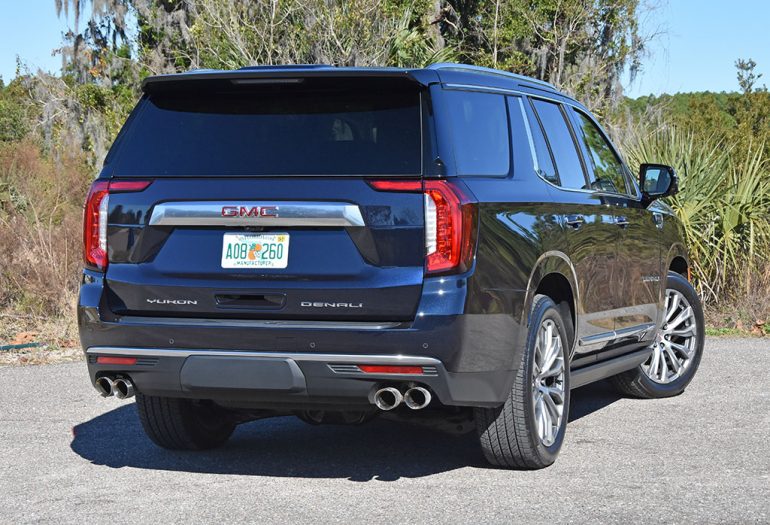 Fuel economy is one of the couple items that were not improved in the 2021 model year Yukon, using virtually the same powertrains of the past. Still, the Yukon Denali 4WD gets a consistent 14 mpg city, 19 mpg highway, and 16 mpg combined. Through the use of a seamless cylinder deactivation system and some “smart” coasting on my part, I saw a little over 20 mpg on the Interstate traveling right at the posted speed limit with just me in the vehicle. So, there’s that. 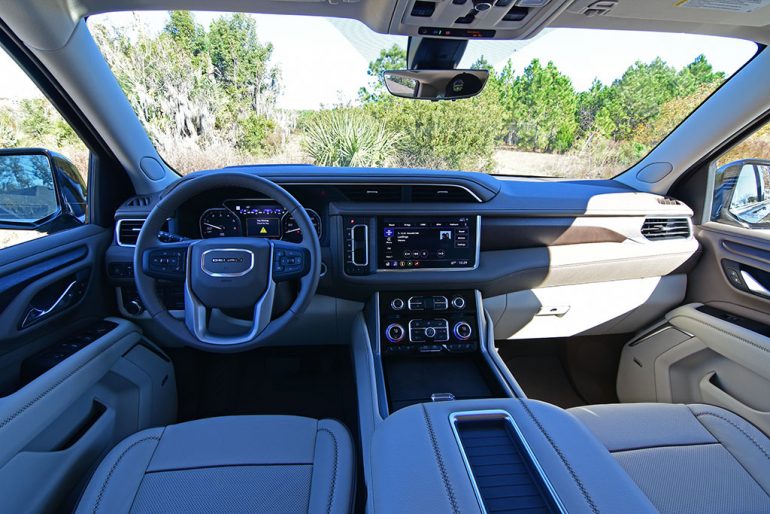 While the Denali is the top-trim of the Yukon lineup, it doesn’t attempt to overshadow its not-so-distant Cadillac Escalade cousin, where there are many “luxury” features that are reserved for the Caddy, such as massage seats and that crazy-large 38-inch screen setup. What you do get in the Denali, which isn’t necessarily cutting corners, is a nicely laid out cabin with the central focus on a 10.2-inch infotainment touchscreen that incorporates Android Auto and wireless Apple CarPlay (can also be paired via USB). Also, the Yukon Denali, when loaded up, affords you power-retractable side steps, adaptive cruise control with all of the expected active safety tech, a large color heads-up display, 360-degree camera system, rear camera mirror (live digital camera feed of the rearview), in-vehicle trailering app, dual-pane panoramic sunroof, dual 12.6-inch rear-seat entertainment touchscreens, and the air ride adaptive suspension system. 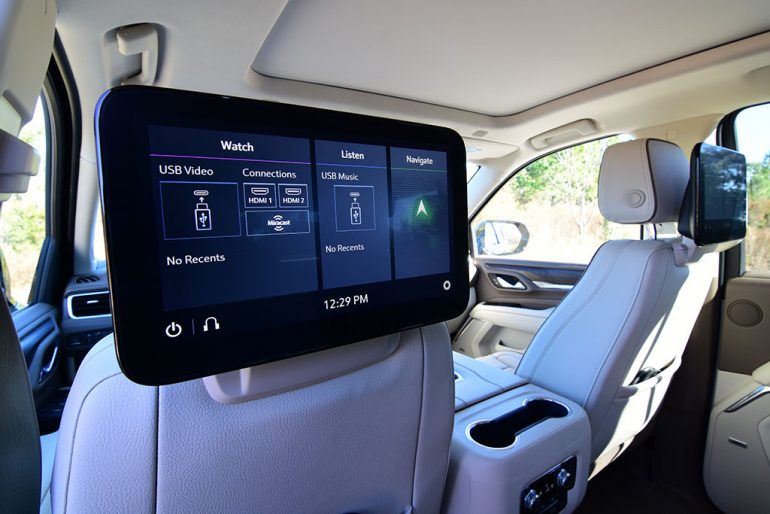 Diving into more about the ride quality of the 2021 Yukon Denali, when equipped with the air ride adaptive suspension system, which is part of the optional $11,255 Denali Ultimate Package that includes all of the equipment mentioned above, the large and in-charge SUV is transformed, in a good way. GM did their homework with the air suspension system for such a large SUV, which is in part thanks to pairing their highly praised magnetic shocks with the adjustable air springs. There’s nothing overly soft about the ride quality, nor is it too firm. With just the right amount of smoothness, the air ride adaptive suspension is a marvel that can be set to lower 2-inches automatically upon placing the vehicle in Park for easy exit and entry. The system can raise the vehicle an additional 2-inches from the normal ride height for the off-roading drive mode or manually adjusting the ride height through a knob on the dashboard. I did find that the system will often make several height-balancing adjustments when the vehicle is stopped to keep things “level.” Overall, the Yukon Denali, and potentially its Escalade cousin, has the best ride quality and dynamics for an SUV in its class thus far. The Yukon Denali almost feels sporty at times – in the scheme of comparing it to all large body-on-frame SUVs. There’s assured control and confidence inspired in the driver, and it’s relatively easy to maneuver – especially when you can utilize the multi-angle 360-degree camera system that can be brought up at any speed but goes away automatically after several seconds when driving. 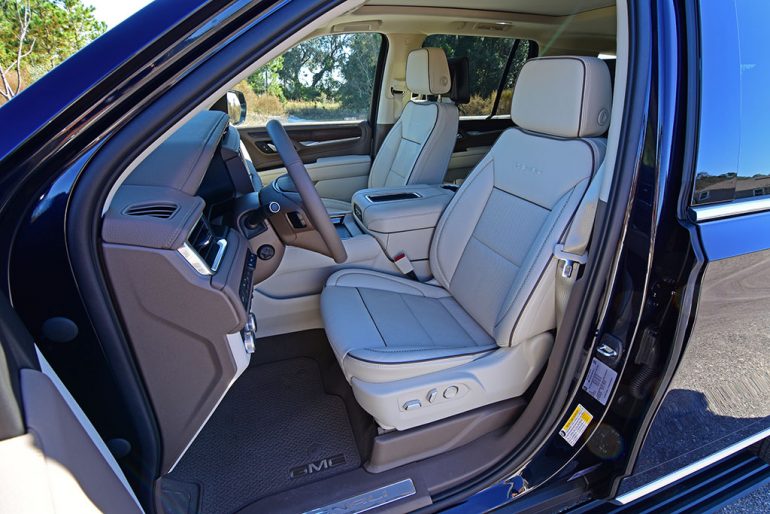 Taking in the attractive design and aesthetics of the redesigned 2021 Yukon Denali, many will notice that the “look” doesn’t depart far from what has worked for the GMC Yukon for many years. From the unique quad-exhaust outlets out back to the front facia housing new LED headlights, resembles the GMC Sierra Denali pick-up trucks, making the new Yukon Denali fit the proper SUV mold to appease most. It’ll even tow up to 8,200 pounds and haul around 1,671 pounds with Max Trailering Package included with the air suspension option. 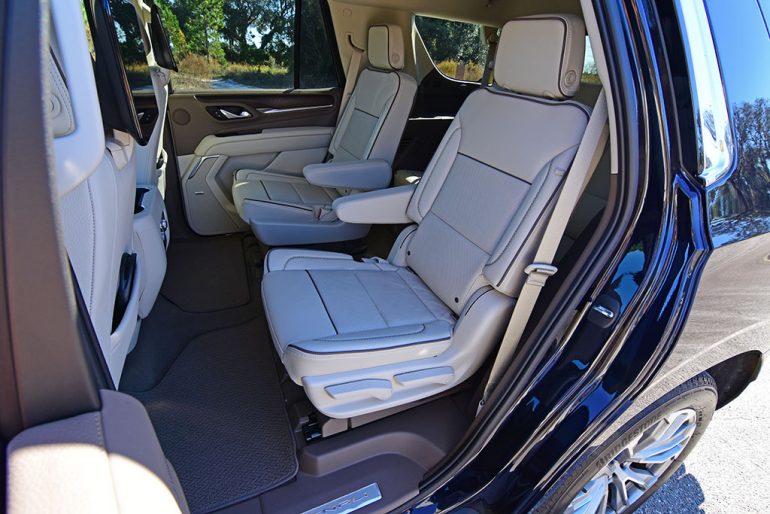 The interior of the new GMC Yukon Denali is plush enough for a premium SUV and borders on the luxury line. Fundamentally, the Yukon Denali’s cabin is as luxurious as you will find before moving to something like the new Lincoln Navigator and Cadillac Escalade. There’s plenty of soft-touch surfaces, real aluminum trim, and delightfully-placed matte-finish open-pore wood trim. Even the front center armrest and storage compartment is a power-slide unit that slides back to reveal a secret compartment for hiding items. In terms of comfort and space, the Yukon Denali, being just over 6-inches longer than its predecessor and slightly larger in the Yukon XL extended wheelbase version, has more usable space than it has ever had. The front seats are exceptionally comfy with heating and ventilation and the proper 4-way power lumbar adjustments. Using an independent rear suspension setup for the first time makes way for more space out back, especially when power-folding the third-row’s 60/40-split bench seatbacks. The second-row, configured with the captain’s chairs, are large with heating and a single automatic climate zone (7-passenger configuration / 8-passenger is available with a second-row bench seat). 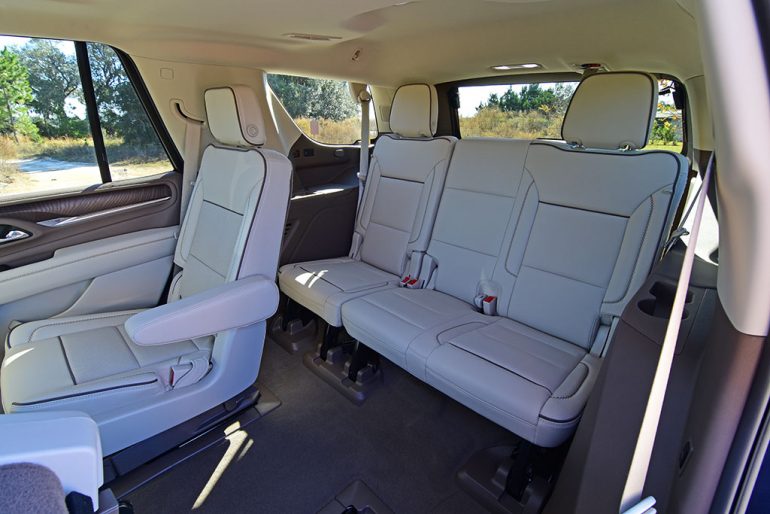 There’s a lot to like about the new 2021 Yukon Denali, and many will find those characteristics as a reason to skip shopping the Cadillac Escalade when they see the price increase for moving up the luxury ladder. Hardly any stones were left unturned with the new GMC Yukon Denali, which makes it an attractive offering at a respectable price point starting at $71,400. My fully-loaded test vehicle topped out at an as-tested price of $83,795, which is still a good value in my assessment, especially considering how much you would spend on a nicely-equipped Escalade or Lincoln Navigator. A new Ford Expedition Platinum 4×4 is going to be around $78,000 loaded, but you don’t have the availability of the trick air ride adaptive suspension of the Yukon Denali and its V8 power. A base 2021 GMC Yukon SLE 2WD starts at about $52,000. 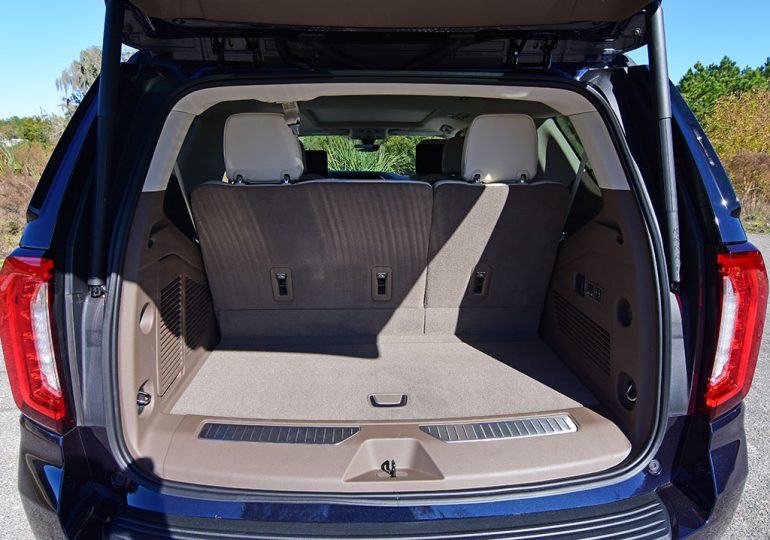 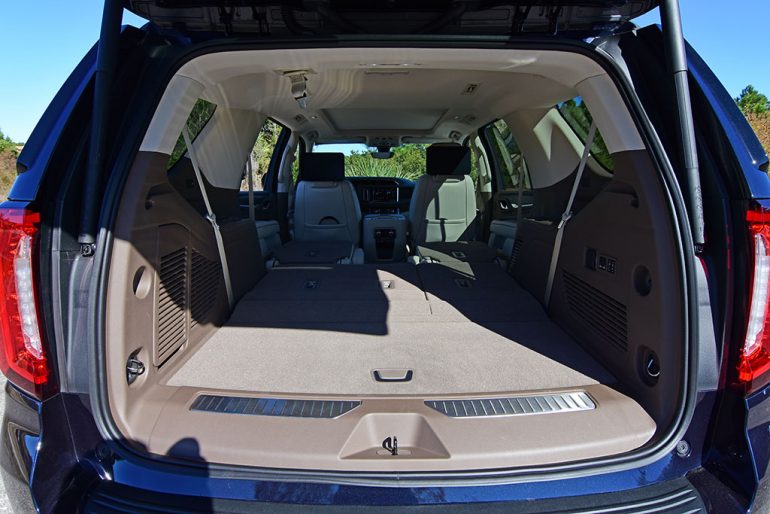 Also, one quick note for those who want some extra MPGs – look for new forthcoming GMC Yukon 6-cylinder turbo diesel (277 hp, 460 lb-ft of torque) out later this year. And for those who want a little more of an off-roading-oriented Yukon, a new AT4 trim is offered starting at $66,000.