The Nissan Kicks is one of Nissan’s better ideas of the past few years. It’s a lightweight, super-spacious and efficient crossover that’s priced to fly off lots. Nissan’s 2021 refresh addresses a few of our biggest quibbles, and it doesn’t mess up what Nissan did right before.

Of all the changes, only one looks capable of causing slight angst: the new grille. It’s big. And a little angry. Nissan is calling it the “Double V-motion” grille because it’s apparently too large for just the single, traditional V. A better name would be the U-motion grille because, well, look at it. The new grille’s reason for being? Nissan wanted to make the Kicks look more rugged and tough like an SUV. Fair enough goal, but the Kicks still looks like a tall hatchback. Besides the grille, Nissan sharpened up the headlights (LEDs are optional now), swapped to vertically-oriented side intakes and introduced a new wheel design. The taillights are connected via a new red-tinted glossy black trim piece, and the floating roof remains. It’s still a stylish and spunky car, even if it’s far less quirky than the Juke it replaced.

The best updates are found inside. Nissan took the economy car vibe one step too far when it didn’t include a proper center armrest for the Kicks in 2018 — you were stuck with a small, semi-uncomfortable fold-down armrest attached to the driver’s seat, and the passenger got nothing. That’s fixed this year with a full-size center armrest that’s usable for both front seat passengers. This, along with the change from a physical parking brake to an electronic one, forced Nissan to design a new center console that pushed the cupholders up closer to the gear lever. It’s easier to reach for a drink now, as they were shoved back next to and behind the seat belt buckles before.

Some of the interior seating and trim materials are unsurprisingly low-rent in the budget-priced Kicks, but Nissan at least improved matters for 2021. The highlight is the SR’s new three-tone seat design, but even our SV tester’s black cloth had an eye-catching pattern. Most of the door is still covered in scratchy hard plastic, but the important bits (like the door armrest) are covered in padded cloth or soft-touch plastic. The end product isn’t especially pretty, but quality and comfort are there where you need it.

Tech-hungry Kicks buyers will be happy to see the new standard infotainment system (on the base S trim) is the 7.0-inch touchscreen that runs Apple CarPlay and Android Auto. Previously, you needed to upgrade to the SV or SR trims to get those smartphone app connection capabilities. A new 8.0-inch display arrives for the new year that serves as the upgrade for the SV and SR. These trims also get a USB-C port (instead of all USB-A) and can be equipped with NissanConnect Services that gives you an in-car WiFi hotspot, among other features. The same, powerful Bose audio system with speakers in the driver headrest that we loved so much before continues to be an option, too.

A 1.6-liter four-cylinder engine is still under the hood, still powers the front wheels only and is still woefully underpowered at just 122 horsepower and 114 pound-feet of torque. That said, the Kicks’ responsive throttle and low curb weight (2,682-pound base, 2,744 pounds in SR trim) means it isn’t as bad as the specs suggest. The engine is paired to a CVT, so it’s predictably buzzy and annoying when you mat the throttle. Getting up to highway speeds will require some patience, but it’s not dangerously slow by any means. You just have to want it. It’s plenty quick for popping around town and keeping up with traffic; the revs stay low enough that it isn’t a bother. Fuel economy is the big draw with this power unit. Nissan predicts 31 mpg city, 36 mpg highway and 33 mpg combined ratings, which are identical to last year’s car. Those numbers beat out every competitor, even extra-tiny ones like the Hyundai Venue. You’ll need a hybrid like the Kia Niro to top it.

The one, big mechanical change Nissan did make for 2021 is the introduction of rear disc brakes to SV and SR grades. Nissan kept the rear drums for the base S, which means it doesn’t take advantage of the electric parking brake. Both SV and SR gain an auto hold function (keeps the car in place without holding the brake pedal down), which city dwellers will appreciate. We can’t tell much of a difference in brake pedal feel with the new disc brakes, but the drums were perfectly serviceable before anyway.

There’s no change in how the Kicks handles or comports itself on the road. It’s impressively light on its feet (thank the curb weight), but cars like the Mazda CX-3 or Kia Soul are still better handlers. The steering is rubbery and doesn’t weight up all that naturally in corners. You’re left with a car that is merely average on a winding road, but its soft tuning does pay off on rougher pavement. The Kicks’ short wheelbase is ever present on highway expansion joints and frost heaves, yet it’s never jarringly harsh. Its suspension tuning seems best fitted to rough city streets where it’s surprisingly compliant and comfy. Poor pavement is shrugged off well for such a small car, and that’s as it should be considering how most will be using their Kicks.

Those with highway commutes will enjoy the newly added adaptive cruise control that’s standard on SV and SR. While we would’ve appreciated the full Nissan ProPilot Assist system (that adds impressive lane-centering and GPS-powered auto route/speed adjustments), the Kicks’ adaptive cruise is well-tuned and dialed in for smooth operation. A number of other safety systems continue to be standard as well: auto emergency braking w/pedestrian detection, rear auto braking, blind-spot warning, rear cross traffic alert, lane departure warning (with a better steering wheel vibration warning than before) and auto high beams. The Kicks also includes front knee airbags and rear side airbags, the latter of which are rare in any car.

Backseat space and cargo room continue to be huge pluses in the Kicks’ toolbox. The rear seat is huge for such a small crossover, allowing for easy ingress and egress, along with plenty of legroom and headroom for taller folks. There’s even a pair of USB ports. Add a big hatch with a super-low load floor, and the Kicks further overshoots its footprint with surprisingly useful cargo space. 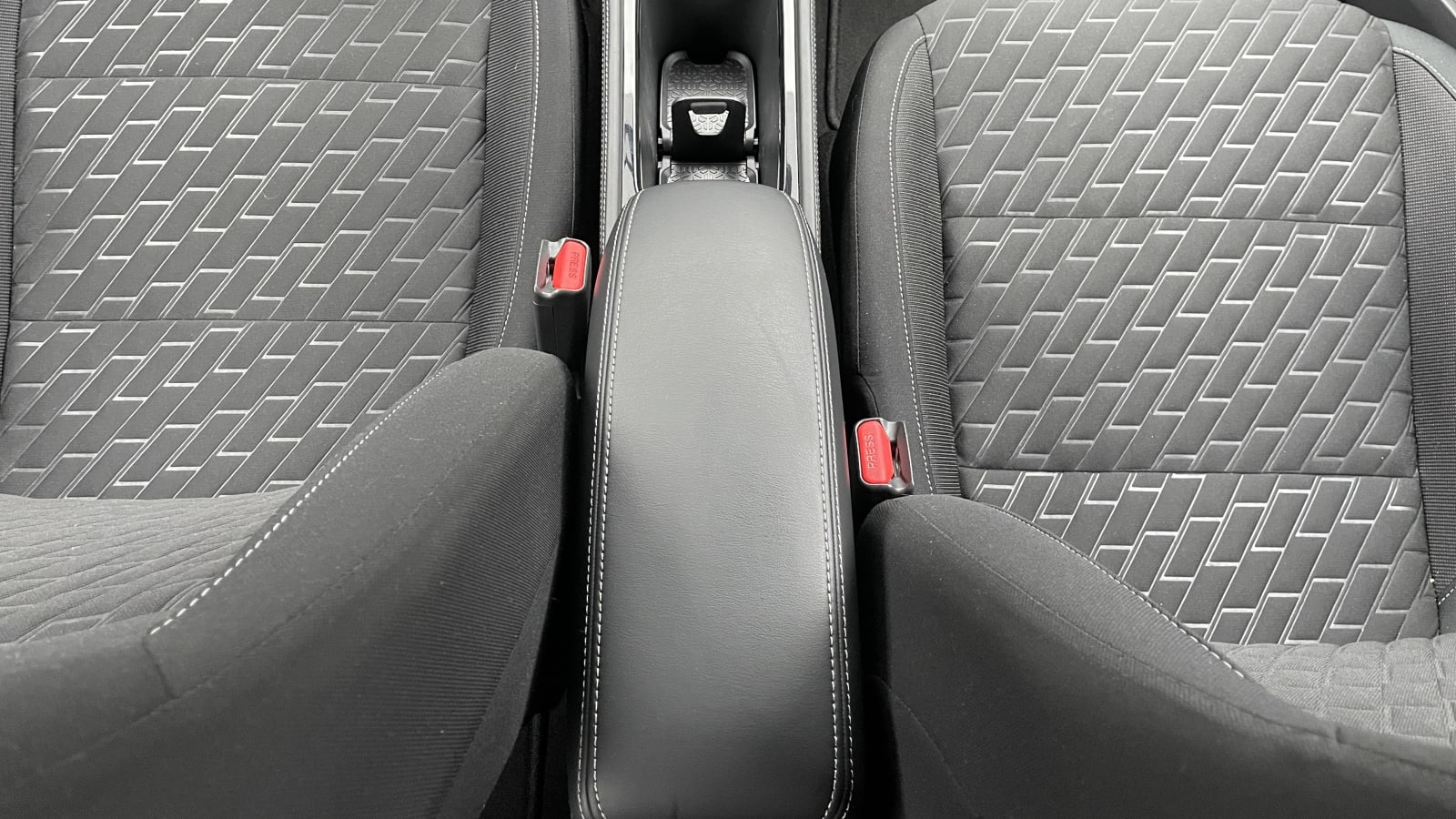 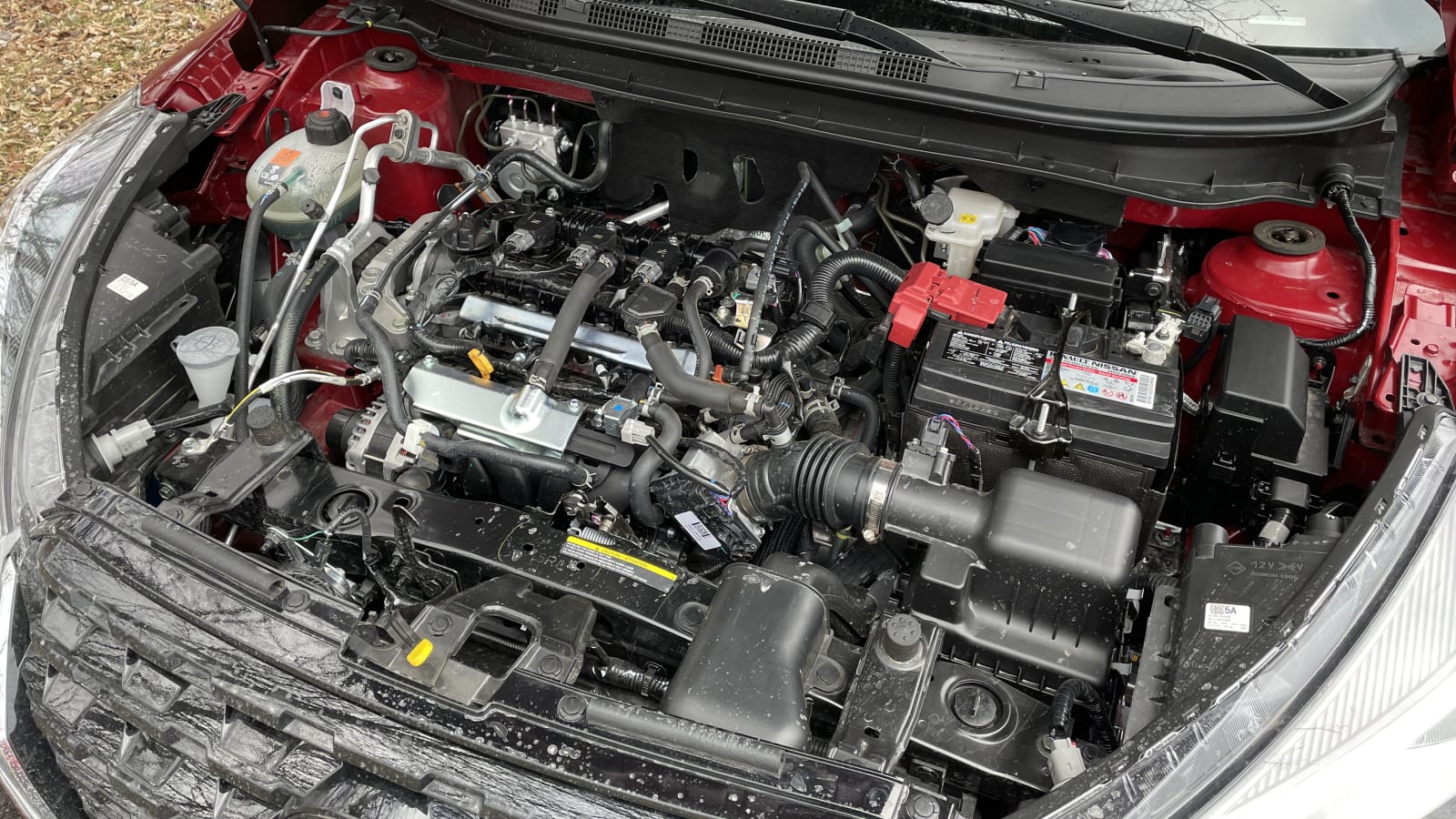 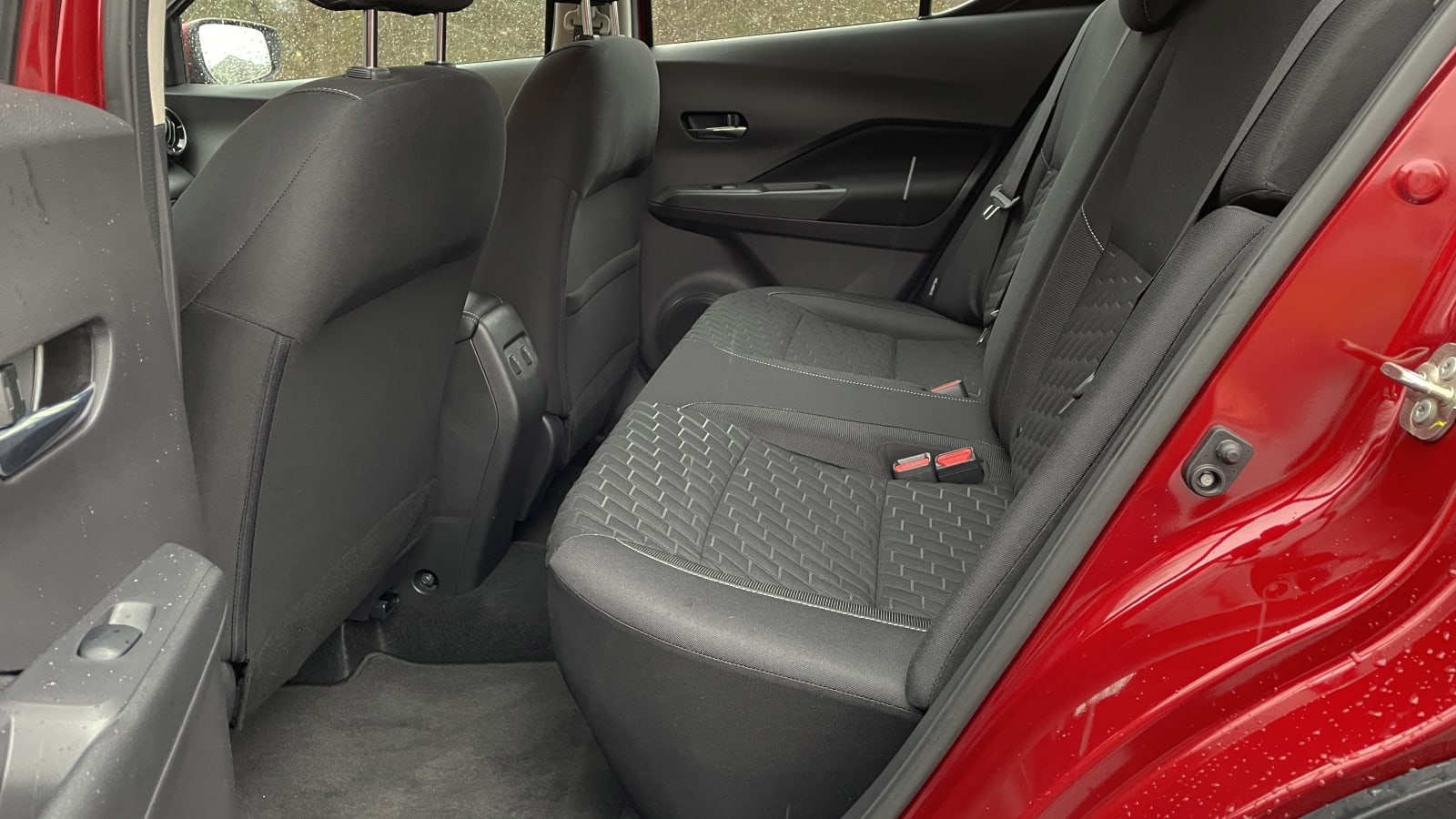 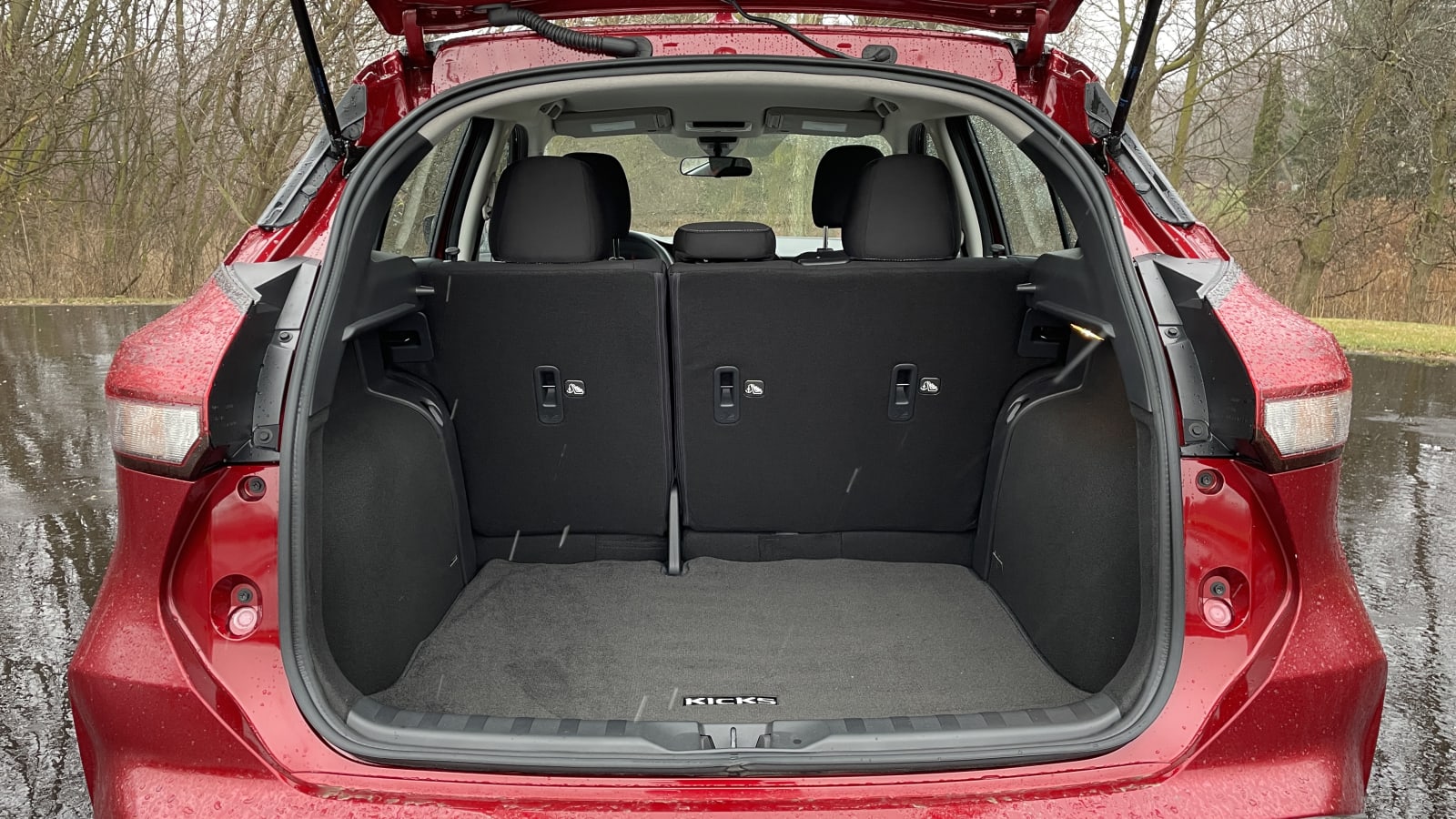 Value continues to be the No. 1 reason to pick up a Kicks. Nissan announced a base price of $20,595 for the updated model, which is just $430 more than the 2020 model. Pricing for the SV and SR trims is yet to be announced, but the SR started at a super-affordable $22,415 last year. Assuming the price increases are within reason, the Kicks will continue to be one of the best value plays in this segment.

More expensive options like the Kia Soul or Hyundai Kona are worthwhile for what you get over the Kicks (better powertrain, handling, interior quality), but Nissan is extremely competitive at the bottom end of this market. There’s also the issue of the Kicks being front-drive only. Nissan will tell you to snag a Rogue Sport if you want all-wheel drive, but the Rogue Sport is significantly more expensive. Buying some winter rubber should alleviate most (if not all) traction issues you might experience in the Kicks, though. Bottom line, the Kicks was and still is a good crossover for the money. It prioritizes the right things for someone on a tight budget, and the new features are all welcome improvements that will genuinely improve life behind the wheel.