It’s an ecological fantasy about as old as the automobile: Drive as much as you want, but spew nothing but pure H2O out the tailpipe. Though hydrogen cars can seem ideal in theory, the first-gen Toyota Mirai faced monumental hurdles when it launched in 2015. Hydrogen’s infamously skimpy refueling infrastructure was the biggest, but there was also the four-person cabin, the formidable MSRP of $58,550 and styling that made it look like the spawn of a Prius and Voltron.

The mere existence of a 2021 Toyota Mirai therefore defies the odds, but for its second generation, Toyota’s underdog eco machine has been re-imagined in virtually every way. The drivetrain migrates from front to rear-drive, enabled by a move to a downsized version of the GA-L platform found the Lexus LS sedan. The lower, wider underpinnings yield a perfect 50/50 weight distribution, improved over the first car’s 58/41 figure. The chassis also lends it a sleeker profile, with the mushed-up front and rear ends becoming replaced with a more Camry-like nose and a far more palatable tail that looks like a budget take on an Audi A7. The Mirai now seats five and a new XLE trim level shaves $9,050 from the MSRP; the Limited trim comes in at $66,000, or $7,450 over the first-gen model. As before, Toyota covers up to $15,000 of hydrogen fill-ups for three years, as well as 21 days of car rentals should you need to venture beyond your hydrogen-fueled bubble. There is also a $4,500 rebate from the state of California and a $8,000 federal tax credit that was recently re-upped as part of the recent economic stimulus bill. 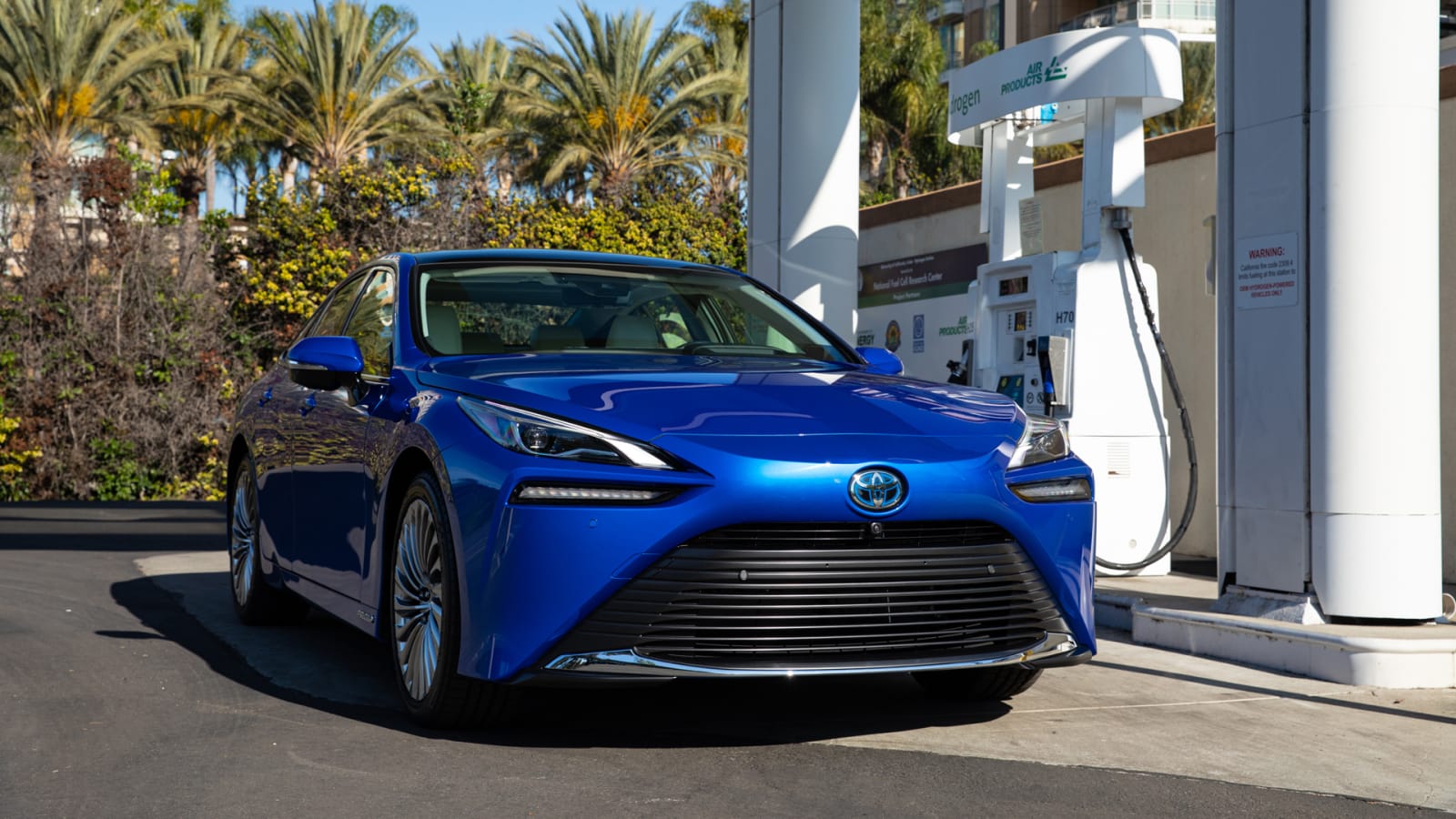 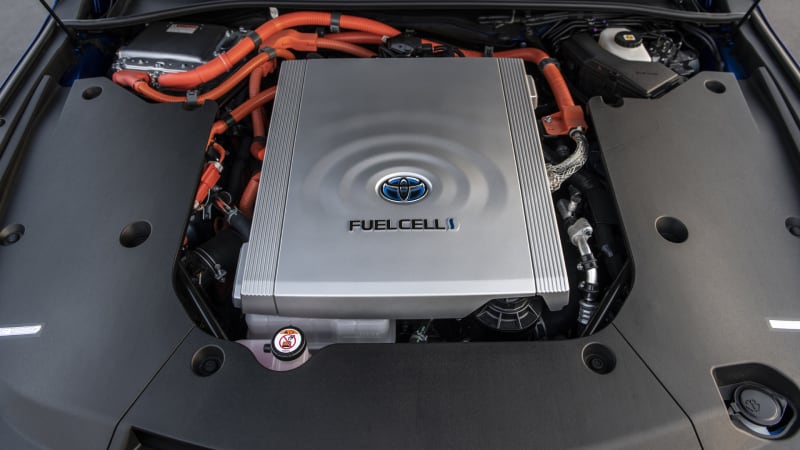 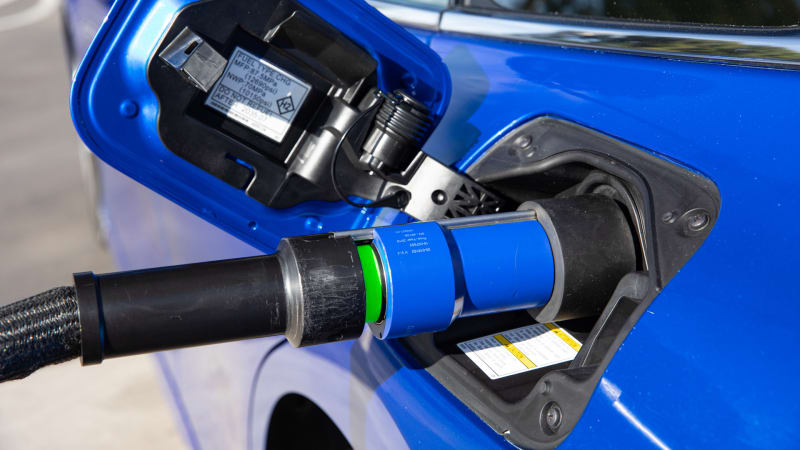 Before delving into what makes this Mirai’s powertrain new-and-improved, we should probably reacquaint you with the basics of a hydrogen fuel cell car. Rather than a gasoline engine, there’s a stack of fuel cells where hydrogen and oxygen are chemically combined to create electricity. Excess energy is stored in a battery pack. Together, the pack and fuel cells power an electric motor and produce nothing but water as a byproduct.

With Mirai 101 out of the way, improvements to the fuel cell stack for 2021 include a 50% reduction in weight and, vitally, a 20% reduction in size that allows the stack to be placed under the hood. It was under the front seats in the old car, which resulted in an oddly tall seating position. Output of the now rear-mounted electric motor improves for 2021 with 182 horsepower and 221 pound-feet, up from 151 hp and 247 lb-ft.

The battery pack also gets an upgrade, going from nickel metal-hydride to lithium-ion. Eleven pounds of hydrogen are stored in three carbon fiber tanks at 10,000 psi, and require around 5 minutes to refuel. The new Mirai offers a range of 402 miles (with XLE trim), a 30% improvement over the prior model; the Limited model claims 65 MPGe combined, or 74 MPGe for the XLE version.

Walk around the new Mirai, and you’ll see exterior styling that’s markedly easier on the eyes than the first-gen model. It still may not win your local car concours, but at least the Mirai acquires a sense of style that’s flowing and harmonious, not clunky and jarring like before. The cabin also feels sleeker and more spacious, with more smoothly contoured surfaces and the same wraparound design you’ll find in Toyota’s GR Supra. Soft touch synthetic leather abounds, and there’s a prevailing sense of Toyotaness to the whole interior, which feels solid and pleasantly appointed, with a palpable sense of conservative efficiency. All models get an 8-inch TFT cluster and a 12.3-inch multimedia touchscreen. While the screen is attractively large, the menu systems feel somewhat dated compared to some of the systems from other carmakers. 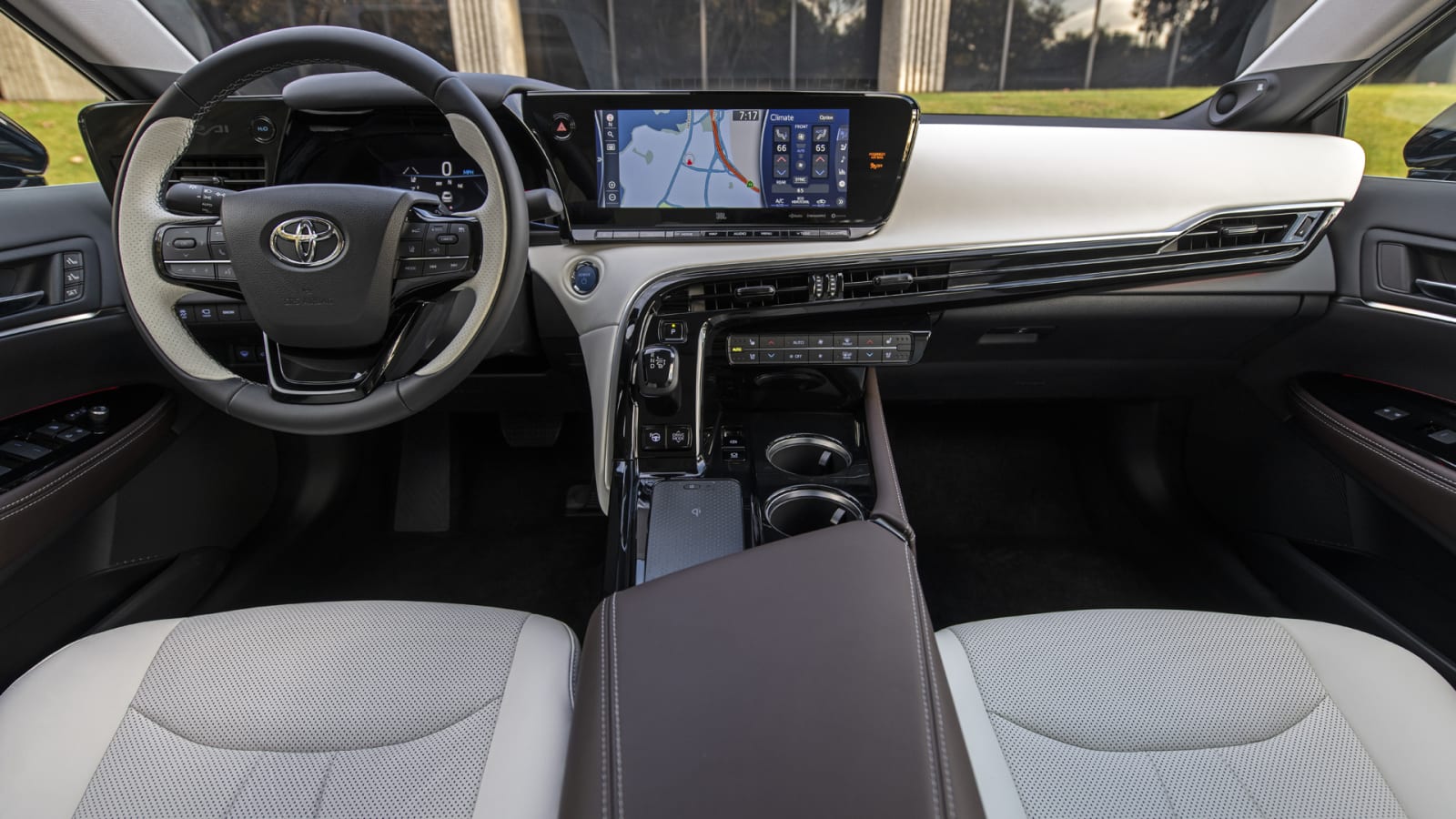 Slide behind the wheel, and Mirai feels as intuitive to drive as any EV: There’s a joystick-like shifter, a button-laden steering wheel, and two rows of straightforward HVAC buttons on the center stack. Drive modes include Eco, Normal, and Sport, and in the most aggressive setting, acceleration remains linear and smooth, offering just enough thrust for merging and most day-to-day maneuvers.

Toyota doesn’t publish 0 to 60 mph acceleration figures, but it oddly reveals the Mirai can scoot from 25 to 45 mph in 2.8 seconds. It’s fair to say the inertia from a standstill and the tapering of power at higher speeds means that particular range is the sweet spot in the Mirai’s powerband. There’s also ample cornering ability over city roads and improved handling thanks to the multilink suspension, which replaces the old strut/beam axle setup. However, the 4,255 pound curb weight can keep it from feeling completely like a thoroughbred on mountain roads like Southern California’s Ortega Highway, where we slalomed the new Mirai before returning up the heavily traveled 405 interstate. Smooth, quiet and isolated on the freeway, the Mirai proves its ultimate strengths in commute-style driving conditions. Though not exceptionally posh, it feels polished and insulated enough to make it a car you wouldn’t mind piling the miles on.

And therein lies the great irony of Toyota’s sophomore hydrogen effort: while it works well under these circumstances, those driving routes are limited by the fact that the 2021 Mirai will be first available only in California, where a mere 43 hydrogen fueling stations exist. Toyota says they’re working with local organizations to increase fueling stations, estimating 21 more in California over the next 12 to 18 months.

Toyota senior engineer Jackie Birdsall laments that while California put $400 million into building out alternative fuel infrastructure last year, only 10% of that amount went to hydrogen; the remainder went towards EV battery charging stations. Toyota also says it sold about 6,500 previous-gen Mirais in California — a rounding error for the behemoth manufacturer that spends $1 million per hour on global product R&D. However, the very fact that Toyota is so deep-pocketed answers how the Mirai is even possible: the company has the luxury of spending money to significantly improve such a niche vehicle and continue to develop hydrogen fuel cell technology.

The 2021 Toyota Mirai is a significant automotive accomplishment; having 402 miles of range, zero emissions, a civilized interior and styling that won’t frighten children make it more compelling than ever. But the bottom line persists: with so many excellent EVs and hybrids on the market, a hydrogen-powered car requires an unusual amount of commitment and a California home address close to one of those 43 stations. It’s certainly not for all, but there’s no denying the Mirai provides a novel and environmentally clean way of getting from A to B if you’re willing to take the leap.