We rigorously tested the revised 2020 Ford F-250 Super Duty back in January or, if you prefer, “the before times.” We towed a 12,000-pound trailer up a mountain in Arizona with an F-350 equipped with the new 6.7-liter PowerStroke diesel V8 and its 1,050 pound-feet of torque. We tackled some gnarly terrain off-road in the new F-250 Tremor. We also managed to get into as many variations are possible, including those with the also-new 7.3-liter gasoline V8.

Ah, but there was one version we didn’t test: a SuperCrew with the available six-passenger cabin. You know, the one with the front middle seat. So, it was with great interest when such a cabin showed up in front of my house in all its gigantic, towering glory. Of course, towing a 12,000-pound trailer in January 2020 is much easier than finding two other people to sit shoulder-to-shoulder with in December 2020, so I had to get creative. Thankfully, the cloning process was less painful than I expected. 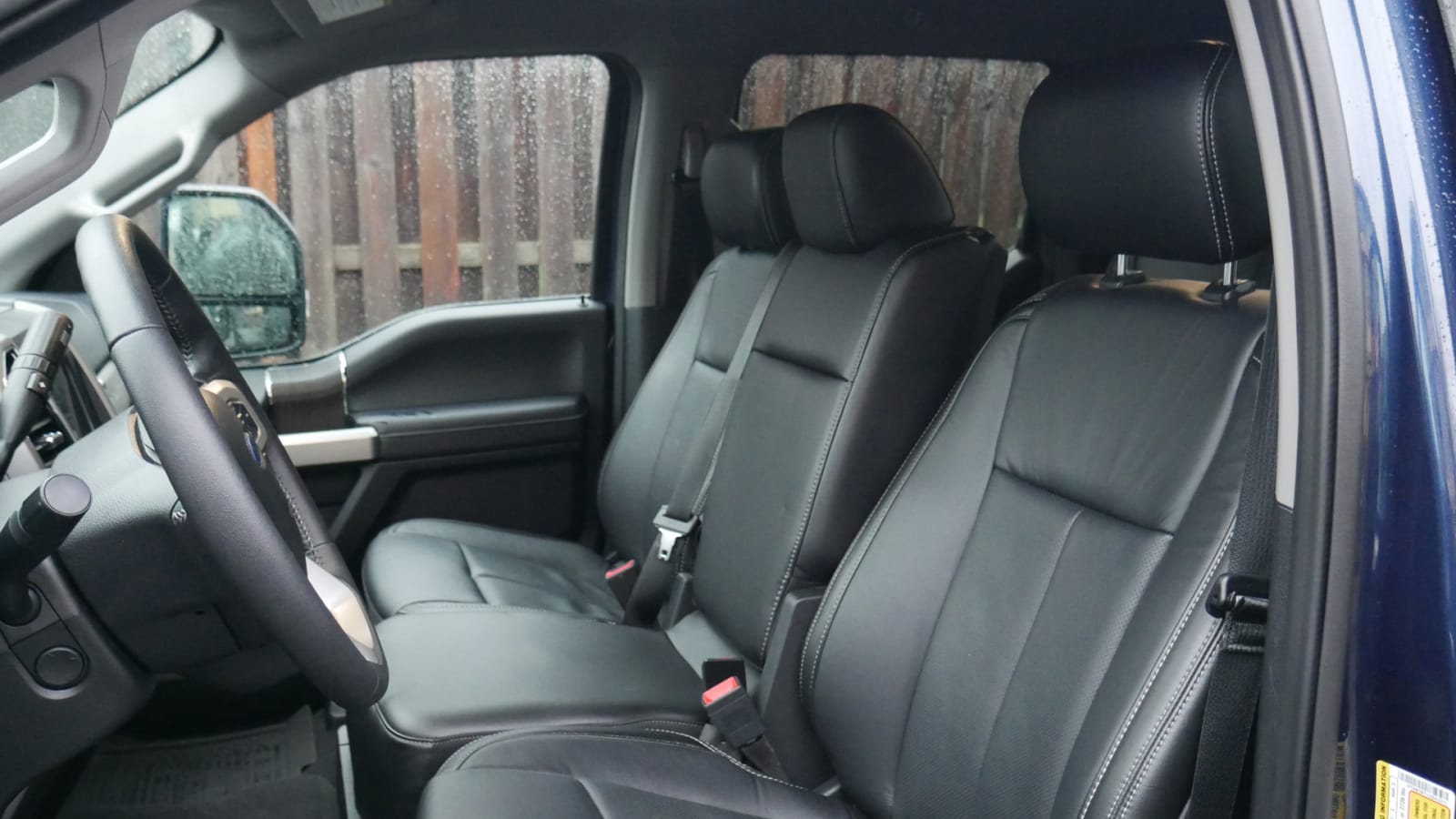 So here is the front bench seat. The middle bit is fixed rather than being locked to the passenger side in a 60/40 arrangement as was often the case in recent(ish) six-passenger cars. This means that both driver and passenger can enjoy the benefits for eight-way power adjustment and a comfy bucket seat. It also equals more shoulder room since you can at least motor the passenger seat all the way back and allow the guy in the middle to sit comfortably forward and avoid literally rubbing elbows. Being in a truck that’s nearly 7 feet wide sure helps, too.

For comparison, here’s the front bench seat of a Ram 3500. It too has a 40/20/40-split with a fixed middle, but it obviously doesn’t have the robust head restraint of the Ford Super Duty or, curiously, the Ram 1500. I checked and upper Ram 3500 trim levels have the same unit. 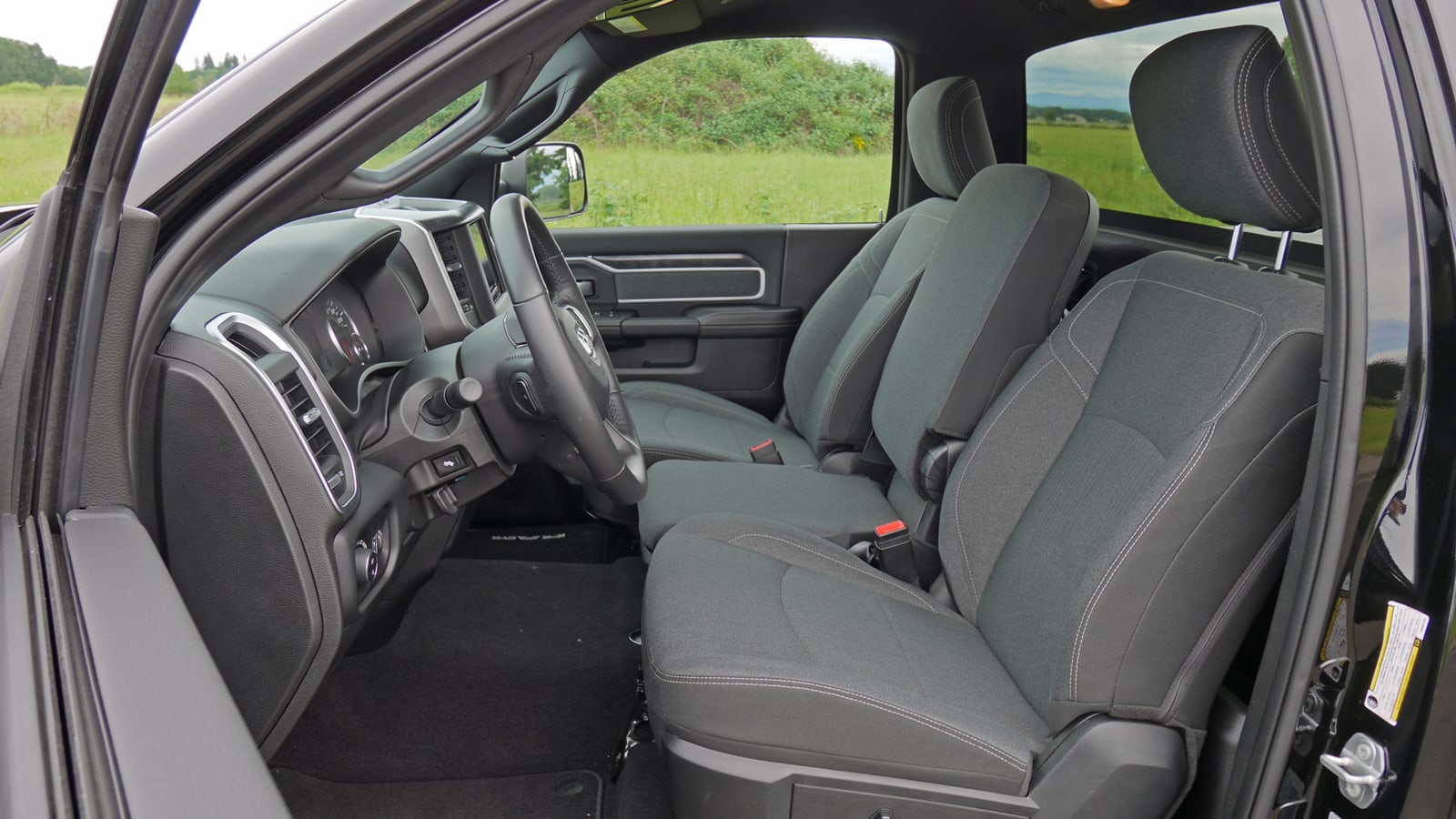 Both trucks have a storage compartment under the middle seat, though the Ford’s isn’t flat and therefore less useful. Oh well. 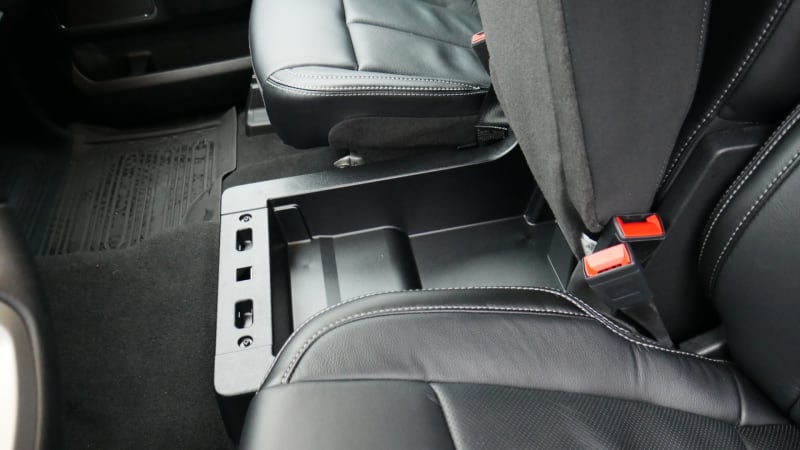 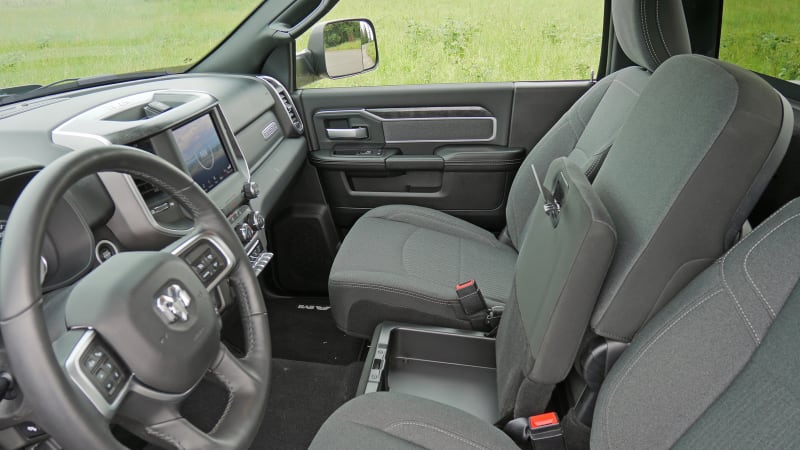 The seat backs also fold down to reveal a center console-lite with cupholders and a bin. The Ram has three cupholders with a bin cover/armrest that’s plushly padded and nicely stitched. It’s also mounted on a higher plane than the cupholders. The result is a design that looks far more finished and factory-sourced than what you get in the F-250 — and it should be noted that the Ford was a more richly appointed trim level than the rather spartan 3500 Big Horn I tested back in June 2019. 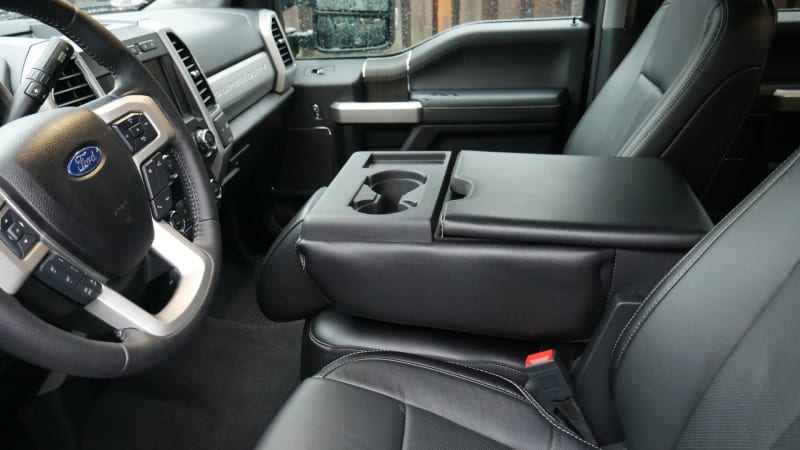 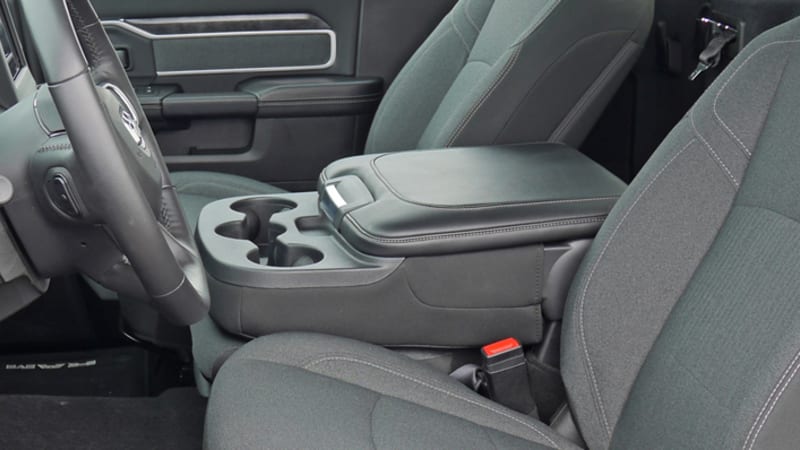 Now, I must now admit that if I sat in the 3500’s middle seat, I definitely don’t remember the experience nor did I write down any notes. As such, I can only deduce that the Ford’s middle perch is more comfortable given the seat back’s taller height and that integrated headrest. It certainly seemed comfortable enough with a properly firm and supportive cushion. It doesn’t feel like a temporary jump seat.

Space, of course, is a different issue. I’ve already touched on the comparatively generous shoulder room. There’s no issue with headroom, either, despite the elevated seat. As for legroom, the guy in the middle can drop his right leg into the right passenger footwell. You’ll definitely be rubbing legs, but hey, we’re all friends here. Or clones.

Since you can’t do the same with the driver (that pesky accelerator, you know), middle guy pretty much has to rest his leg on the hump. This is the result. 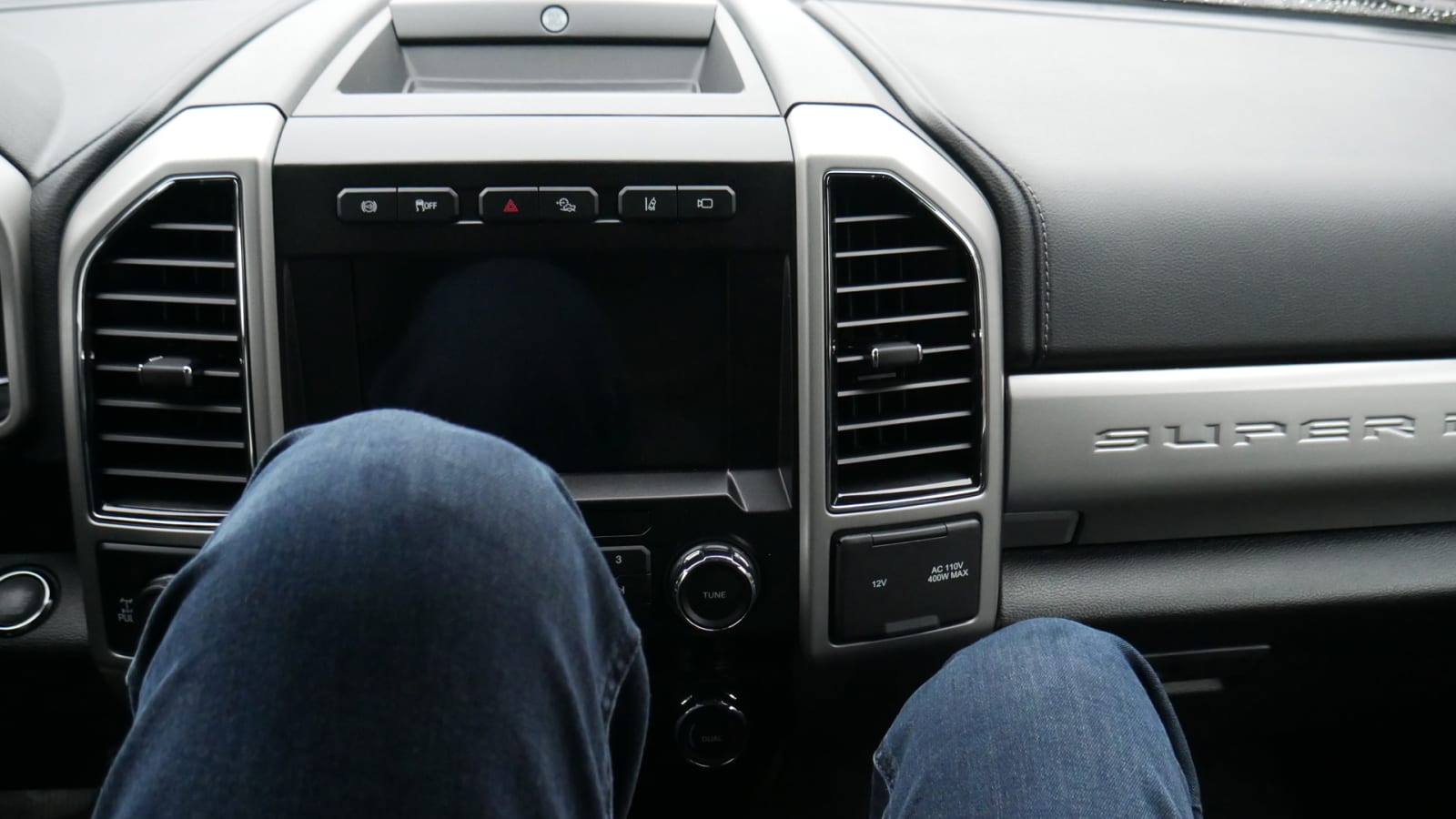 Honestly, this isn’t that bad considering I’m 6-foot-3. I was more comfortable sitting like this than in most third-row seats. And there’s certainly no comparison when it comes to available air flow. Or the view forward. Or the ability to futz with the radio or turn on the hazards or give the driver a wet willy. James No. 2 really didn’t appreciate that.

OK, let’s move on to the back seat, which is the same as what you’d find in a five-passenger SuperCrew that has a full front center console. 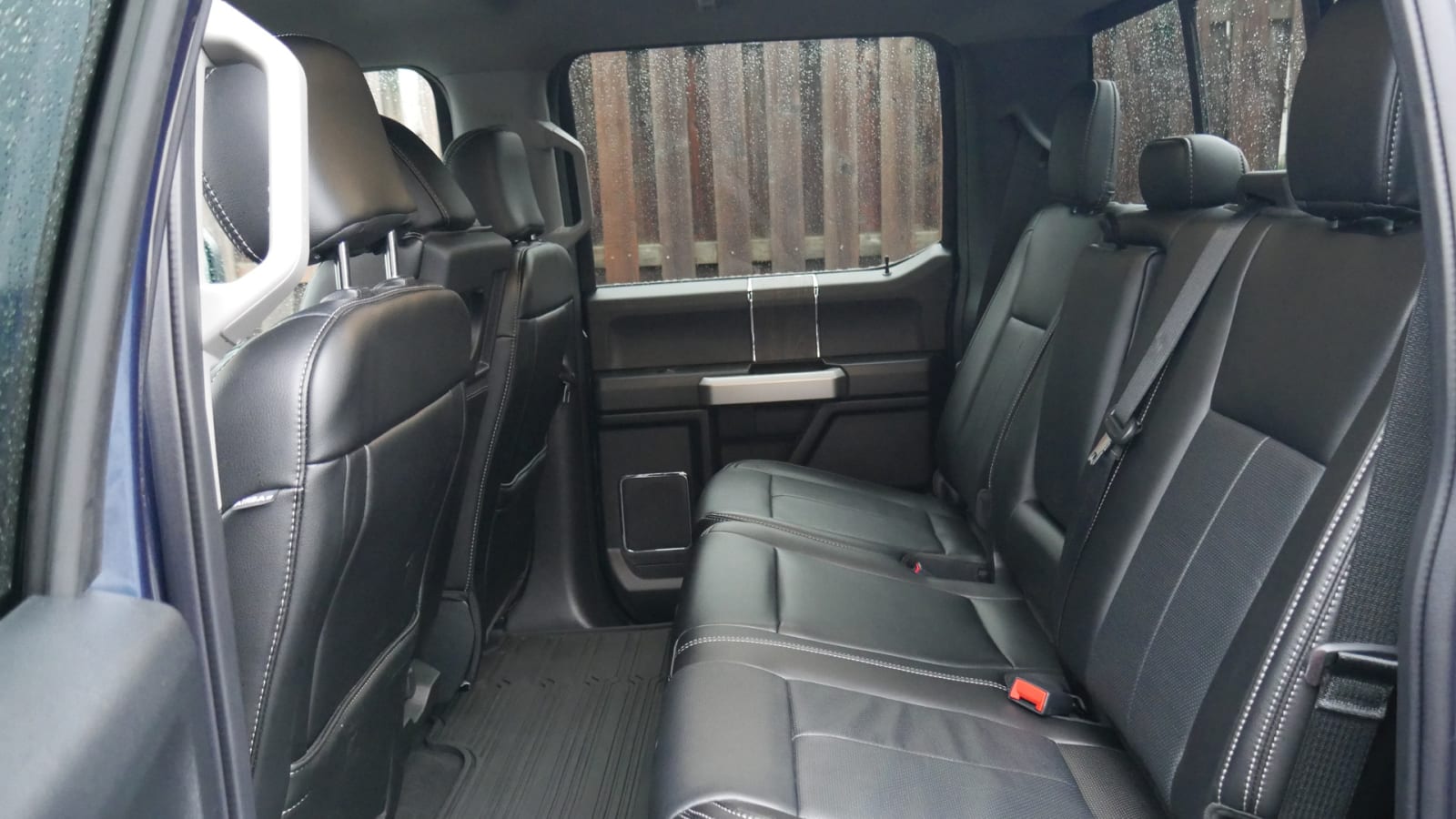 To begin, it is absolutely gigantic. The front seats are 100% rearward, yet check out all that indulgent back seat space. You’d pretty much find the same amount of legroom in the Silverado and Ram crew cabs, and every time I get into one of these, it makes me wonder if there’s a middle ground somewhere between the too-cramped extended cab (or SuperCab in Fordspeak) and the Dikembe Mutumbo-ready crew cabs. One that could save cab length and give you back some bed length in return without making the truck as long as a football field? Just a thought. Perhaps everyone would still get the jumbo size and it would be a moot point. Yeah, it’s probably a moot point. Bigger, better, carrying on. 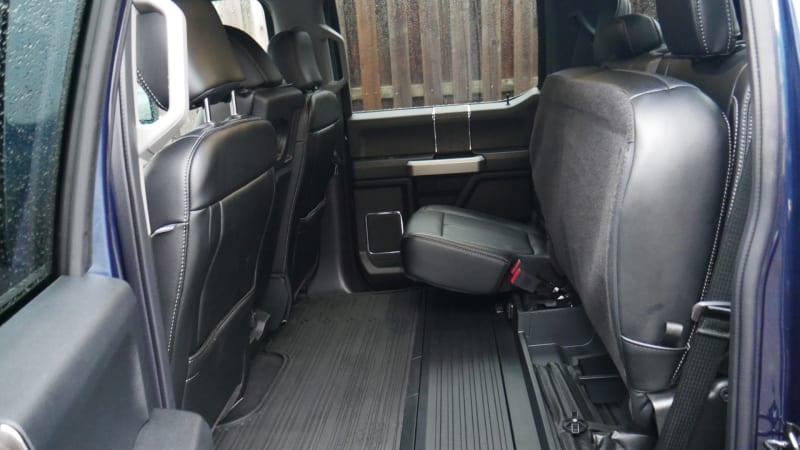 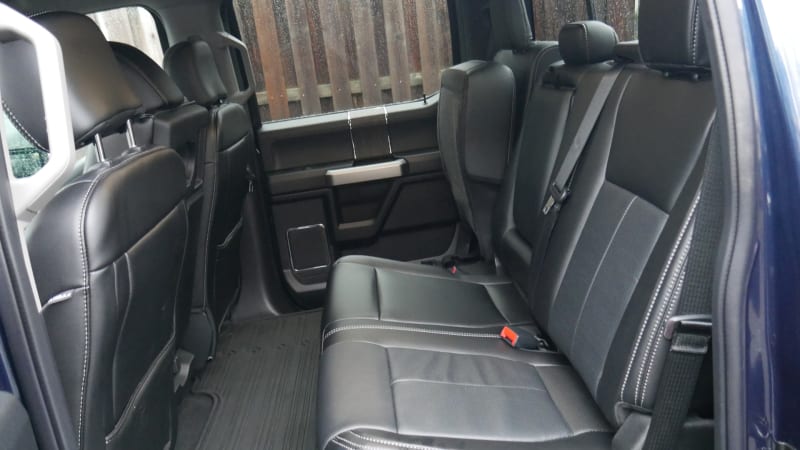 Unlike in the Ranger, the Super Duty SuperCrew has a 60/40-split seat bottom that lets you more easily carry people and luggage inside the cab. You just pull up on that little strap located on the seat bottom and up they come.

Now, check out that lined bit of plastic flooring. 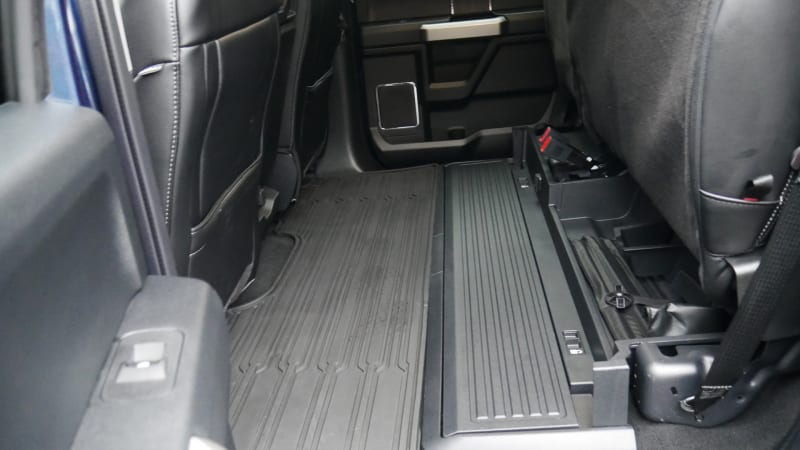 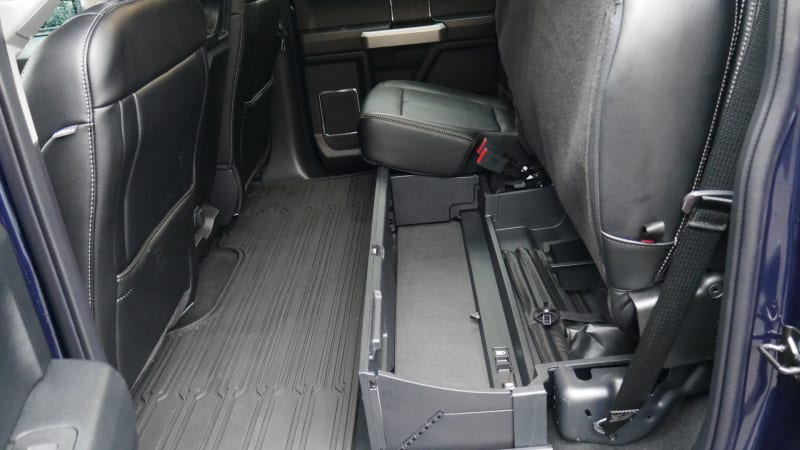 Just push a pair of tabs on each side and voila! there’s suddenly a handy bin large enough to store whatever. Probably guns. That sure looks like a place someone would store their guns.

This is a larger bin than the vaguely similar one in a Ram crew cab. It’s also more cleverly designed. 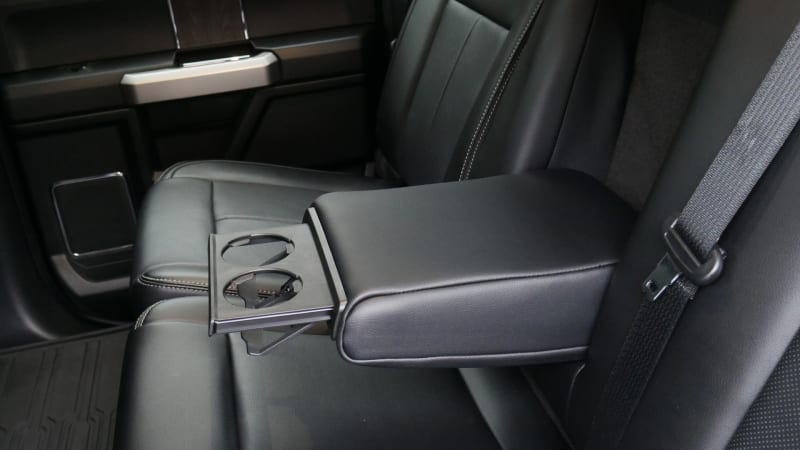 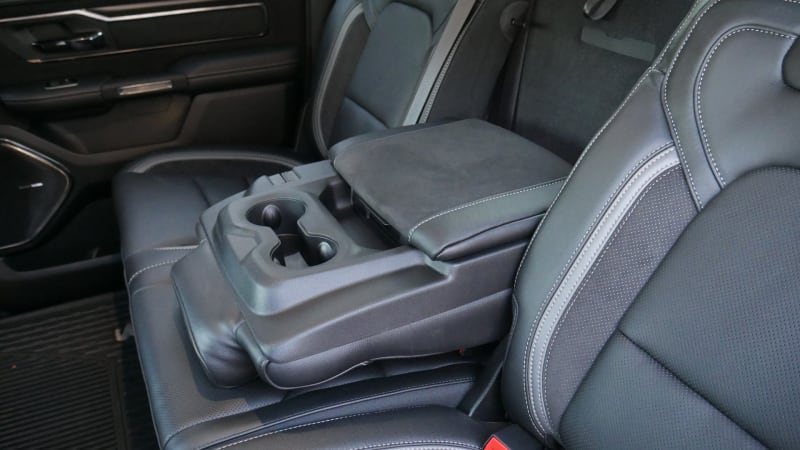 Above left is the F-250’s fold-down armrest with pop out cupholders. On the right is what you’ll find in the Ram 1500. Again, Chrysler clearly decided to pump a lot more money into its Center Console Research & Development Department than Ford did.

More notable is the fact that the Ram’s back seat can recline and the seats are more contoured. As a result, it’s more comfortable back there, but this speaks more to Ram going above-and-beyond than Ford being deficient in any way.

To that same point … 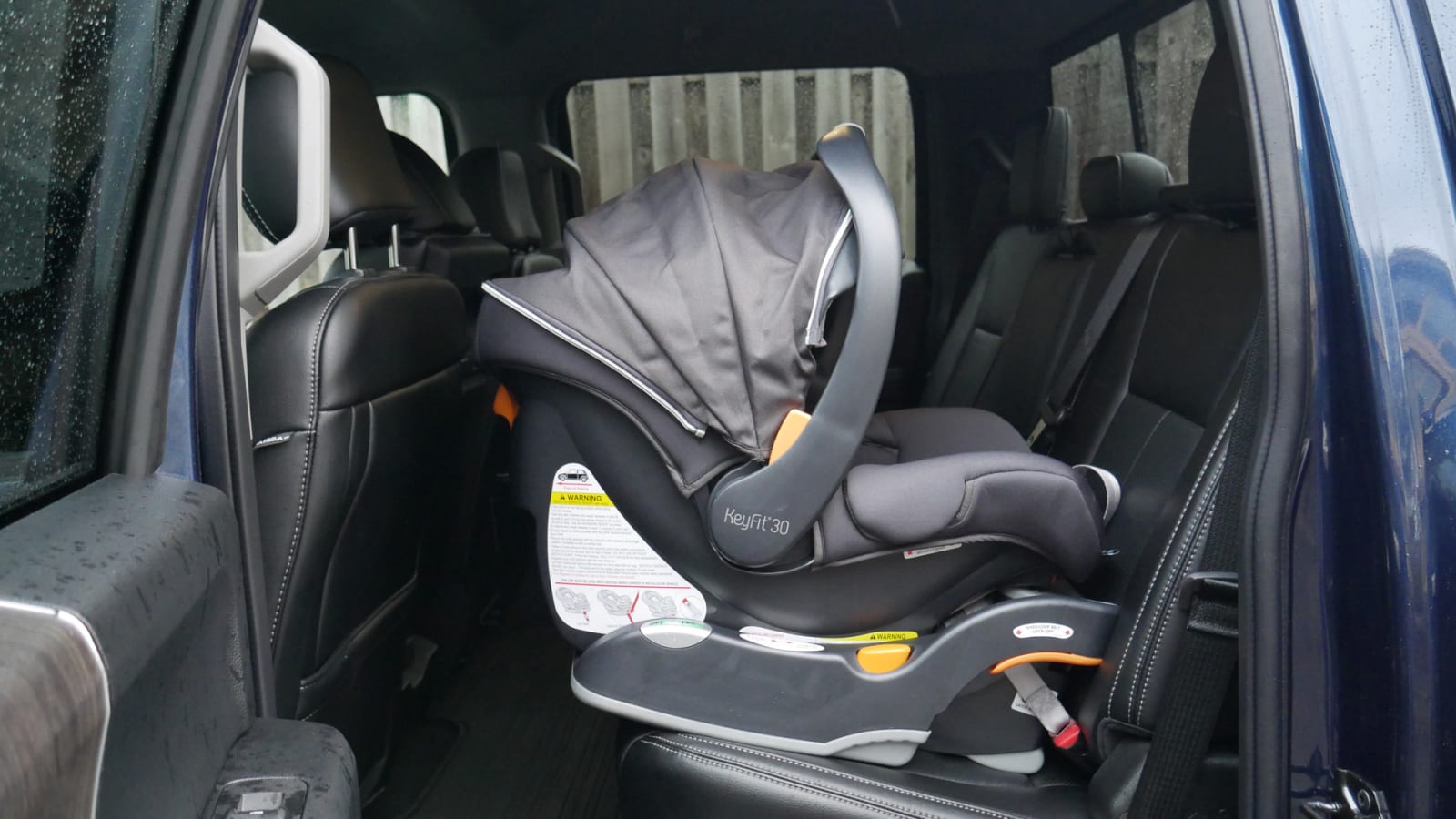 This is my Chicco KeyFit30 infant car seat plugged into the F-250. Again, the front seat is motored all the way back, further than I actually would need it to be. Yet, look at how much space is left between the KeyFit and the driver seat. For those unfamiliar with car seats, it’s immense. You’d pretty much need to get some extended-length full-size flagship luxury sedan to beat this. I’m quite confident this is better than even minivans. 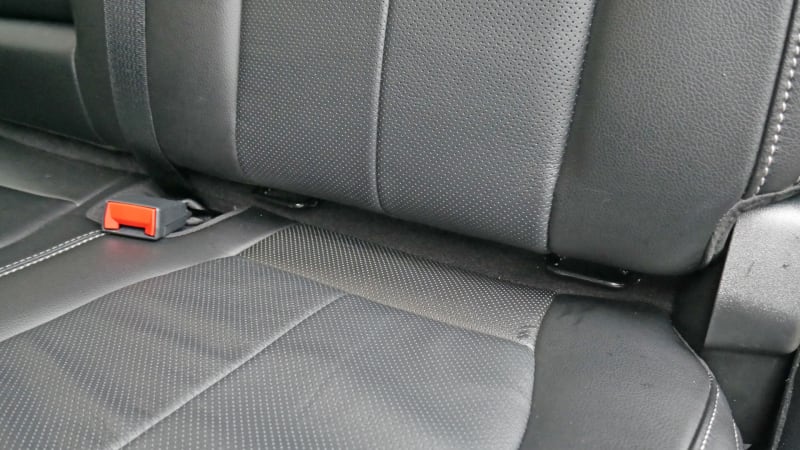 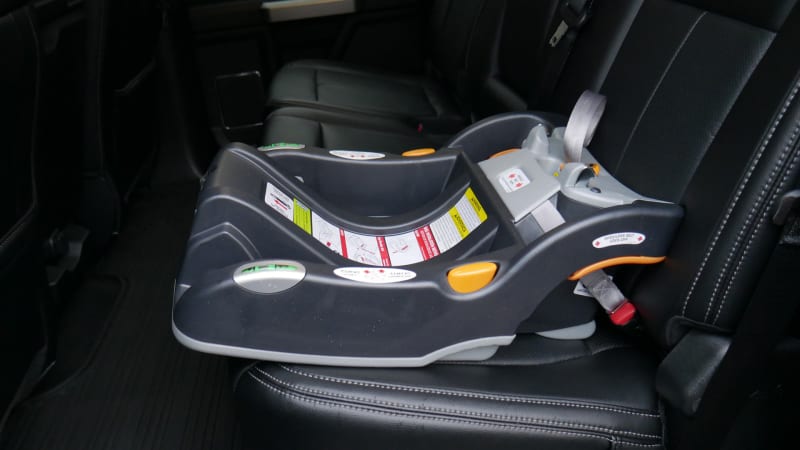 The LATCH anchors are also quite easy to access and it took only a few seconds to buckle in the car seat’s base.

Again, though, Ram goes the extra mile by providing LATCH anchors in the middle. And not the usual setup where there’s just a fifth anchor somewhere in the middle and you “borrow” one of the in-board anchors of an outboard seat. This lets you easily mount the car seat in a safer middle position, but it basically eliminates one of those outboard seats. The Ram, by contrast, is so wide that it can fit six anchors across, letting you fit two people on either side of a middle-placed car seat affixed using LATCH (as opposed to the seatbelt, which is just as safe but a royal pain to secure).

The F-250 only has anchors in the outboard position. That’s certainly not unusual, but it does mean you’d need to use the seatbelt to mount a seat in the middle. That said, the safety necessity of keeping junior in the middle is probably mitigated by plopping him in something as gargantuan as an F-250.

Speaking of which, this particular F-250 is a Tremor. It be tall. 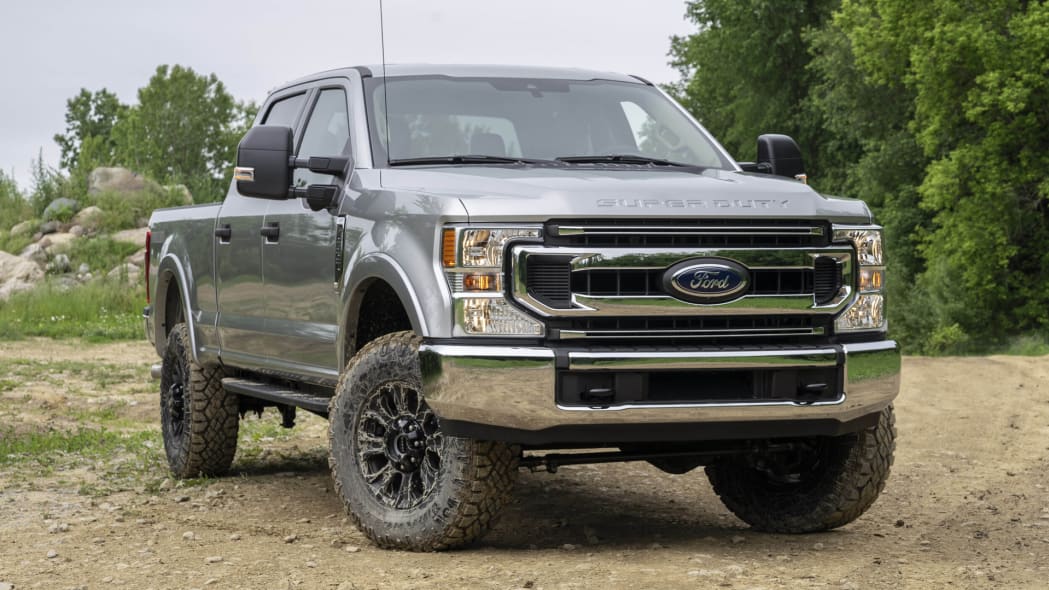 Specifically, that car seat is more than 4 feet off the ground. For some reason, I just didn’t feel like asking my 5-foot-tall wife to try and hoist that thing aboard with 18 pounds of infant inside.

So there you have it, the six-passenger Super Crew cab of the 2020 Ford Super Duty. If anything, this showed that full-size and heavy duty pickups offer a lot more than extreme towing, hauling and, in the case of the Tremor, off-road capabilities. They can also be pretty compelling family vehicles, a fact that no doubt contributes to their popularity. After all, this F-250 can carry the same amount of people as several three-row vehicles with captain’s chairs and only two third-row seats. Will those six people be as comfortable? Oh hell no, but it is possible.