The 2021 Mercedes-AMG A 35 is the cheapest new vehicle you can buy from Mercedes’ AMG division. Cheapest doesn’t mean cheap; it starts at $46,900. That price nets you one zesty small sedan that does not feel like a fake or lesser-than AMG product. The 35 series of AMGs are quickly growing in number — they started with the CLA 35 last year and have since expanded to its mechanically related GLA 35 and GLB 35 crossover cousins.

Mercedes-AMG launched the A 35 for the 2020 model year, but we never got around to driving it. Turns out, much of our review of the 2020 CLA 35 (which we did drive) could be copied-and-pasted verbatim for the A 35. The two share a ton, which is no surprise given they’re two similarly-sized four-door sedans on the same front-drive-based compact car architecture with the same powertrains.

A 2.0-liter turbocharged four-cylinder shoves 302 horsepower and 295 pound-feet of torque through a seven-speed dual-clutch automatic gearbox. It’s not the hand-built firecracker under the hood of the CLA 45 that’s capable of 382 horsepower, but 302 is still a respectable figure. Also note: there is no higher-performance A 45 version available in the U.S. — it’s A 220 and A 35 only.

An AMG Performance all-wheel-drive system distributes power to all four wheels, sending a maximum of 50% power rearward. There’s no trick rear differential varying the torque across the rear axle as in the CLA 45. Like other AMG products, this one has launch control and it helps rocket the little sedan from 0-60 mph in a short 4.6 seconds. That’s identical to the M235i Gran Coupe and a touch quicker than the Cadillac CT4-V. 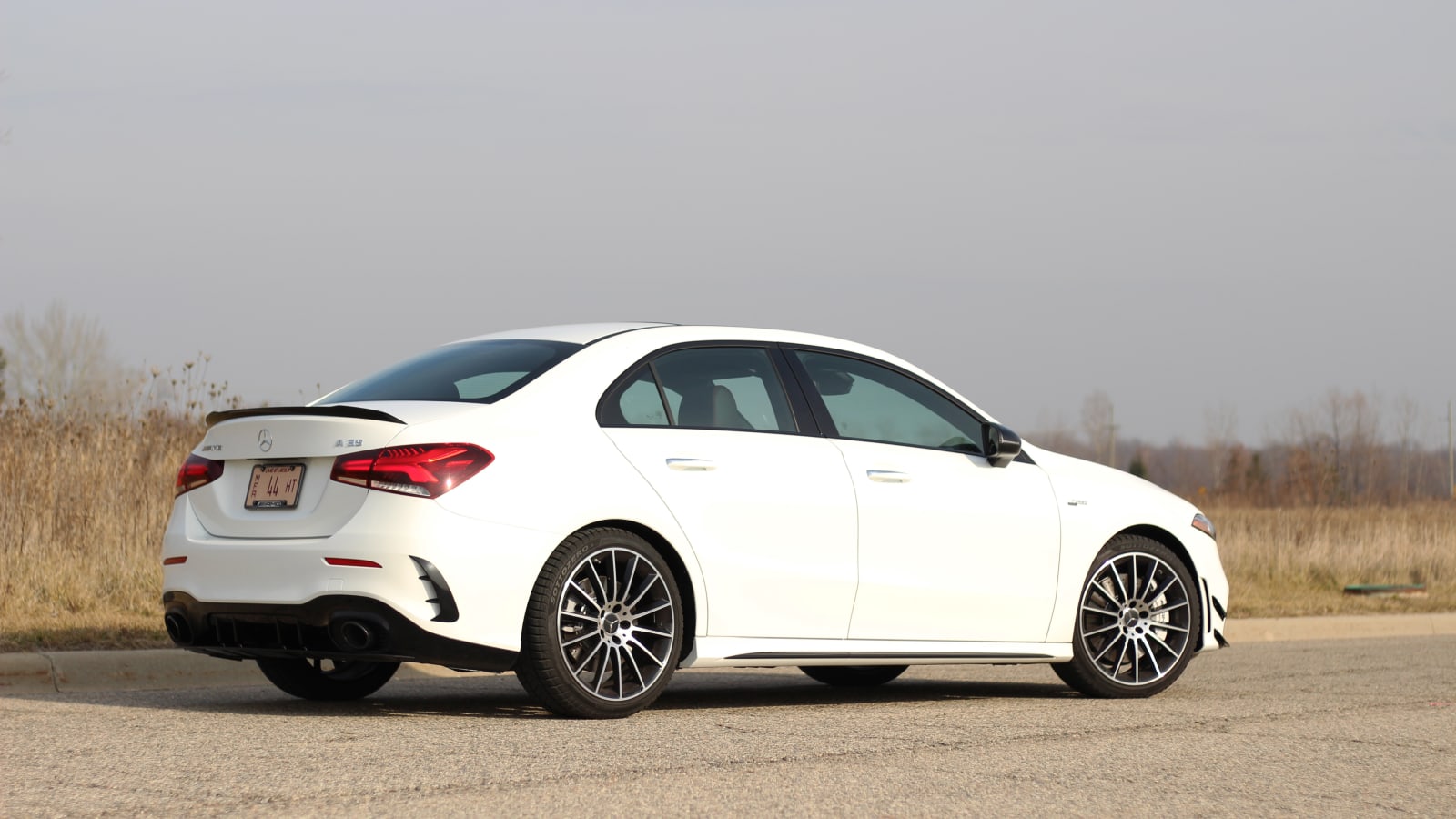 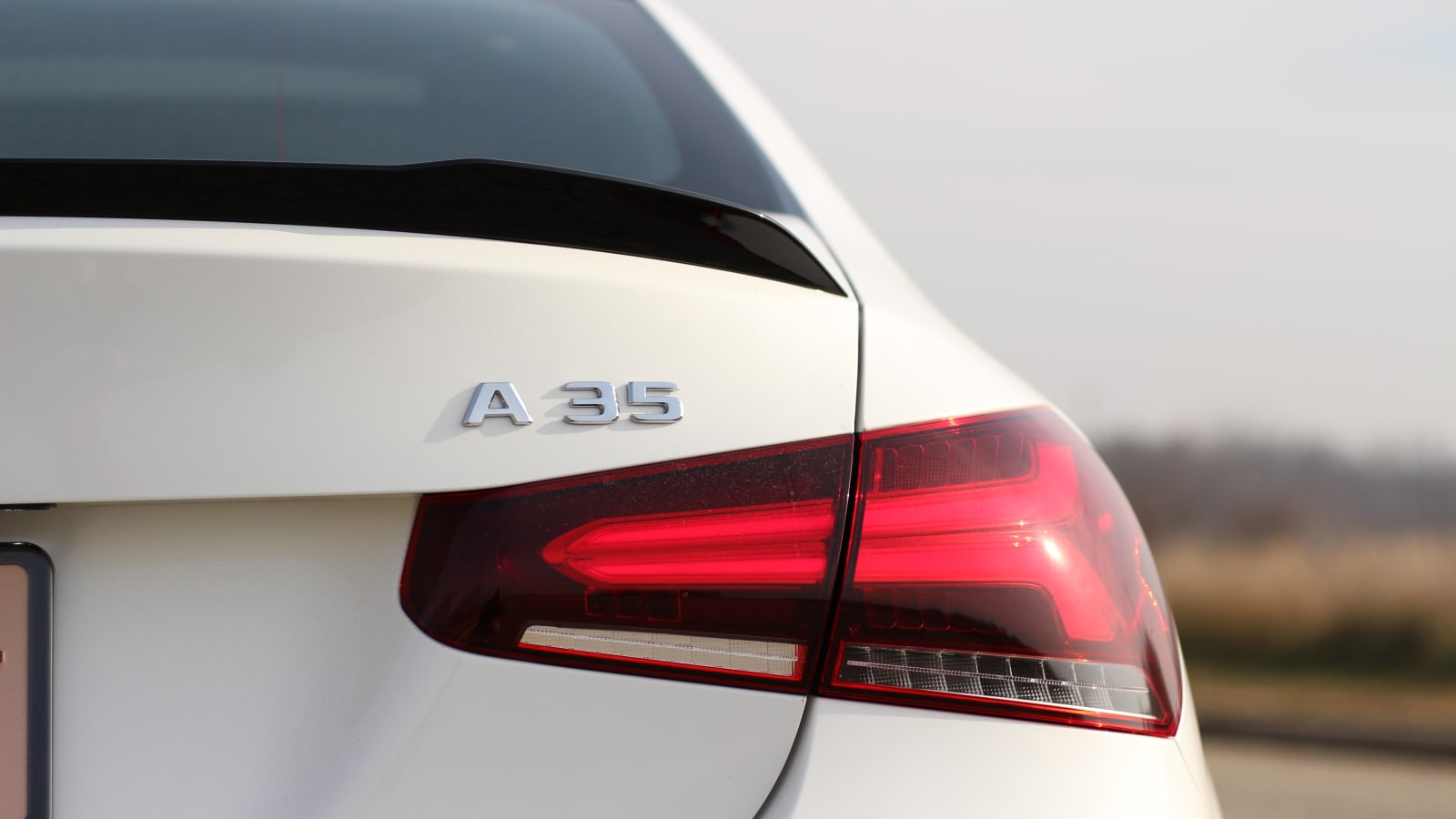 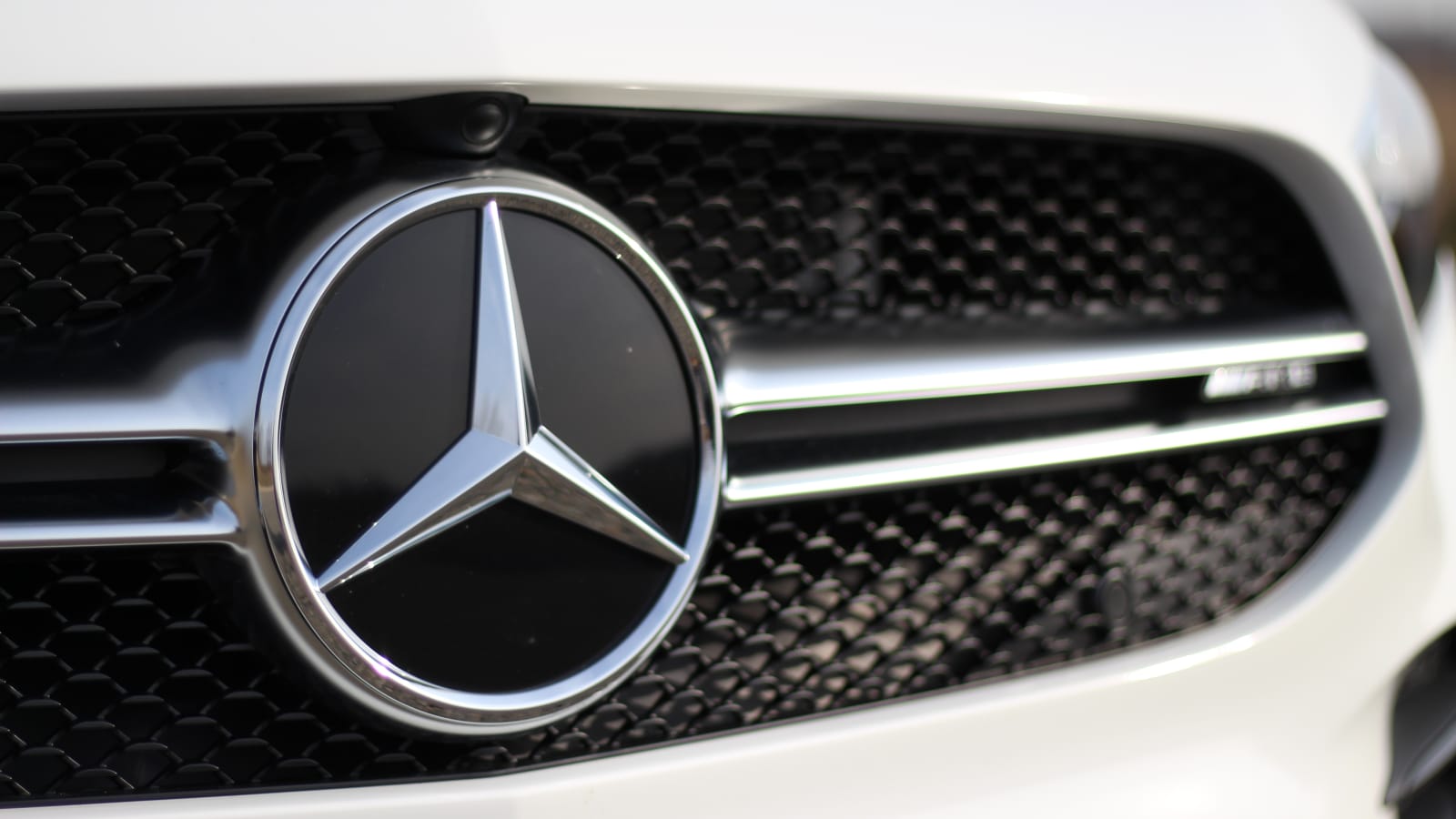 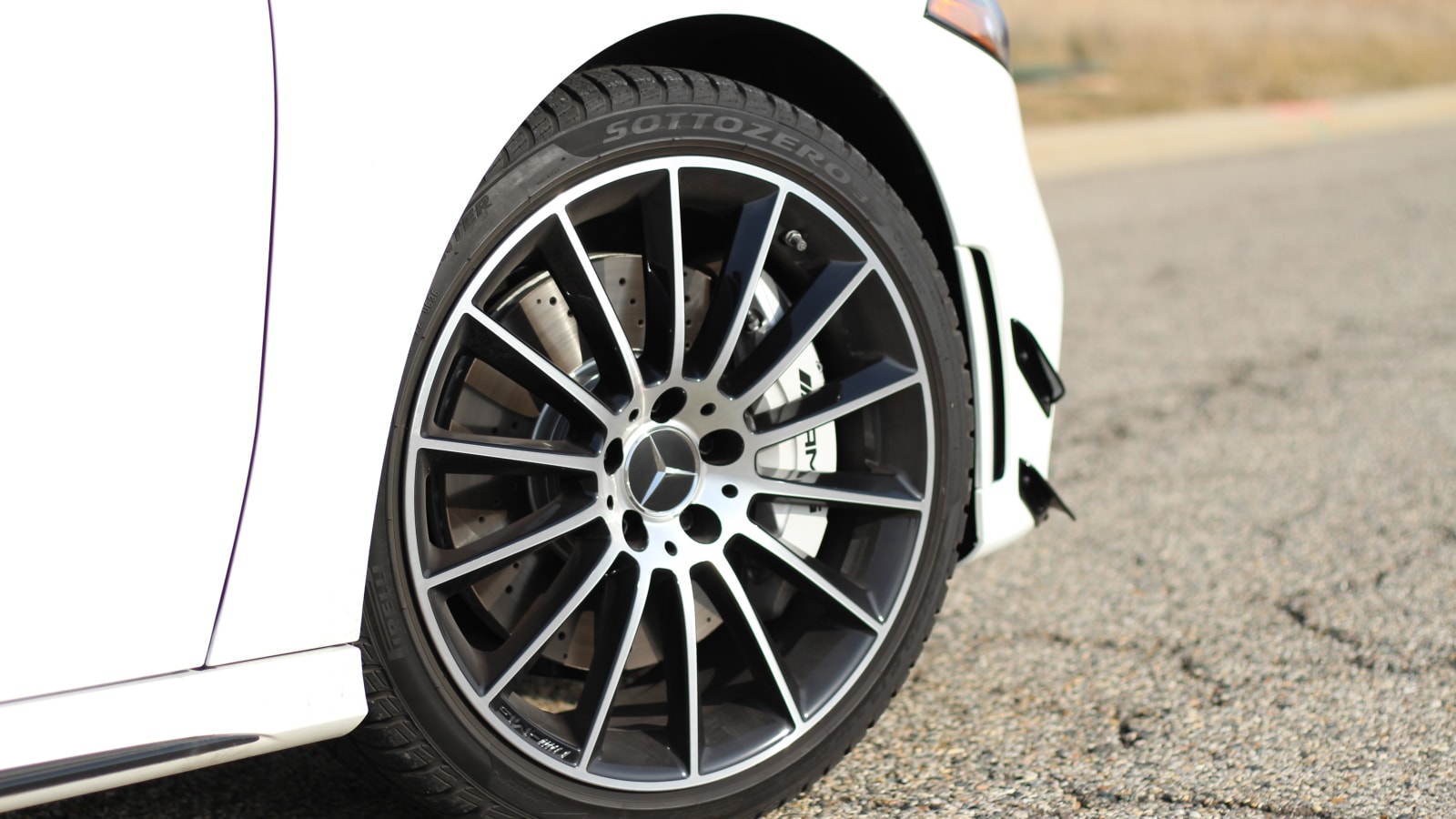 This car’s biggest differentiator to the CLA 35 is its design. Where the CLA is a droopy and long coupe-like fellow, the A 35 appears short, stubby and tight. The A 35’s rearmost pillar is more upright and leads into a shorter, flatter rear deck than the CLA, giving it the appearance of a compact car — it’s a good approach. The CLA’s 5.3 inches of additional length (both share a 107.4-inch wheelbase) moves it into C-Class territory for overall size. Mercedes uses the CLA’s extra space to give it a larger trunk than the A-Class, coming in at 11.6 cubic-feet versus the 8.6 cubes in the A (it’s more usable than that paltry 8.6 would suggest). They have identical (and limited) rear seat utility, but the A 35 takes a win for taller folks due to a less head-infringing roofline (by about 2 inches).

Similar to the CLA 35’s driving manners, you must be willing to commit to an always-on type of personality with the A 35.

This engine is a game of give and take. Peak torque hits at 3,000 rpm, and there’s always a noticeably long bout of lag between foot down and forward thrust when taking off from a stop. It’s anemic enough off boost and potent enough on that driving smoothly takes more concentration and effort than most boosted four-cylinder engines require. Get too greedy on the throttle waiting for the sensation of torque to come, and you’re gifted more than you wanted in the first place.

On the flip side, this engine is characterful and entertaining to play with versus other turbocharged four-cylinder efforts. There’s a real sense of drama to the wait, wait … boom, way it comes into boost. Using launch control all but eliminates any waiting for acceleration, and it’s plenty fun, but it’s not how you’re going to be taking off from most traffic lights.

The A 35’s transmission and the noises it makes will bring enthusiasts delight. Its snappy, quick and smart seven-speed dual-clutch transmission has super close gearing at low speeds for better around-town acceleration. You’re in third gear before you even hit 60 mph. It automatically downshifts into corners and holds gears when it should, but big, nice to touch paddles and near-instant response from tapping them encourages frequent manual gearchanges.

Plus, each upshift is capped with an emphatic pop, and every downshift returns a few bangs and crackles in Sport Plus mode. This car’s variable exhaust brought smiles and laughs all week long. You can tone it down and eliminate all the theatrics by swapping to a less aggressive mode if the noise isn’t your style. We prefer making noise, which, while not as scintillating as with the CLA 45, is still rather good for the engine.

Unfortunately, Mercedes-AMG has turned a knob too far with the A 35’s suspension tuning. Our tester had the $990 AMG Ride Control Sport Suspension, and there’s a bit too much sport (read: teeth-clenching stiffness) in it for normal roads. The standard suspension is fixed, but this optional AMG suspension is adaptive. The system will automatically adjust damping at all times, but there are three preset ranges you can put it in: Comfort, Sport and Sport Plus. Comfort is more than capable of doing the job on a twisting road, and while Sport Plus does tidy up body movements by a smidgen, its ride stiffness feels more appropriate for a racetrack than a road.

This chassis truly does shine when you want to drive quickly, though. It’s reinforced versus a standard A 220, adding an additional aluminum plate underneath the engine and two diagonal braces at the front of the underbody to increase rigidity and stiffness. The front end turns in quickly and eagerly, hiding its 3,461-pound curb weight well. Sport Plus mode weights up the steering to our satisfaction, and the variable ratio rack means it’s quick to react when driven fast. It’s like a Golf R in the way it attacks the road: small, tossable, sophisticated. And there’s no action from the rear whatsoever. The CLA 45 and its trick torque vectoring rear differential will wag its tail like a rear-drive car as it shoots around turns, but there is no such fun hiding in the A 35 and its more pedestrian all-wheel-drive system. That’s fine for technical grip, less so for pure fun. Mercedes will brake the inside rear wheel in corners to aid turn-in, but that’s it for neat handling tricks. The four-piston front calipers and single piston rears tug the car down from speed quickly and assuredly with great pedal feel. 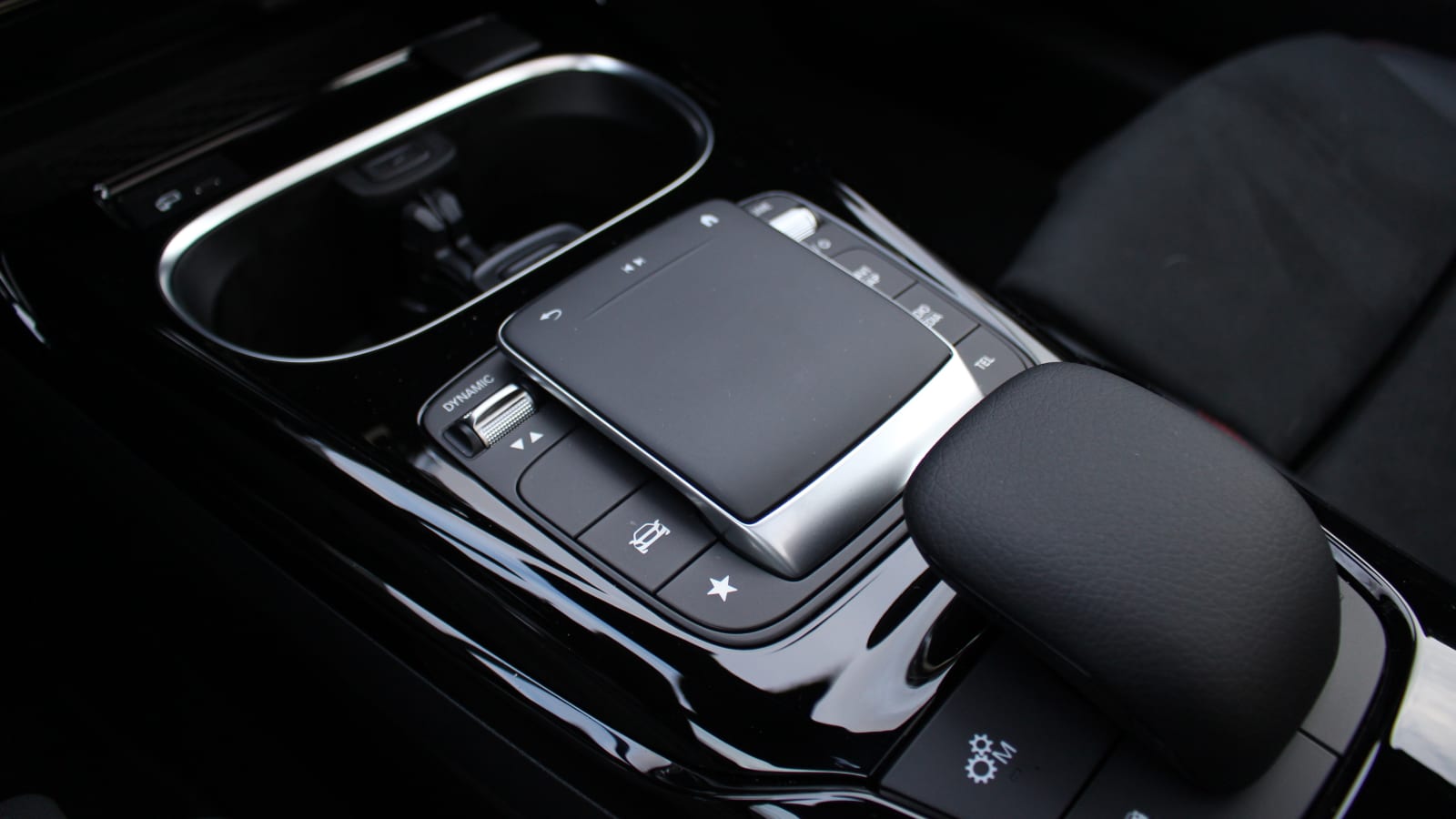 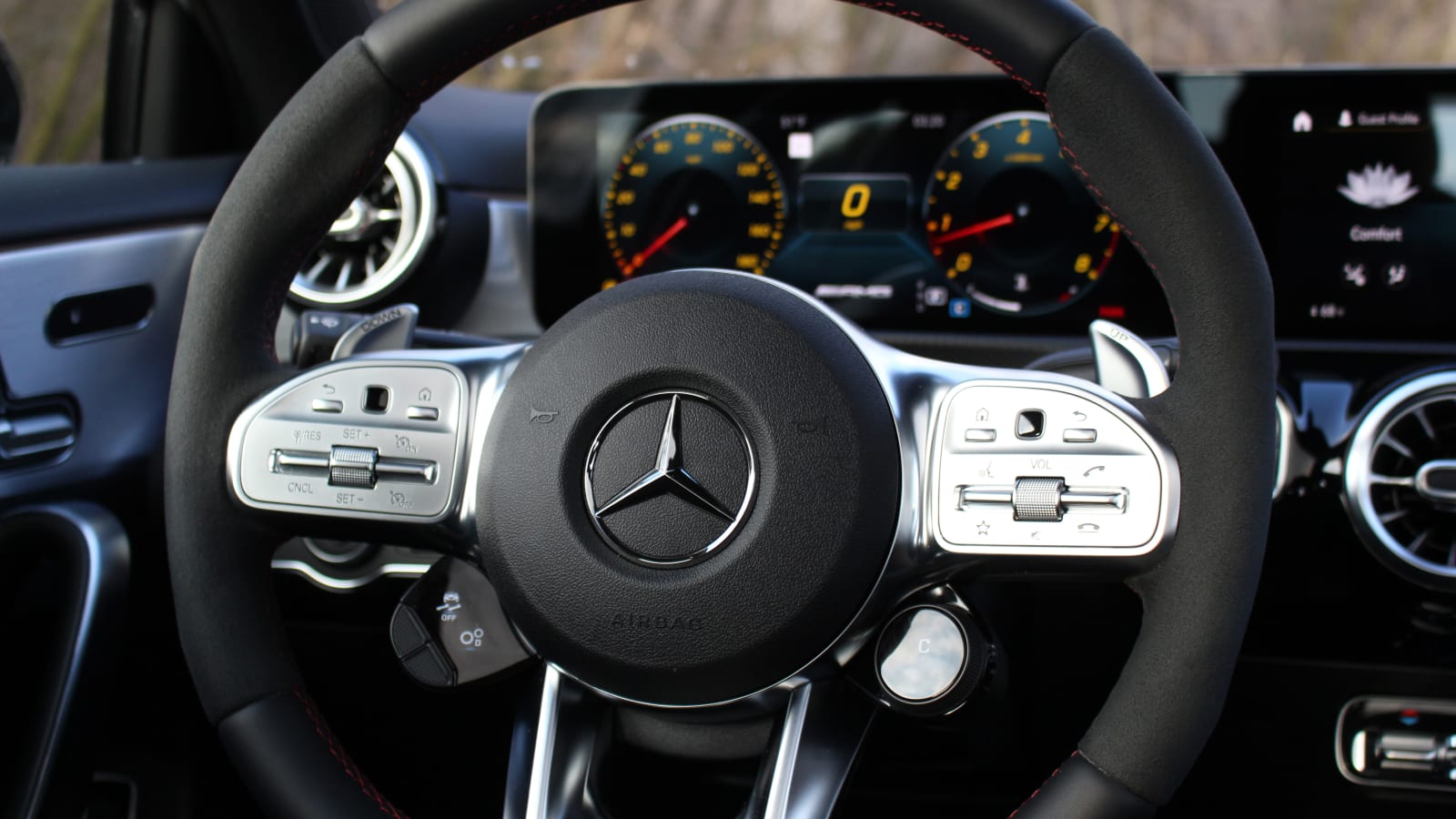 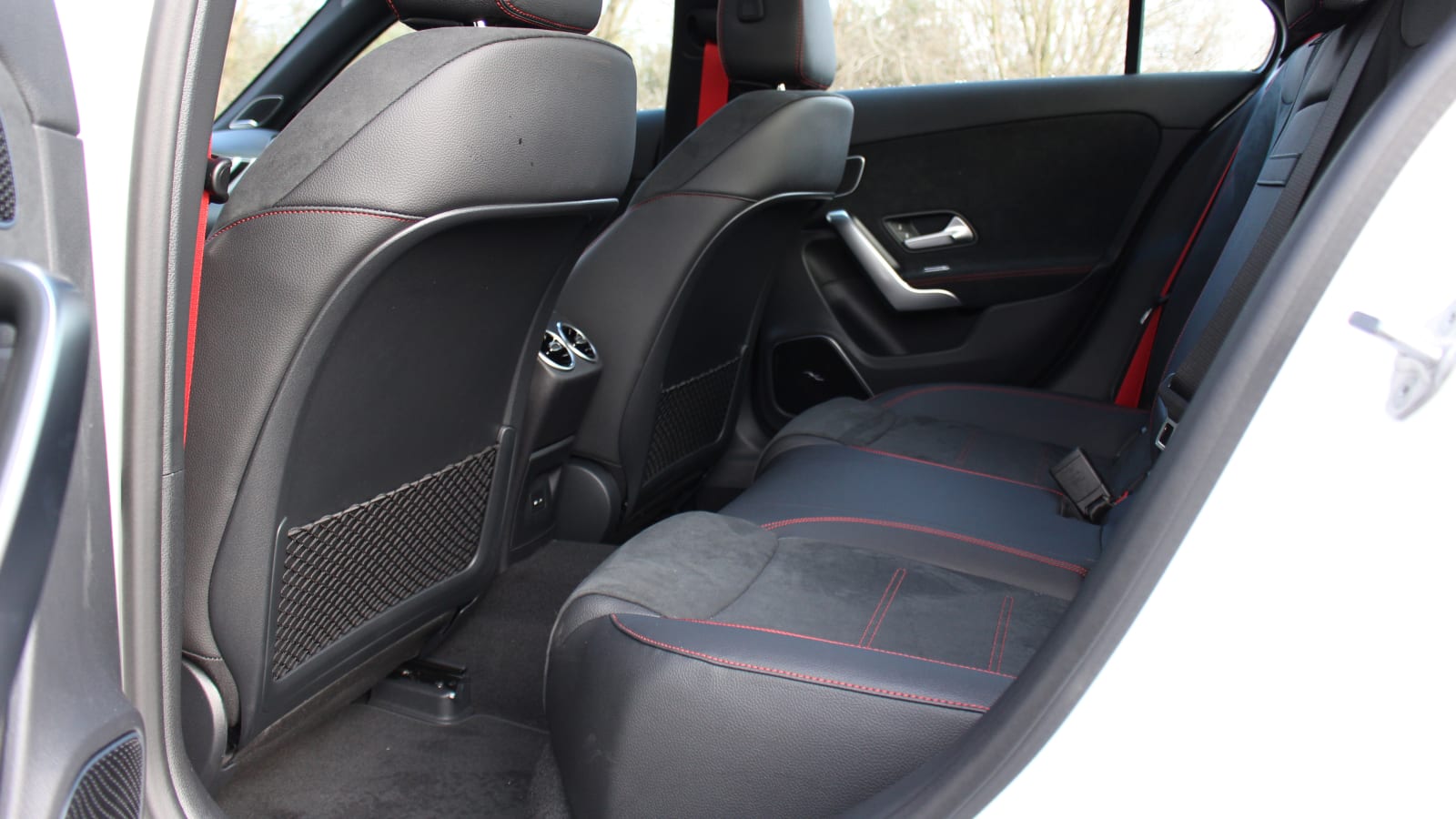 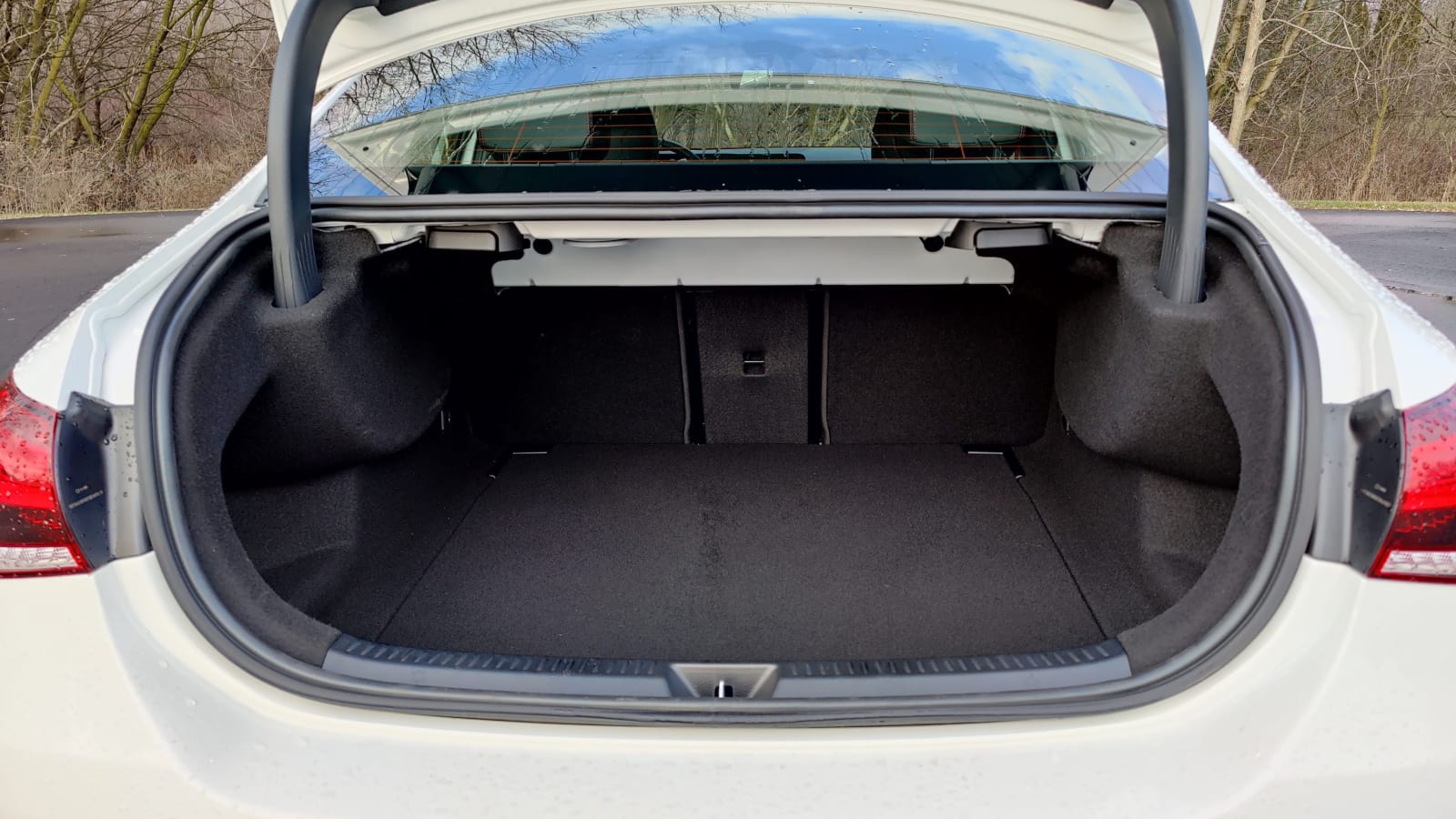 Once the good pavement ends, the bracing for impact begins. We might be more forgiving of this harsh ride in an AMG 45 series vehicle, but it’s just not suited to a car that’ll most likely be someone’s mildly spicy daily driver. West Coast Editor James Riswick found a similar issue with the CLA 35, and he drove that on pristine Arizona highways. There’s a better ride and handling balance that can be struck here.

The rest of the A-Class — interior quality, tech, styling — is up to Mercedes’ current high standards of excellence. Sufficient bolstering is provided on the A 35’s seats for all your cornering shenanigans. Visibility is appropriate out every glass panel, and the pair of 10.25-inch screens staring back at you run Mercedes’ responsive and quick MBUX infotainment system. There are fewer menus and screens to dig through than in a more richly-equipped higher-class of Mercedes, which actually makes the system slightly more manageable and less intimidating. The optional Burmester sound system was nowhere near the quality of Burmester sound systems in those more expensive Mercedes models. You can spend big bucks and option up all of Mercedes’ excellent driver assistance systems, which is a good call if you’re planning on road trips or dreading being stuck in gridlock.

Simply put, none of the A 35’s competitors can match it in driving drama or interior luxury. The M235i Gran Coupe is like dried toast comparatively. Both the Golf R and Audi S3 are considerable alternatives, but both have new-and-improved versions on the way. A Cadillac CT4-V is the dynamic wunderkind of the class with its shockingly good all-around driving performance and rear-drive platform at a very competitive price. Lay off the options list for the A 35, and it starts to make sense as an enthusiast’s hot compact. The value argument drifts away as the price rises high above the $50,000 mark (our tester was $56,020), as much more impressive performance sedans come into play like a nicely equipped Alfa Romeo Giulia, or even a base BMW M340i.

If you’re in the game for a cheap AMG Mercedes (relatively speaking), though, the A 35 is a splendid way to step into the sub-brand. You’re paying a couple thousand less than the CLA 35, and we don’t buy the argument that the “coupe” version is the better-looking car. Quite the opposite. When Mercedes gets around to making it more comfortable and daily-driver-friendly, then we can give it an even more enthusiastic two thumbs up.