In the high-performance smorgasbord known as BMW Test Fest, held this year at New York’s Monticello Motor Club, there were richer, meatier dishes than the 2020 M2 CS. Among them: a 612-horsepower, $142,000 Alpina XB7, which plopped 5,900 surprisingly graceful pounds on Monticello’s tabletop-smooth track. The M5 and M8 Competition (at a respective $111,095 and $134,995), whose absurdly over-sauced, 617-horsepower V-8s make them faster than a C8 Corvette or Porsche 911 Carrera 4S from 0-60, or in the quarter-mile.

By those standards, the limited-run M2 CS coupe seems an amuse bouche, with “only” 444 horsepower from the twin-turbo inline-six used in the larger M4 Competition. But ask a subset of BMW fans — you know, the ones who bitch about BMW not building ‘em like they used to — to name their favorite current model, and the M2 CS will have them raising hands like a classroom nerd in the front row.

The M2, of course, was an answered prayer for Ultimate Driving Machine cultists in 2016: a little coupe with a big heart, an optional six-speed manual, and a $55,495 price that felt like a rare bargain in Bimmer world. Its single-turbo, N55 3.0-liter inline-six developed 365 horses and 369 lb-ft of torque, good for a 4.1-second scoot to 60 mph. In terms of pure driving pleasure, the M2 was feted as the closest thing to a vintage E46 M3, even if it officially descended from the BMW 2002 built from 1968 to 1976. 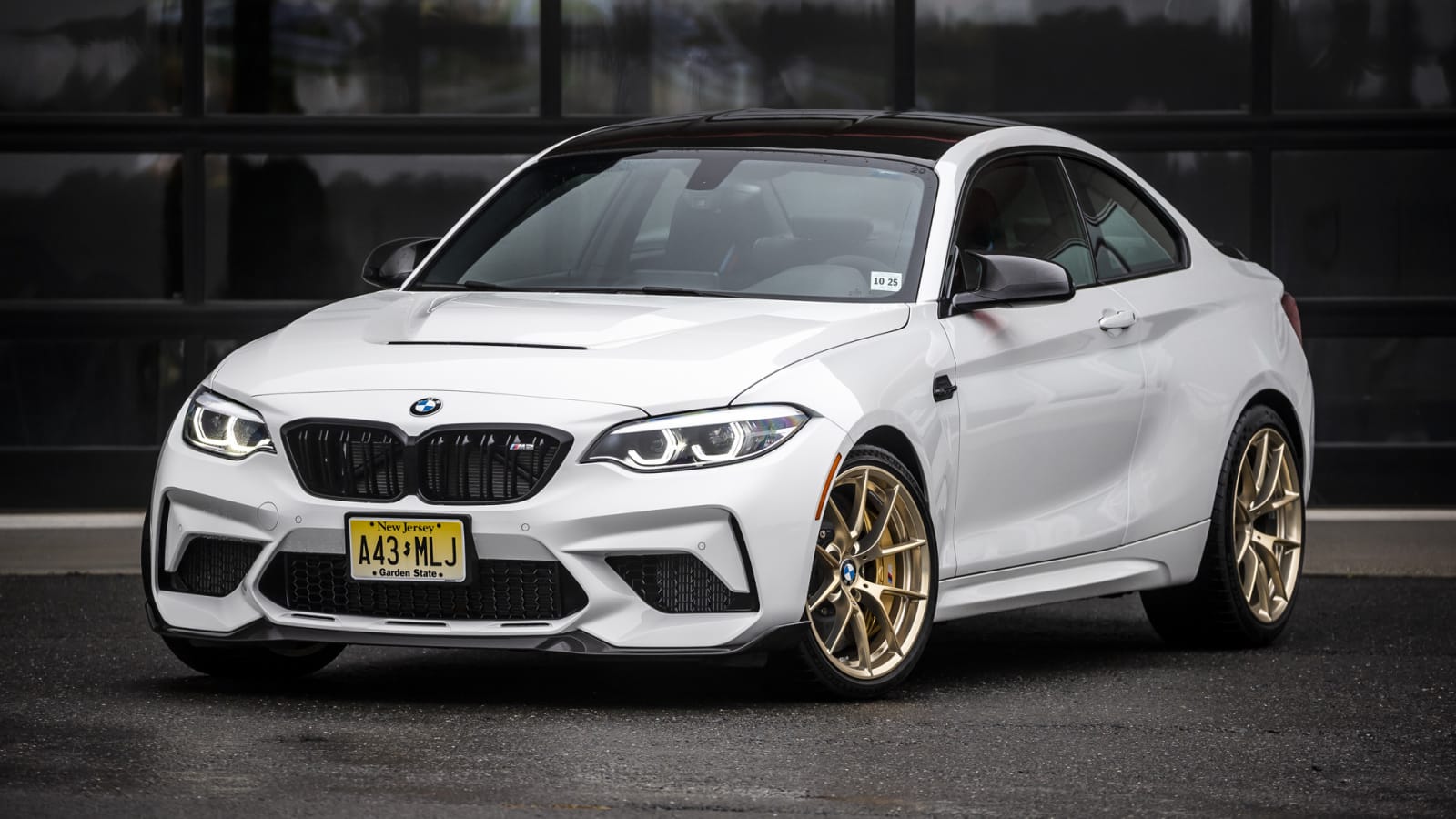 The M2 CS is no bargain at all, at $84,595. But this pocket Hercules still made quite an impression on Monticello’s 4.1-mile circuit, and on the surrounding fall-foliage-tinged roads through the Catskills.

In its subcompact class, dominance is assured by another hand-me-down from a bully brother: the M4 Competition’s twin-turbo 3.0-liter inline-six, with 444 burly horsepower and 406 lb-ft of torque. And this M2 CS is a wickedly track-capable car, basically a roll cage and fire extinguisher away from being a turnkey racer. BMW even developed the car side-by-side with an M2 CS Racing model.

BMW’s choice of tire underlines the hardcore approach. Michelin Pilot Sport Cup 2’s wrap 19-inch forged alloy wheels in a striking matte gold finish. These fast-wearing, ultra-sticky Michelins are among the world’s top street-legal track tires. They’re not ideal on this day, with a spitting rain falling on the cars’ Arctic White and Misano Blue paint jobs. BMW is actually asking U.S. buyers to sign a waiver acknowledging the Cup 2’s propensity to hydroplaning in the wet and increasing uselessness as temperatures fall below 45 degrees.

But the slick conditions prove instructive, eliciting deja vu from my two-day, M2 Racing School at Monticello last year — including a full day of wheel-to-wheel racing in the rain. This latest M2’s chassis is so brilliantly pure, its handling so neutral, that I’m almost immediately humping the car around the hilly circuit. It’s slower than I’d run in the dry, sure, but the BMW never hints at an off-track excursion. When the M2 CS begins to push wide or get squirrely, the mildest correction of throttle or steering puts it back in the game. Credit in part a standard Active M Differential, which keeps the BMW churning through curves by divvying up to 100% of torque between rear wheels, based on variables such as steering angle, throttle position and yaw rate. 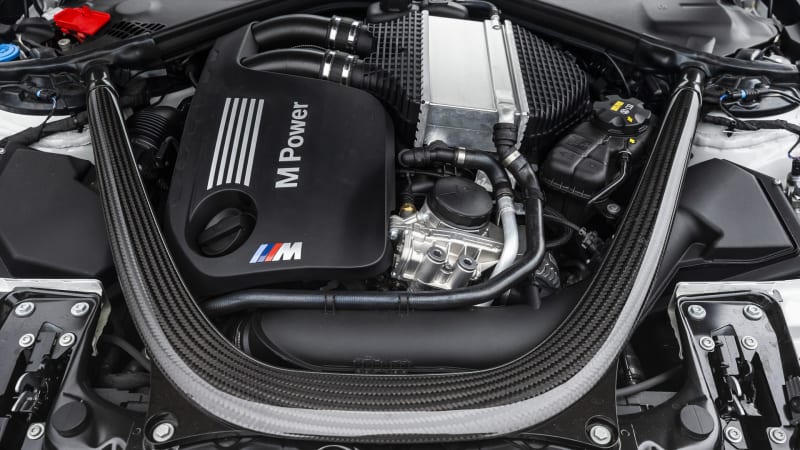 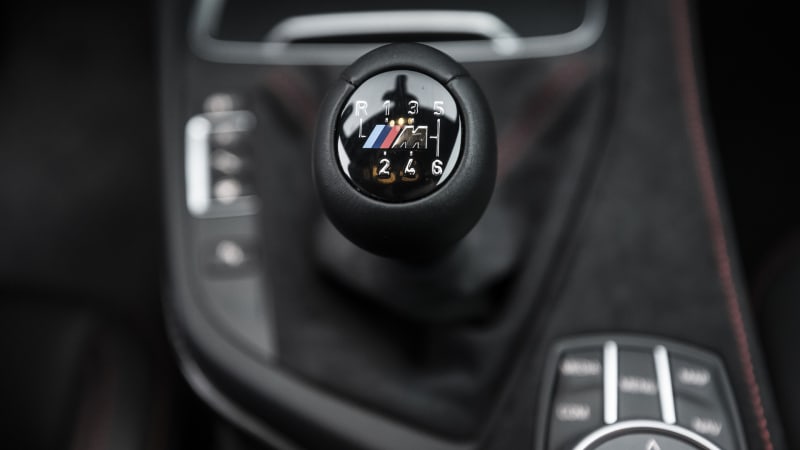 The inline-six emits a bruising mechanical howl to its 7,600-rpm redline, mediated through a seven-speed, dual-clutch automated gearbox. That excellent M DCT transmission adds $2,900, and the best is yet to come for our street drive: A standard, six-speed manual with a beautifully damped, precise lever and a rev-matching function. BMW figures a 3.8-second rip to 60 mph with the automatic, or 4.0 seconds with the manual, and a 174-mph top speed.

The six-speed M2 CS — a 444-horse BMW, with a stick! — was the dream car you might imagine, heightening the man-machine connection on a romp through the Catskills. And when the track dried out in the late afternoon, and I helped myself to a dozen or so extra laps, during which the optional carbon-ceramic brakes made a case for their $8,500 upcharge. (I’d still skip them to save money.) 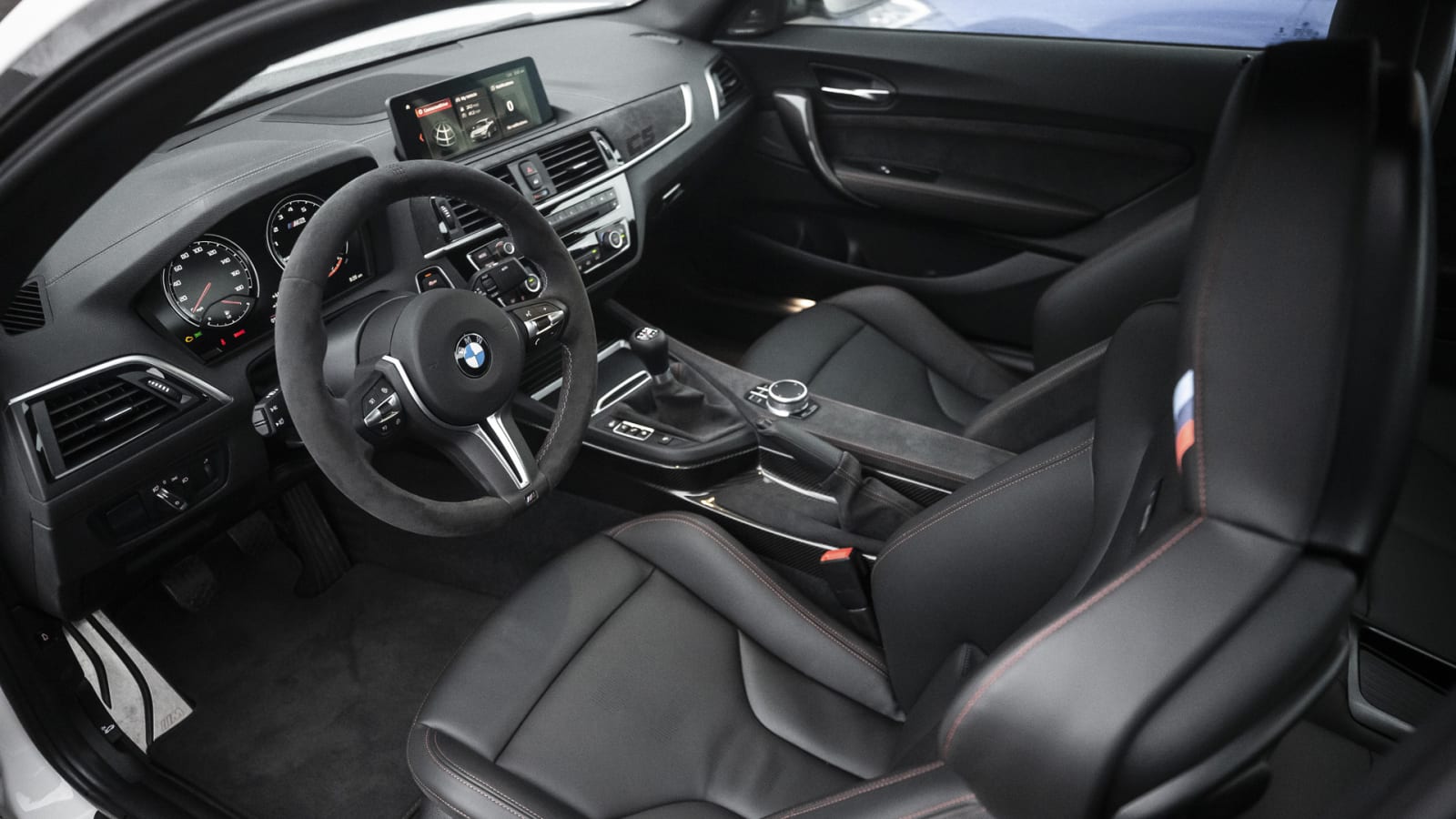 Aggression continues with a chunky, Alcantara-wrapped M steering wheel and carbon-fiber paddle shifters. Sport seats, straight from the M4 Competition, flaunt bicep-thick bolsters and cutouts for racing harnesses, with requisite red-and-blue stitching. More black Alcantara appears on the dash, door panels and center console. A classic, round analog speedometer and tach tell the driver everything he or she needs to know. A smallish dashtop screen runs the solid iDrive 6.0 infotainment system, and a CS logo glowers from dashboard trim. The back seat is stingy as ever, but trunk space is surprisingly roomy.

Exclusivity then becomes the strongest argument for the M2 CS. BMW is only building about 2,200 copies, of which just 500 or so will reach our shores. U.S. production ends in December, and there are no plans for a 2021 model. The M2 CS is a brilliant car, but it’s a BMW for the true believer — ideally, with a belief system that includes workouts on tracks like Monticello.