The 2021 Kia K5 replaces the long-running Kia Optima as the brand’s midsize family sedan, and it brings with it bold, aggressive exterior styling and a seriously comfortable driving experience. Not only that, it’s a good value compared to the competition. And while it does sacrifice some sportiness for its comfort, Kia will introduce a high-performance GT model by the end of the year that should rectify the lack of driving excitement. There are some sedans on the market with a slightly better blend of sportiness and comfort, such as one of our favorites, the Honda Accord, as well as the gracefully aging Mazda6, but the Kia’s strong points are enough to make it a must-see for midsize car shoppers.

The Kia K5 is a new model introduced this year, but it could certainly be considered the next-generation Optima with a name change.

While the K5’s exterior is bold and aggressive, the interior is less in-your-face. That’s not to say it isn’t still stylish, though. The dashboard has a unique design with separate levels that gives it some visual interest. On most models, you get aluminum-look trim on the dash and doors, but the EX features fairly convincing matte-finish faux wood trim. The plastics are all high-quality with a welcome number of soft touch surfaces and interesting, attractive patterns.

The instruments and infotainment screen occupy a large monolith in front of the driver and the center of the dash. The gauges are analog with a display nestled between them. The standard infotainment touchscreen is an 8-inch unit (in the photos above) flanked by physical shortcut buttons and knobs. It’s the same system that Kia has used for several years, which is easy to use but a bit dated in appearance. Available as an option on the GT-Line and EX is a 10.25-inch screen (pictured below). It’s larger and features updated graphics that are nicer to look at, but it functions similarly. That’s not a bad thing. Instead of normal shortcut buttons, this system also picks up touch-sensitive shortcut controls rather than physical buttons. Quite simply, they don’t function as well and we’re glad the climate control sticks with traditional buttons and knobs regardless of infotainment system.

Also worth noting is that seating accommodations are quite comfortable. The front seats in particular are thickly cushioned with gentle bolstering. The seats have lots of adjustment so a comfortable position is easy to find. The rear seats aren’t as nice, but are far from offensive. Space is reasonable as well, and we go into greater detail with that in the next section. 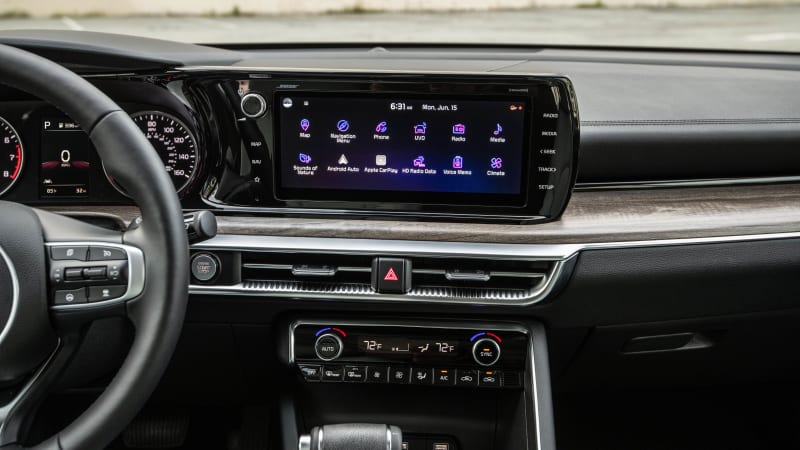 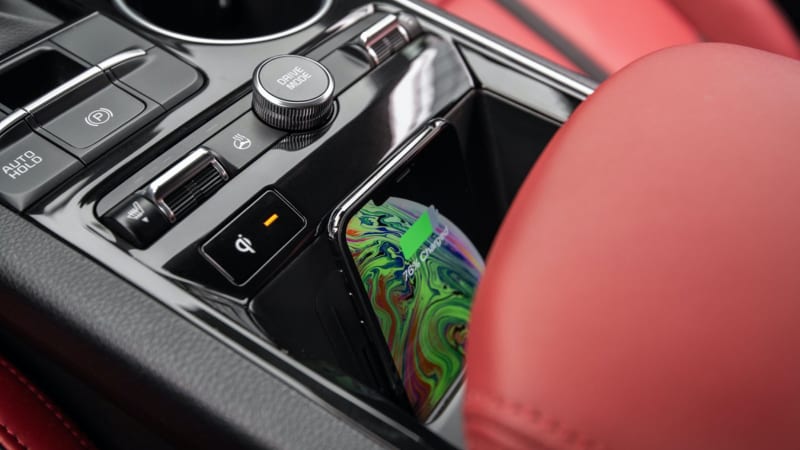 The K5 measures in at 193.1 inches long, 73.2 inches wide and 56.9 inches tall. It also has a wheelbase of 112.2 inches long. Compared to the Optima it replaces, it’s about 2 inches longer in both overall length and wheelbase. It’s about the same width and about an inch shorter than the Optima. Next to segment benchmarks such as the Honda Accord and Toyota Camry, the K5 is within an inch either way of both sedans.

Inside, the K5 offers plenty of legroom and shoulder room for both front and rear passengers. However, head room is a touch tight in both rows despite the specs showing that the K5 has more headroom than the Optima, Accord and Camry. On paper, shoulder room is nearly identical to the Honda and Toyota. Legroom specs vary considerably among these cars, but having sat in the back, there’s plenty of legroom in the back of the K5 for adults to be comfortable for long periods of time.

Cargo space for the Kia K5 is 16 cubic feet. That falls between the Accord and Camry. The Accord has 0.7 cubic foot more space and the Camry has 0.9 cubic foot less. It’s roughly similar to the Hyundai Sonata.

Every Kia K5 except for the GT gets the same turbocharged 1.6-liter four-cylinder and eight-speed automatic transmission. It makes 180 horsepower and 195 pound-feet of torque. LX, LXS, GT-Line and EX trims get front-wheel drive as standard, and all-wheel drive is an option on the LXS and GT-Line. Fuel economy with front-wheel drive is 27 mpg in the city, 37 on the highway and 31 combined. The base LX trim is the only trim to get auto start-stop, and its fuel economy is slightly higher with ratings of 29/38/32 mpg. The all-wheel-drive K5s see a dip in fuel economy to 26/34/29 mpg.

The GT trim level is the only one to get a turbocharged 2.5-liter four-cylinder that makes 290 horsepower and 311 pound-feet of torque. It comes with an eight-speed dual-clutch automatic transmission and front-wheel drive only. Fuel economy numbers weren’t available at the time of this writing.

Where the Kia K5 excels is in comfort. The suspension is tuned soft, but with excellent body control so that you have a smooth, sumptuous ride. The cabin is very quiet, as is the engine and transmission. Throw in supportive seats and seating position, and the K5 is easily one of the most comfortable family sedans.

But if you want to drive with some vigor, the K5 falls short. The steering is nicely weighted with some feedback, but isn’t quite as good as that of the Honda Accord or Mazda6. The soft suspension exhibits a fair bit of body roll in corners. The chassis doesn’t respond quickly to inputs, either, and there’s very little grip. Plus, the transmission is slow to shift, so it’s hard to make the most of the 1.6-liter engine.

We expect the Kia K5 GT will solve some of our dynamic disappointments with the regular K5. It has a sport-tuned suspension that should, in theory, improve the handling. It will also have far more horsepower, and its dual-clutch automatic should be a snappy shifter. Though we hadn’t driven it at the time of this writing, we have driven a prototype of the closely-related Hyundai Sonata N Line, and it was promising.

What more can I read about the Kia K5?

In our first drive of the K5, we give detailed driving impressions and how the K5 fares against the competitive midsize sedan segment. 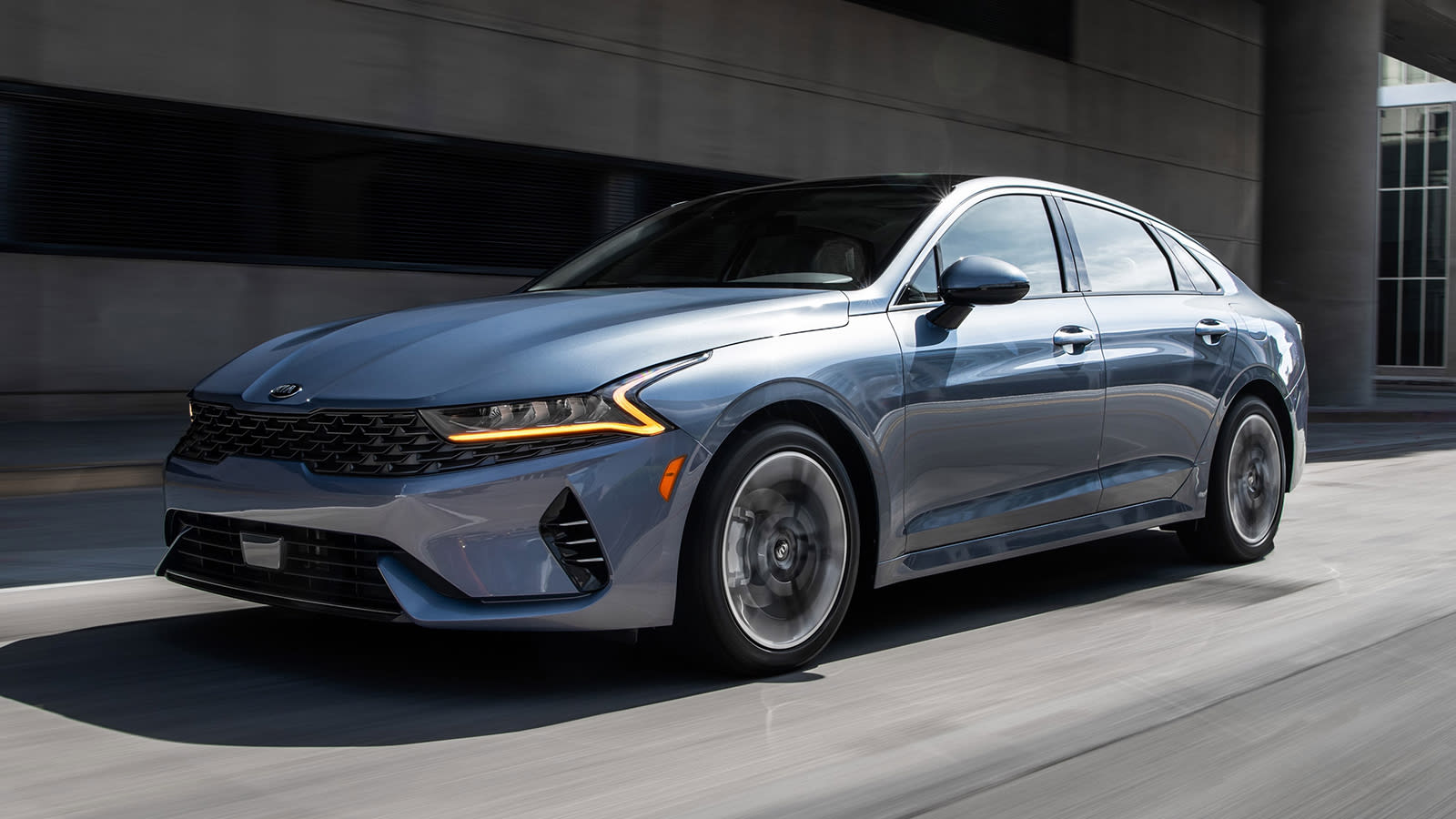 We dive deep into the Kia K5’s interior with the sporty GT-Line model to see how it stacks up. 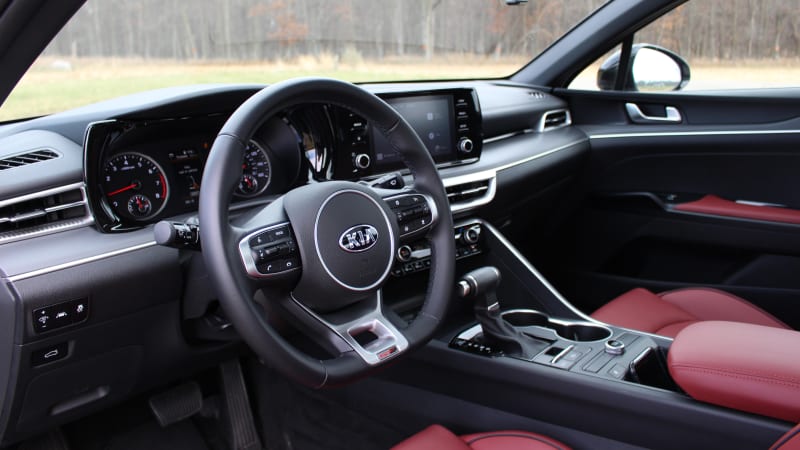 Flip through our set of photos where we find out how much luggage fits inside the K5’s trunk.

What features are available and what’s the K5’s price?

All prices below include the $965 destination charge. You can find more information on each of the below trim level’s added feature content plus specs and local pricing here at Autoblog. 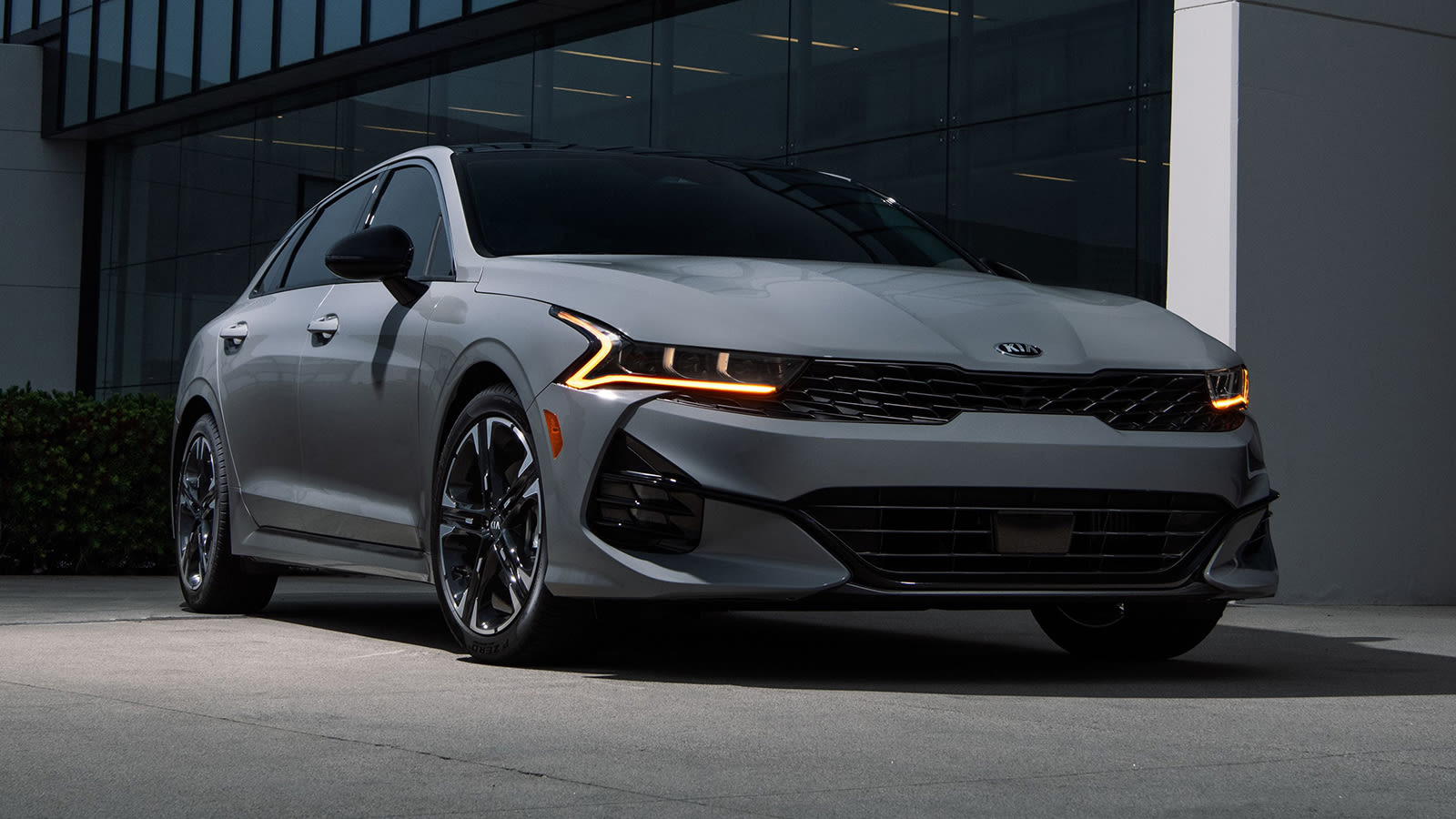 What are K5’s safety equipment and crash ratings?

The base K5 includes standard forward collision warning with automatic emergency braking and pedestrian detection, lane-keeping assist and a rear occupant warning system. Blind-spot and rear cross-traffic warning systems are added on the LXS, GT-Line, EX and GT trim levels. EX also adds rear parking sensors as standard. GT-Line and EX get several safety feature options not available on LX and LXS. GT-Line options include adaptive cruise control with or without navigation-based curve speed assist and highway steering assist. The EX only has the navigation-based adaptive cruise control as an option, and it also has optional rear emergency braking. The GT has the same options list, but rear parking sensors are also an option.

The K5 earned a five-star overall safety rating from the NHTSA. Its side crash test rating was five stars, while the front and rollover rating were both four stars. The IIHS has not yet tested the K5.