The 2021 Kia K5’s exterior design grabs all the attention with its Stinger-like front end, flashy lighting and sportback shape. It’s an impressive looking sedan, but it begs the question, does the interior measure up and match Kia’s stellar effort outside?

Red seats like the ones in our GT-Line tester are a great place to start. The red and black two-tone leatherette is optional, but the option is free, so it’s a no-brainer. Unlike the more sedate Sonata, the K5 is noticeably sportier inside. Its flat-bottom leather steering wheel and gear lever pulled straight from the Stinger help immensely in giving it this feel. Though, it is disappointing to see the shifter is covered in cheap-feeling plastic here, versus the leather in the Stinger.

The stepped dash design looks fresh and with the times, and Kia’s choice of perforated-look plastic trim is way better than just flat black plastic. There’s even faux stitching running from side-to-side. Its air vents are horizontal and sleek, but the ridged surface underneath them is even more intriguing, as it brings texture to a piece that typically doesn’t have any. 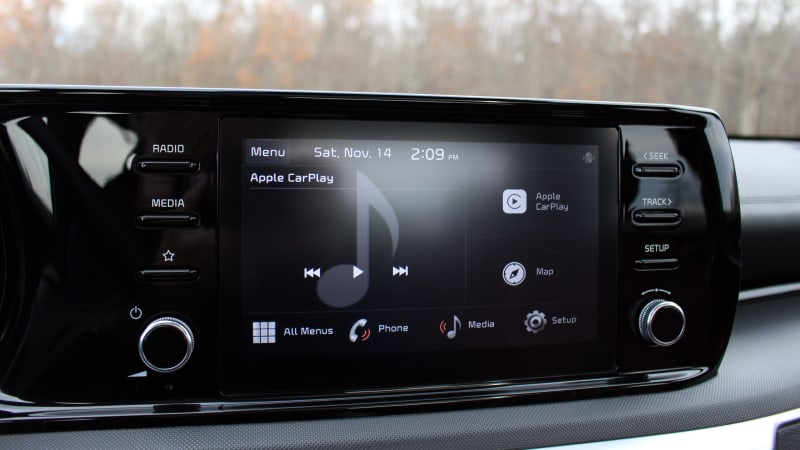 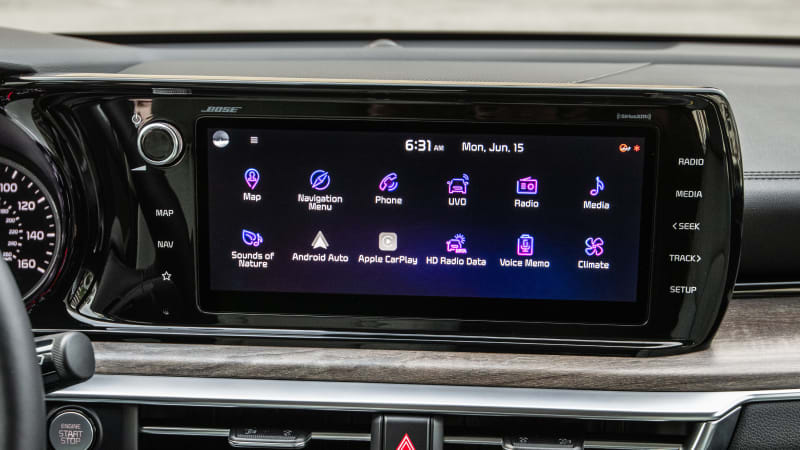 Above all, though, Kia has made its monolithic infotainment display the star of the show. The 8-inch touchscreen (top left, in our test car) is standard, but a slightly larger 10.25-inch screen (top right) is optional. The smaller screen is accompanied by hard audio buttons flanking it, while the bigger screen gets touch haptic controls and loses the tuning knob. Wireless Apple CarPlay and wireless Android Auto comes standard across the range, but we had issues with our CarPlay connection. After random amounts of time throughout the week of testing, it would squawk at us with an error, forcing us to disconnect then reconnect to get it back working.

You get hard buttons or knobs for all the vitals having to do with the climate control, making that super easy to operate. Assuming you pony up for heated seats, the controls for those are done in the same toggle switch fashion as the Stinger’s and sit rear of the gear shifter. It’s a similar, analog story in the instrument cluster. We wish the fully digital dash from the Sonata were available, but it’s not. Instead you get a small 4.2-inch center display and physical gauges to flank it. 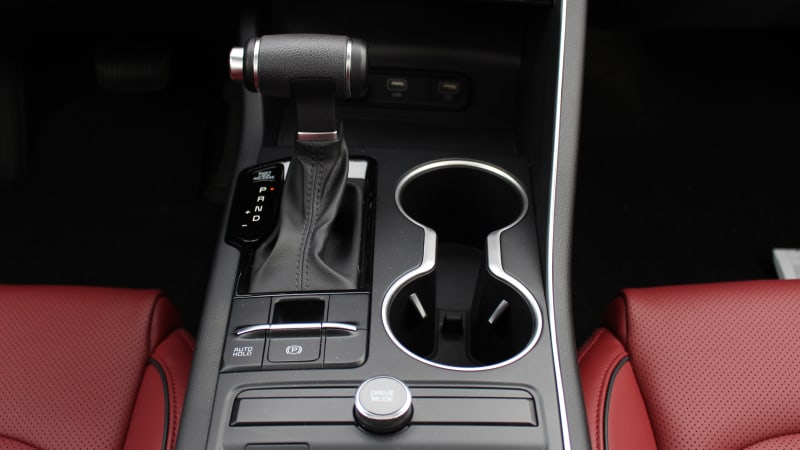 Usefulness is slightly above average in the cabin. The cubby fore of the shifter is big enough for the largest cell phones, and the USB outlets are conveniently placed right in the cubby. It’s not the pretty, invisible wire solution you get in the Honda Accord, but it effectively keeps them from snaking everywhere throughout the cabin. Both cupholders are large, and you get an electric parking brake that saves even more space. If you’re using either of the wireless smartphone connection technologies, Kia’s nifty vertical wireless smartphone charger will be of great use. Just slot the phone in its secure nook by the armrest every time you get in, and it’s both out of sight and charging away. You’ll also notice a weird, upturned grab-handle-looking thing on the door panel. It does indeed function as a grab handle, and it’s a nice touch to separate the K5’s interior from others. 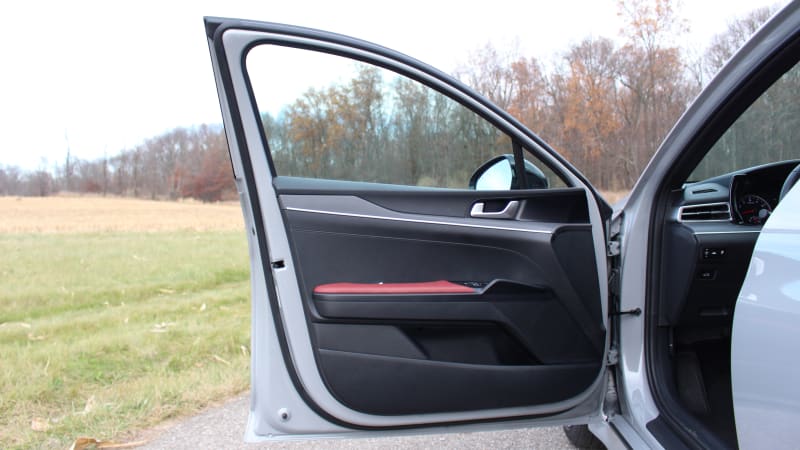 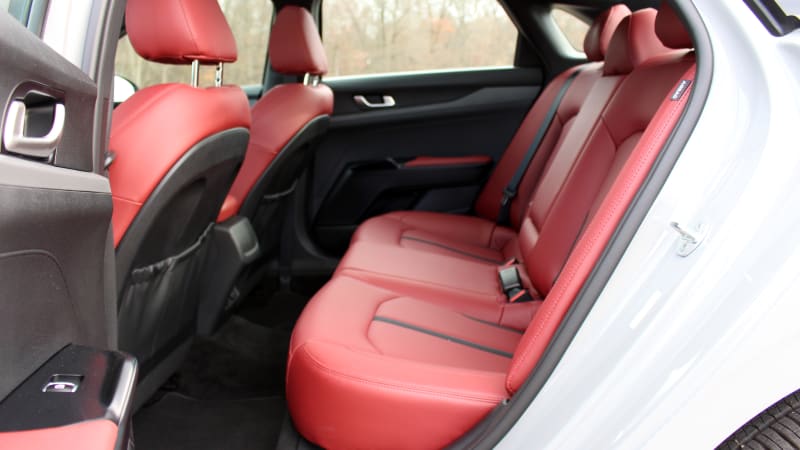 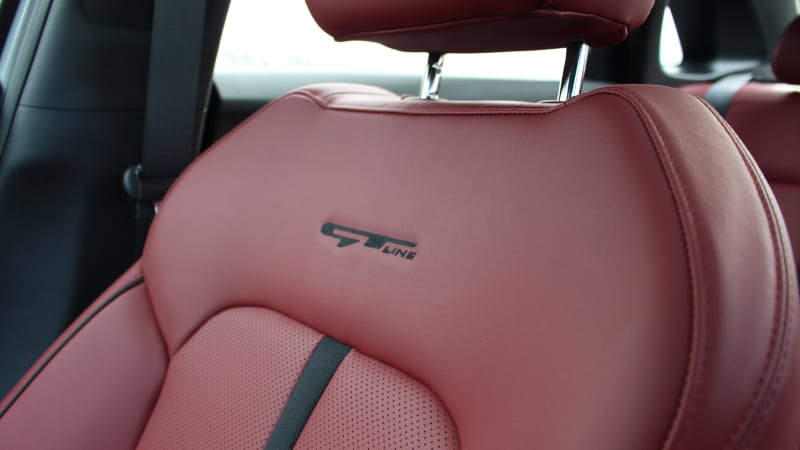 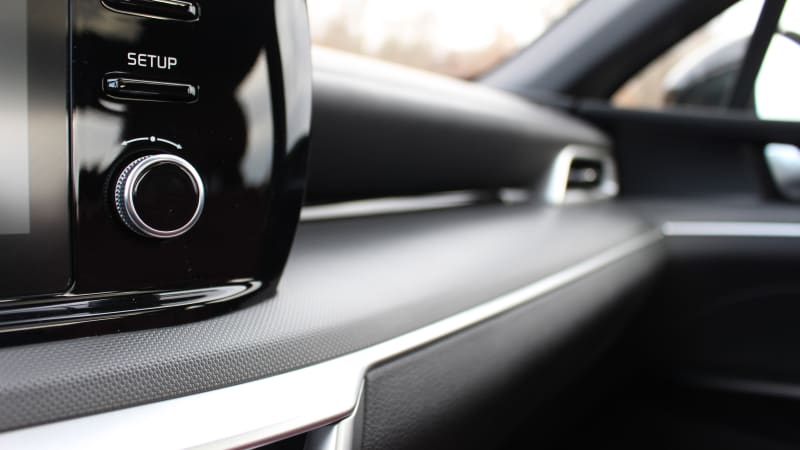 Backseat passengers will be met with a pleasant 35.2 inches of legroom. The Accord crushes it and everybody else in this category, but adults will still be plenty comfortable in the rear seats. You even get a splash of red on the rear doors to spice it up. Two USB ports sit back there on all but the base LX model.

Moving back up front, the seating position is very normal for this class. You can adjust the seat to sit relatively low, and the cushions themselves are comfortable. There isn’t much bolstering, but that’ll come with the full-on GT and its added performance. One complaint we had is noise-related. Recent weeks have found us in the driver’s seat of the K5, Accord and Altima, and the K5’s interior was more bothersome on our ears than the others.

Even with some small quibbles, the K5’s interior is a fitting match for the eye-catching exterior. There are a few things we mentioned that Kia could do to improve it, but it’s standing far taller than the Optima was in its class. If you want a little more luxury and less sport, allow us to direct you to the Sonata. And if you want to know more about how the K5 drives, rear our First Drive review here.