Apologies to those looking for the first drive review of the Bronco you’re thinking about. That one is coming in the future. Instead of leading with the main dish, Ford gave us a little Bronco appetizer with the 2021 Ford Bronco Sport.

For those who may have missed Bronco-palooza during the big reveal, know that the Bronco Sport is the crossover-based little sibling of the truck-based Bronco 2-Door and 4-Door. The Bronco Sport shares its unibody platform with the Ford Escape (and by extension the Focus sold in Europe), but don’t mistake it for a half-hearted brand play. Putting the “Bronco” name on a Ford product seems certain to help boost sales, but Ford has not sullied the name with a poorly executed product. If you were worried about the Bronco Sport just being a boxy Escape, worry less.

The Bronco Sport is significantly smaller than the Escape, measuring 8.4 inches shorter in overall length, 1.3 inches shorter in wheelbase, 3.0 inches narrower and as much as 5 inches taller. One look at the exterior design should remove your head even further from Escape Land. The design obviously borrows from the big Bronco, achieving a more convincingly rugged look than Jeep’s Cherokee or Compass. Styling elements like the round LED lights, safari roof, “Bronco” grille and special Bronco badging satisfy the requisite branding elements, while the boxy silhouette, sidewalls full of chunky tires, available steel-look aluminum-alloy wheels and truck-like hood back up the adornment with substance. The Bronco Sport may be a crossover, but it looks genuinely cool in the flesh.

By contrast, there’s no telling the Escape and Bronco Sport apart under the hood. The base engine in most trims (Base, Big Bend, Outer Banks) is Ford’s 1.5-liter turbocharged three-cylinder that produces 181 horsepower and 190 pound-feet of torque. Opt for the Badlands or First Edition, and you get the stronger 2.0-liter turbo four-cylinder with 245 horsepower and 275 pound-feet of torque. An eight-speed automatic transmission handles shifting for both engines, and all-wheel drive is standard equipment. Models with the bigger engine (Badlands and First Edition) get a torque-vectoring rear differential that can send all rear axle torque to a single rear wheel if need be. It has a locking function, which you can activate by pressing a button by the G.O.A.T. modes dial (that’s “Goes Over Any Terrain,” by the way). 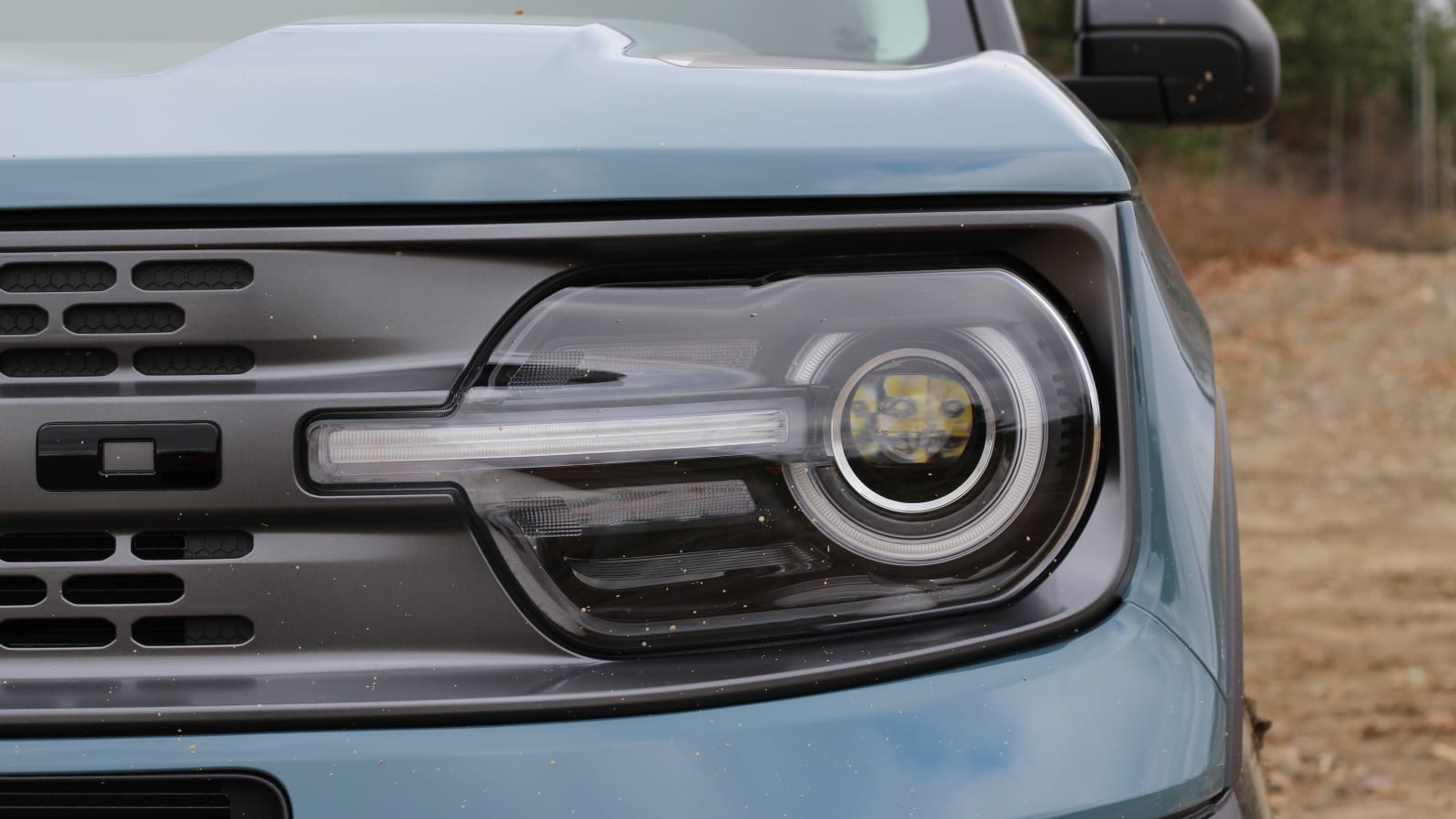 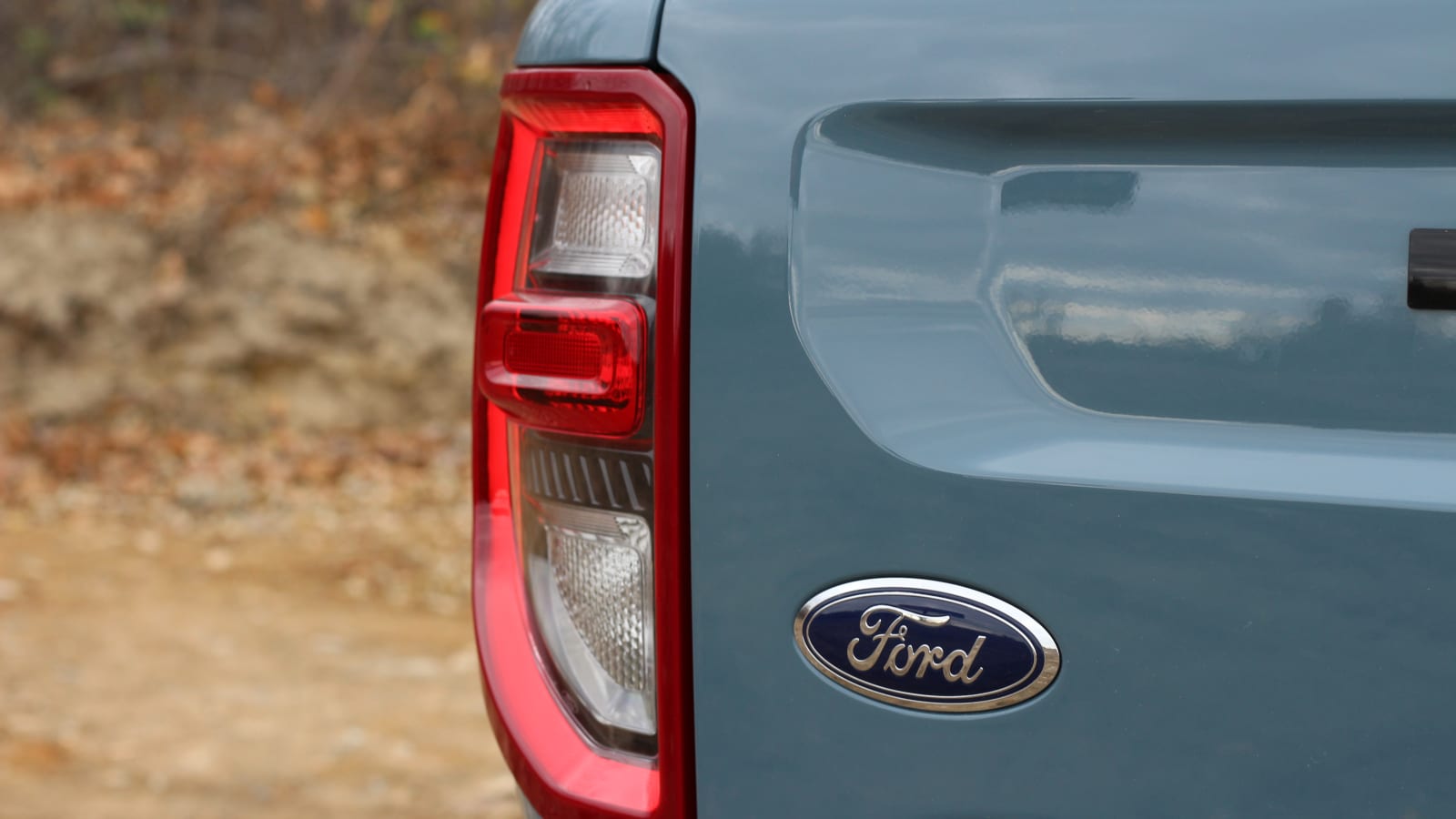 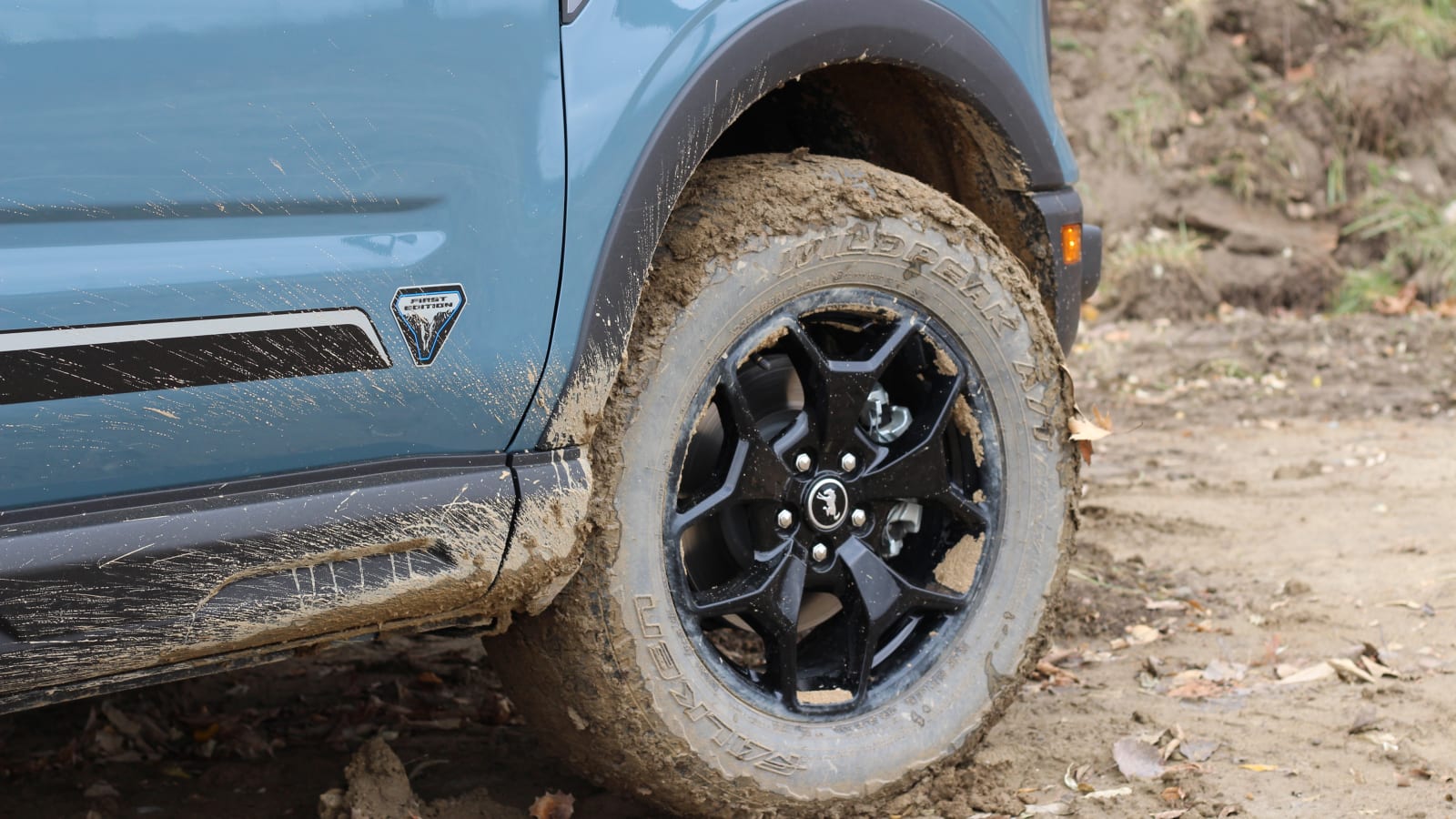 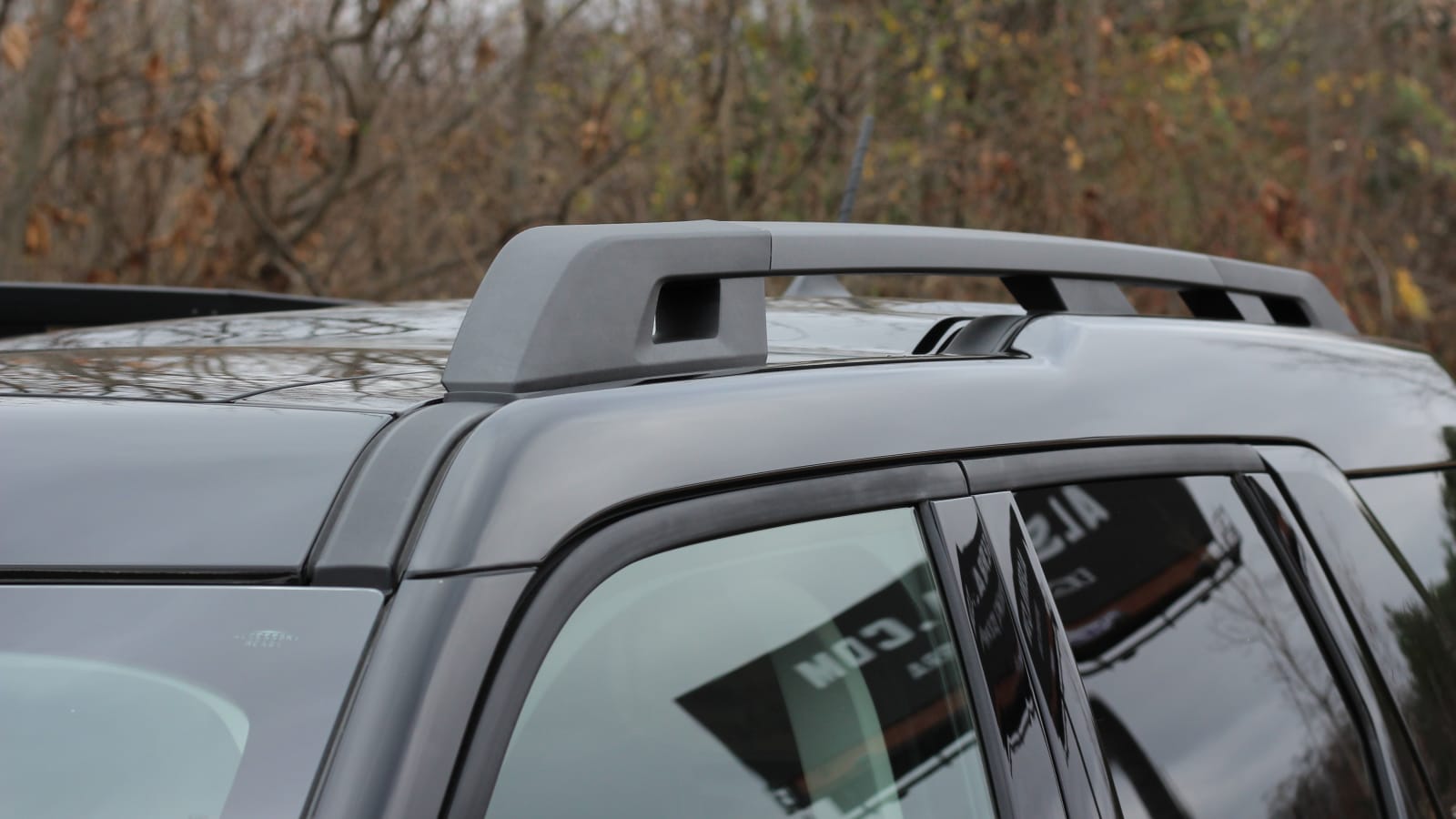 Our first turn behind the wheel is on road in a Bronco Outer Banks, the most luxuriously equipped Bronco Sport with the 1.5-liter engine. From the moment you step inside, it feels like a little truck – an impression that was intentional, according to designers. The A-pillars are further back and the windshield more upright compared to the Escape and other crossovers. You sit in an upright position and gaze over a long, straight hood with two large power bulges that hint, rather disingenuously, at a big engine underneath. Little ridges sit on the edges of that hood to give you an indication of where the edges of the vehicle are, perfect for tight off-roading.

The truck vibe isn’t just a matter of appearances, though. Even the Bronco Sport’s controls have a truck-ish feel to them. The steering has a hint of play/liveliness, making for a small truck feeling on the road. The wide brake pedal has that heavy feedback we tend to associate with full-size trucks like the F-150. This little crossover is truly trying its best to masquerade as a serious off-roader in a pint-size package. It’s charming and different in this class of largely homogenous driving experiences. Nobody will mistake it for an Escape from the driver’s seat.

The only place where the Bronco Sport’s “Escape-ness” shows through is interior design. There’s obviously shared switchgear and a common architecture (their center consoles from HVAC controls to armrest are nearly identical), but there are key differences. Many of them for the better. The air vents are higher, straddling the shared touchscreen, freeing up space for a handy shelf for a phone or something else small. There are also nifty touches like the rubberized, graspable adjustment prongs on those air vents and the sturdy-feeling G.O.A.T. Modes dial. So it’s reminiscent of the Escape, but it’s also super functional and fit for the vehicle.

Many will buy the Bronco Sport and never leave the pavement. For them, the 1.5-turbo is a solid companion. It’s peppy, but not especially quick, and the three-cylinder doesn’t sound half bad under load. The transmission just melts into the background, which is just as well for a vehicle like this — it neither frustrates nor wows. There’s an extra bounce and stiffness to the on-road ride you don’t get in other crossovers this size. It’s not so much as to be uncomfortable, but you can tell there’s an off-road-tuned suspension underneath, and it makes popping around town that little bit more fun and involved. That doesn’t translate into corner-carving prowess, as the Bronco Sport is a little sloppy when you start to push. An Escape has both superior ride comfort and better handling (the longer wheelbase may also have something to do with that), but that’s to be expected.

The next leg of our journey would show where the Bronco Sport excels: an off-road course fashioned by Ford filled with not-insignificant obstacles. It’s here that we swapped into a First Edition trim, which has all the Badlands off-road goodies, plus every luxury option available. The blue “Navy Pier” leather seats are nice, but even more impressive are the torque-vectoring rear diff, additional transmission and rear-drive coolers, all-terrain tires, unique Badlands suspension and all the other off-road goodies. Ford’s spec sheet is impressive. Badlands models get 8.8 inches of ground clearance; stellar approach, departure and breakover angles; extra underbody protections and a Jeep-sinking 23.6-inch wading depth. Combine this with the powerful four-cylinder and two extra G.O.A.T. modes (Mud/Ruts and Rock Crawl), and you’re left with a little crossover that punches far higher than you’d expect it to.

We climbed up and down steep hills of loose rock, sand and boulders, all the while swapping between the proper G.O.A.T. mode — by altering the all-wheel-drive torque split, transmission shift points, traction control/stability control settings, throttle tuning, brake tuning, and steering weight, each off-road mode does indeed make the Bronco Sport drive noticeably different for the specific purpose at hand. The front camera (only on Badlands and First Edition) proved itself worthy as the Bronco Sport scampered up and over blind crests with sharp turns at the top. None of the big rocks or deep ruts were a clearance issue for the Badlands or First Edition, but the other Bronco Sport trim levels ride an inch lower and could be heard scraping along rocks and bottoming out in the more severe sections.

Ford also set up an autocross-like sandy course where we got to feel the torque-vectoring differential do its thing. It acted quickly and substantially improved the handling on this surface. Power sliding around a hairpin or big sweeper was easy, and assuming you’re in the right mode, the Bronco Sport lets you have all the sideways fun you want without electronic nannies getting in the way. Most owners may never race their Bronco Sport around in the sand, but they’re missing out if they don’t.

The more likely Bronco Sport use case is as a daily driver and weekend adventure companion. For those purposes, it’s perfectly suited. You get vital tech like Apple CarPlay and Android Auto compatibility standard in the 8-inch touchscreen. Plus, the Ford Co-Pilot 360 suite of driver assistance systems comes with every Bronco Sport. 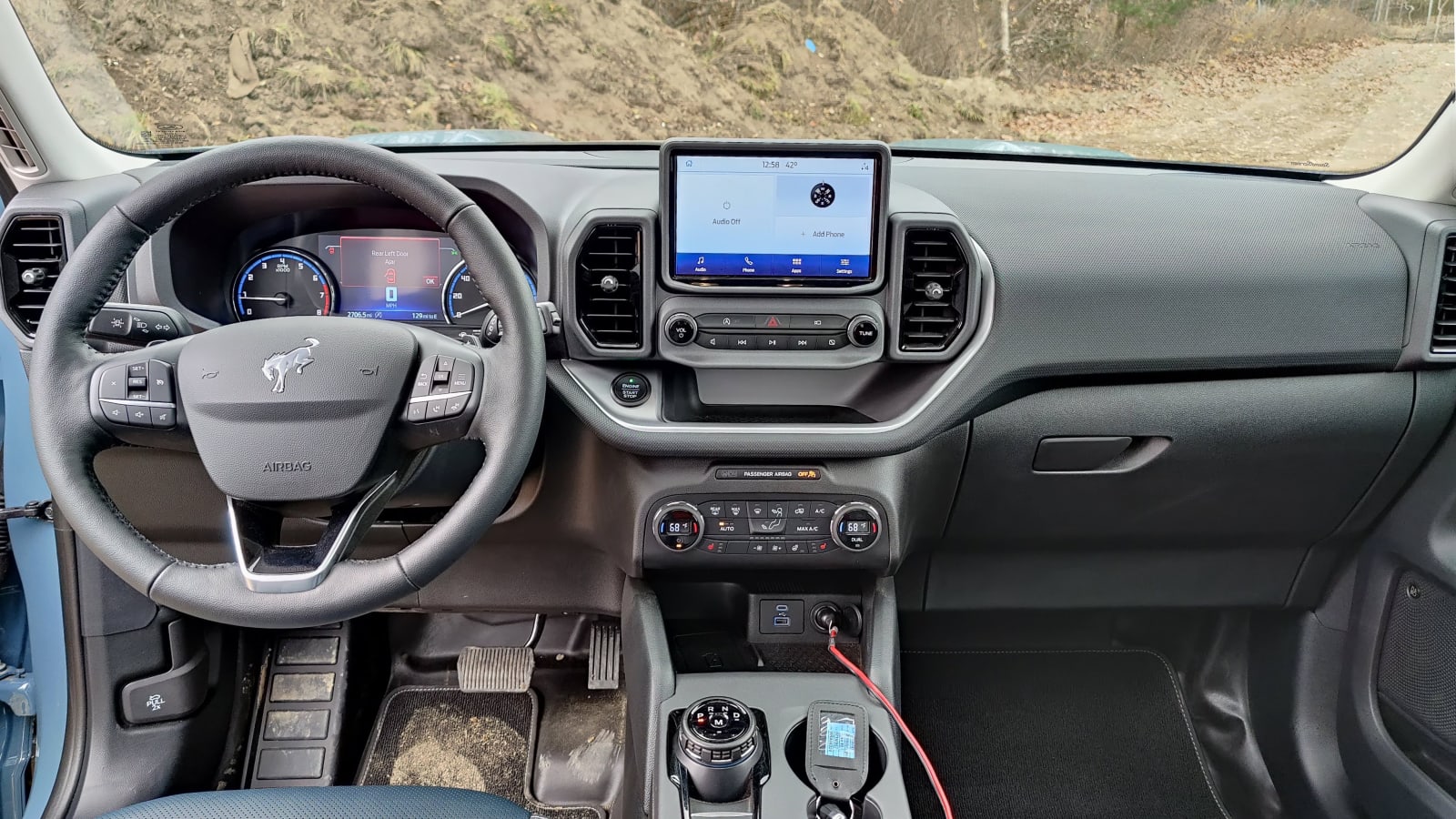 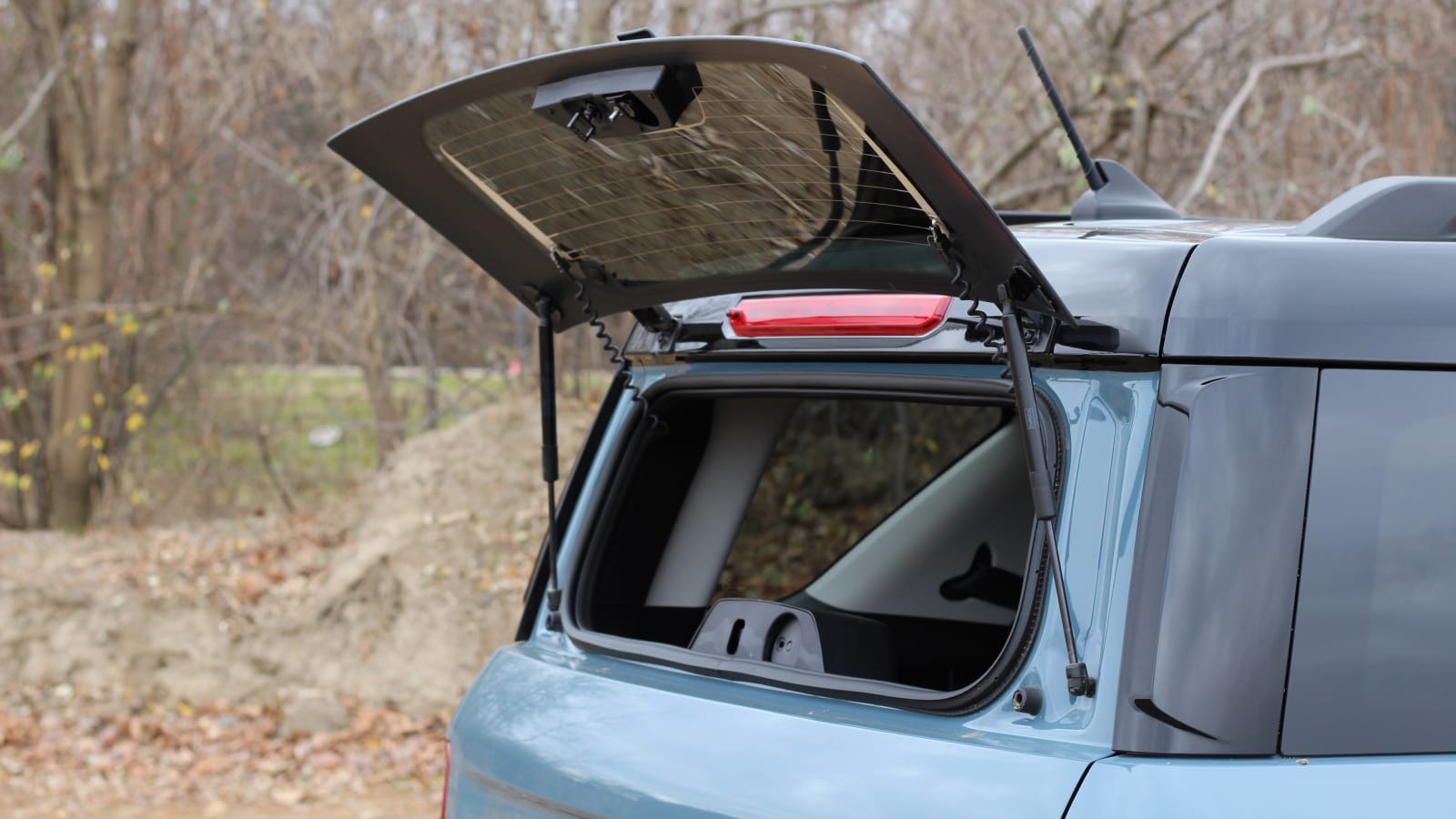 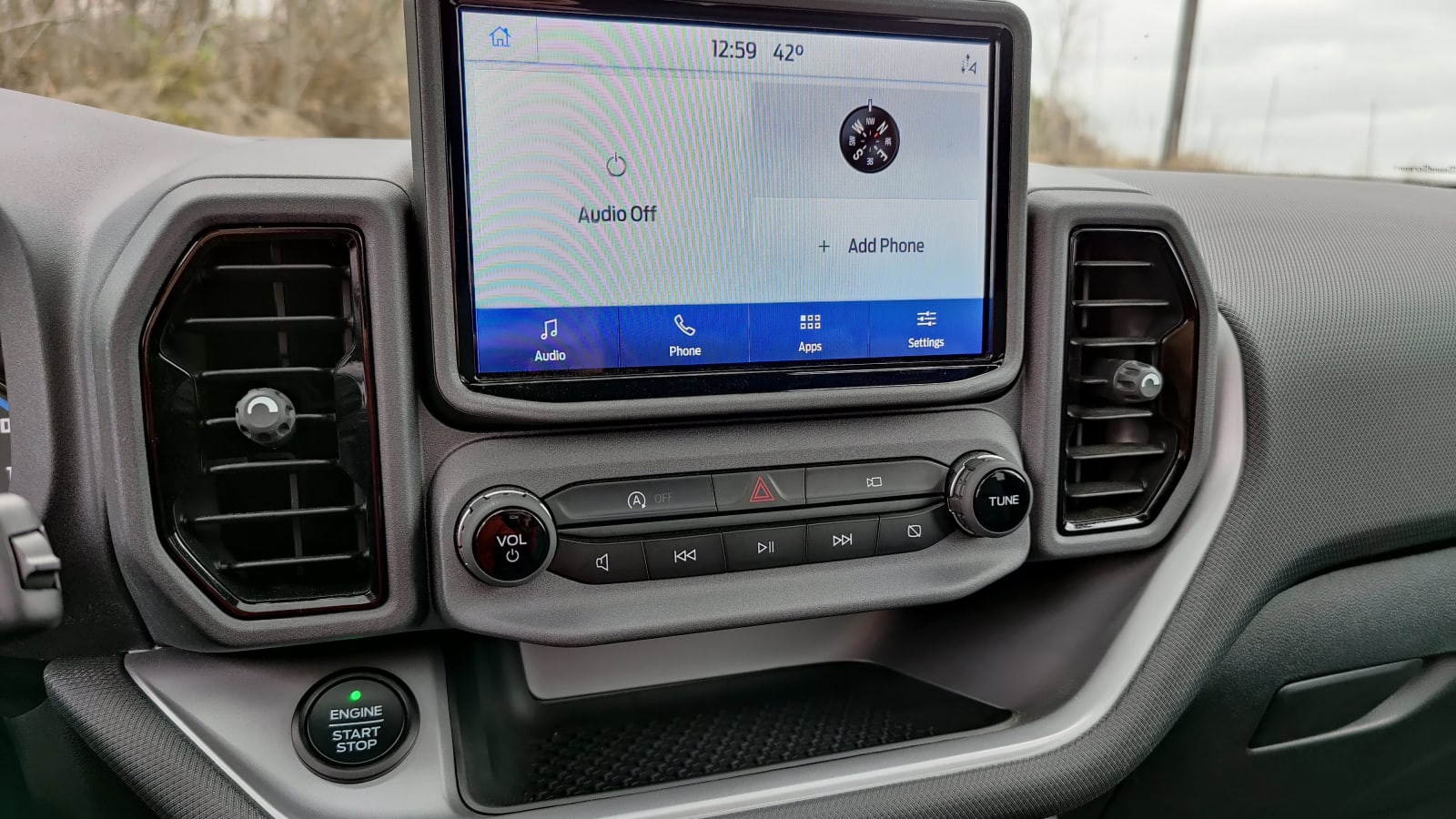 Then, there are the features that weekend hiking and camping warriors will like. The flip-up rear hatch glass is a great design choice that deserves to be on more SUVs and crossovers. Huge liftgate floodlights, MOLLE straps for quick item access, in-vehicle dual-bike storage capability, rubberized easy-to-clean mats everywhere and large raised roof rails make life that much easier in the wilderness. You can trailer up to 2,000 pounds worth of whatever behind you in most trim levels (the Badlands trim adds an extra 200 pounds), and there will be a massive number of accessories available at launch. That this little crossover has more off-road capability than it’ll likely need is just icing on the cake.

Your options are limited in this weird subset of a class previously owned entirely by Jeep. The Compass is Ford’s closest competitor in terms of size and off-road capability, but a Jeep Cherokee is in the same price ballpark, too. From a looks, tech and on-road driving perspective, the Bronco Sport has a distinct advantage.

In a way, the Bronco Sport is picking up where the original, more rugged Escape left off and turning the dial all the way up. As crossovers became more car-like over the years, the Escape went with it. The latest generation is the softest one yet, which Ford certainly did on purpose to make room for the Bronco Sport. The Escape might be all the crossover many folks need, but we can’t help but want the Bronco Sport. It’s more expensive, but the end product is worth the premium. Even if the big Bronco 2-Door and 4-Door has gotten the lion’s share of attention, the superb little Sport still deserves to bear the Bronco name.