It’s a familiar road; one we traverse regularly. It loops around the side of a hill, climbs up in a series of corners and then runs back down the side again into a deep mine. Full of interesting dips, crests, hairpins and switchbacks, it has dirt, gravel and even broken tarmac sections. A perfect rally stage if there ever was one, but this is a section we normally only crawl over.

Not today. With the shoot done and no need to keep the car clean, I just put my foot down. The first part of the road is a bit bumpy and gets the Audi Q2 moving around a bit. As I go a bit quicker, however, the suspension smoothens up, the Q2 feels better tied down, and then, as I exit corners, Audi’s Quattro all-wheel drive kicks in, giving me more and more traction when I accelerate out. 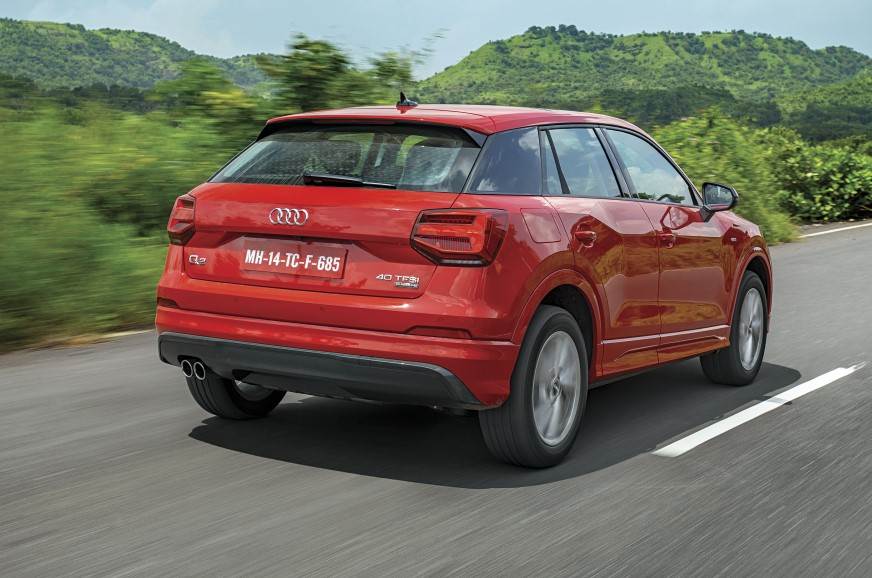 The Q2 will have a niche appeal for those looking for a bit of fun.

The steering isn’t the most feelsome unit around, but set in Dynamic, it is nice and weighty. And as speeds build, it starts telegraphing a stream of information back. As I gain confidence and start upping the pace, the Q2 just comes alive; now we are truly flying. There’s a flat but slightly loose, hovercraft-like feel from behind the wheel; the Q2 needs a bit more goading to tuck into corners, and then, as I look in the rear-view mirror, I see a long rooster tail of dust trailing behind.

There’s no way I can put the Q2’s 190hp down cleanly here. Even with the Quattro system, I have to wait until the wheels are all but pointing straight before I really step on it. The Q2, however, feels quite at home; the suspension just never bottoms out. Can’t help but think of Audi’s rally-car heritage, and the pioneering, championship-winning Quattro system. 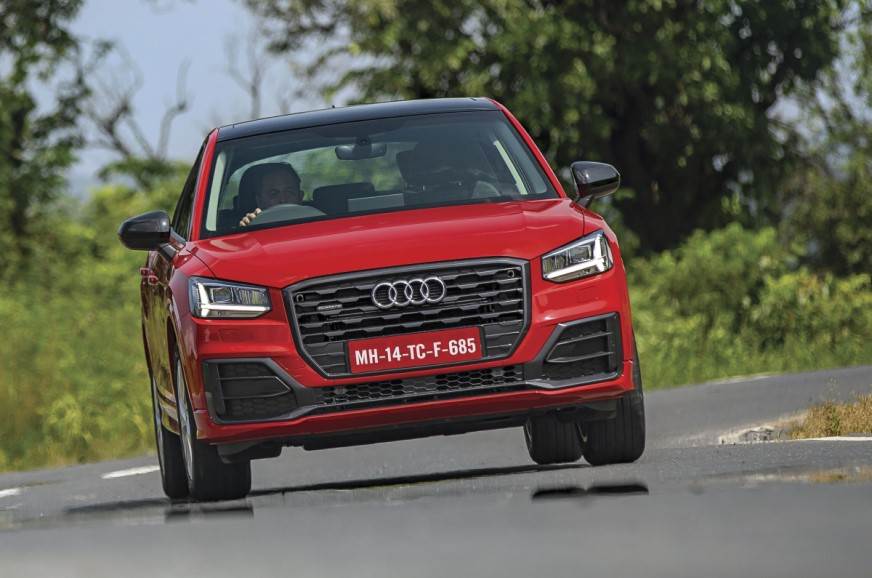 With all its power and the taut chassis, the Q2 also conjures up plenty of thrills once we are back on the tarmac. A lot of this is down to its 190hp power output –strong enough for an SUV that tips the scales at just 1,430kg. The 2.0-litre engine is a familiar one. Powering all manner of Audi, VW and Skoda products, from the A6 to the Tiguan AllSpace to the Octavia RS and everything in between, this is one of the best four-cylinder engines around.

Idle is vibration free and refined, there is almost no lag, and responses are so immediate, it doesn’t feel turbocharged. There’s no sudden spike in power when the boost comes in, probably down to the BS6 tune, but there’s still is a clear ramp up after 2,000rpm, and then performance rises steeply, all the way to the conservative 6,200rpm redline. What adds in to the experience is that the engine just loves to rev. There’s an enthusiasm here, as it winds up the powerband, that you’d normally find only in a naturally aspirated engine, and though the acceleration doesn’t quite throw you back in your seat, performance is still very urgent. A quick test we carried out revealed a 0-100kph time of 8.08 seconds, but with a stronger launch, the Q2 has the potential to be much closer to its claimed time of 6.5 seconds. 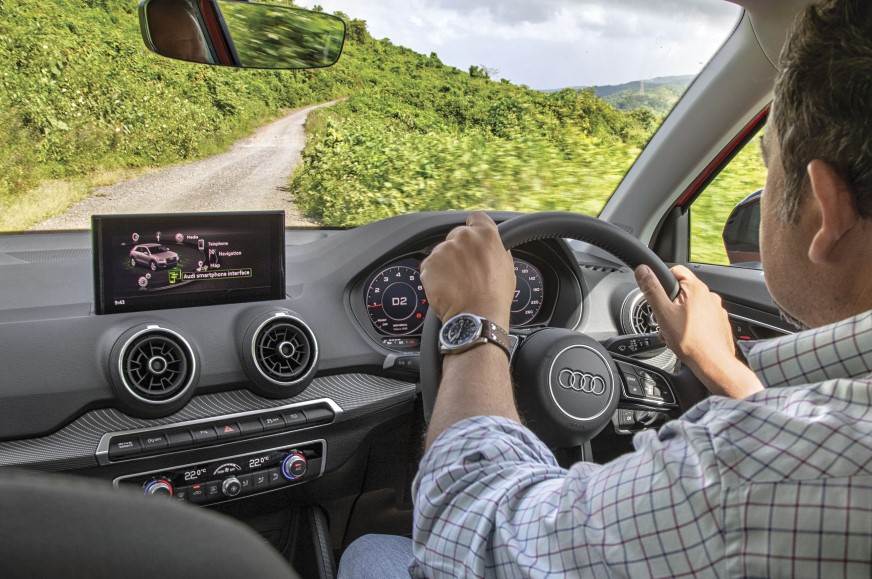 Body control in general is very good but there is some stiffness felt.

The Q2 also, expectedly, comes with a dual-clutch gearbox, which is quick on the draw during regular driving, and allows you to snap through the gears smartly. What takes away from the driving experience, however, is that at times it can be reluctant to shift down. This happens just when you need it most; when you need to brake, downshift and get into a corner,  and this can be quite frustrating.

The suspension also rides silently over several of the bad patches we encounter. While it’s fairly absorbent, there is some amount of stiffness here, and this shows up over some of the sharper-edged bumps we encounter.

Also, while there is a bit of roll in corners, body control in general is very good. In fact, once you get stuck in, it feels more like a sporting hatch than an SUV. The long-travel suspension is kept on a tight leash and the Q2 settles down quickly after that initial bit of roll. Since there’s plenty of grip, you can put the power down quite nicely too. The steering could do with a bit more feedback though, and the Q2 begins to understeer if you push a bit harder. Still, the driving experience in general is so pleasing, this is a car you just love to drive quickly, be it in a straight line or around a series of nicely meandering corners.

Up ahead we stop to take some pictures of the cabin. With scattered clouds blocking out the sun, it’s also the perfect time to take some pictures on my phone. The Q2 is a crossover that has plenty of interesting details. Like many Audis, this isn’t a design that shouts out loud or draws attention to itself. The ice-cool, understated demeanour is there in spades, and the more you look at the Q2, the more you appreciate it, as attractive forms and interesting details emerge. Audi’s design team has surely got the basics right. 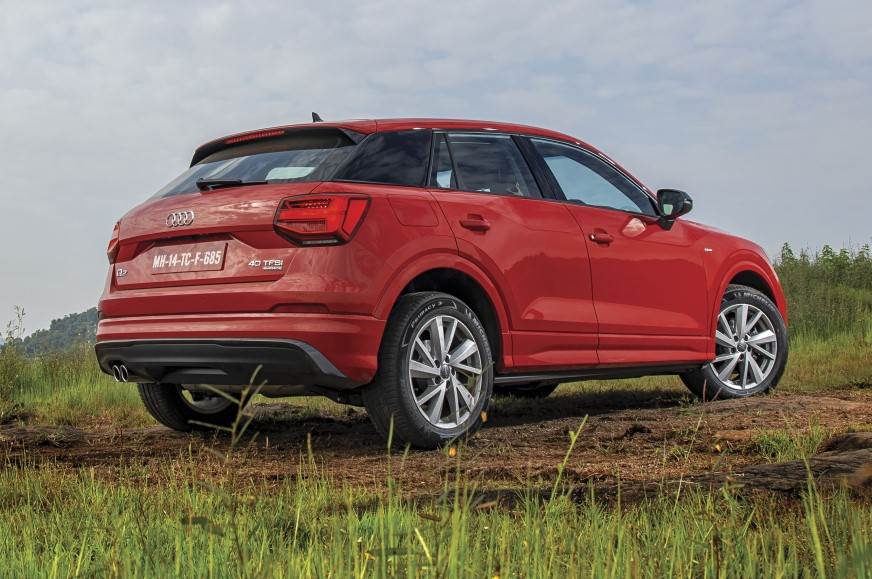 It’s quite a forward-looking design by Audi’s conservative standards, but it isn’t really loud or in your face either.

The stance, for example, is spot on. While the Q2 may only be 4.2 metres long, the strong shoulder line, gently bulging wheel arches and fast roofline draw your gaze.What catches my eye next is the wide and rectangular nose with its trapezoidal details: the grille, the headlights and what look like fog-lamp brackets, but aren’t. Audi designers have also provided plenty of interplay between light and shade. The flanks of the Q2 look like they’ve been worked on with a giant chisel, and these scooped out sections look great, especially with their sharp cuts and ridges catching the light. The ‘T’ shaped pattern in the headlights and tail-lights is also unique, and although the Q2 is neither an SUV nor a hatch, it appears to be comfortable in its own skin and not awkward looking in the least; a malady many crossover designs seem to suffer from. 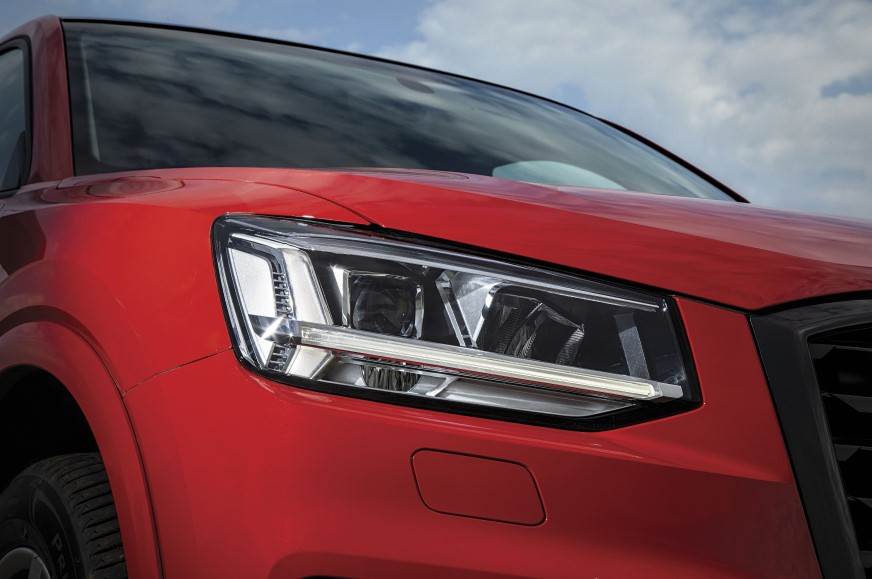 ‘T’ shaped motif in headlight also seen in the tail-light.

While the badge on the grille says Quattro, it’s important to note that this isn’t one of Audi’s typical full-time all-wheel-drive systems. Unlike the arrangement used on its larger cars, which use a longitudinally mounted engine and a Torsen-based Quattro system, the Q2 is based on the VW Group’s MQB platform, and so comes with a transverse engine, a front-drive-biased setup, and an on-demand AWD system based on a multi-plate clutch.

The Q2 may be small on the outside and only has as much space on the inside as your average mid-size family SUV, but given the shadow it casts on the ground, packaging is still good. There’s more than sufficient place for those sat up front, both front seats are extremely supportive and comfortable, and finding the right driving position is also easy. The India-spec car, however, has no powered seats – a shocking omission, and there’s no touchscreen either; probably in an effort to keep the price in check. 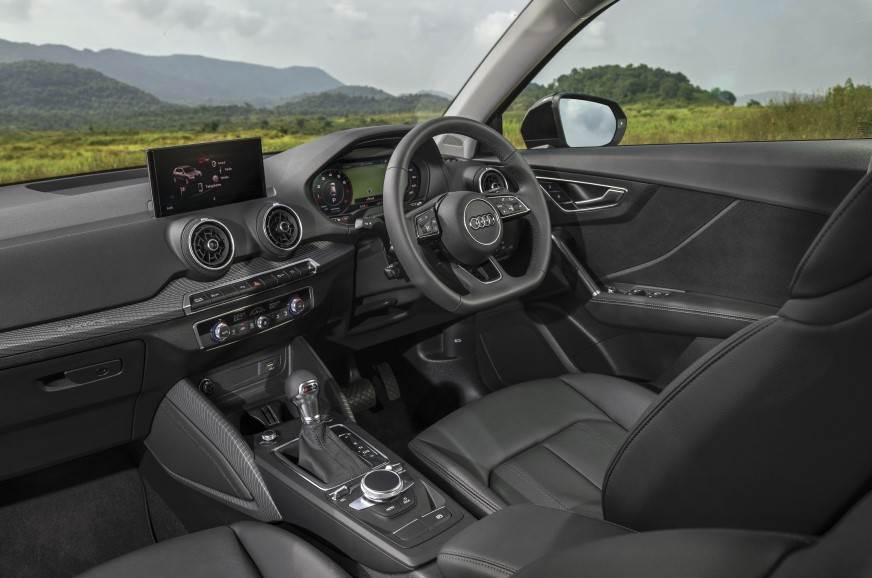 Visibility out is excellent; seat is placed at a height, and the A pillar is slim.

The slightly elevated driving position, however, feels just right. Visibility up front is superb and the dash doesn’t seem to be too in your face either. It’s aesthetically pleasing on the inside too. Quality levels are almost as good as they are in an A4, and the design of the dash has some of the TT’s vibe, with its rotary click-to-shut vents. The quality of the soft-top dash and the fit and finish of the various chrome elements make this a cabin you want to touch and feel all the time, and this is particularly true of the nicely put-together flat-bottom steering wheel that feels great to hold. The knurled metallic knobs and dials on the centre console are a delight to use, and though the LED inlay in the dash feels a bit gimmicky, the snakeskin-like effect is quite interesting.

In addition, you get Audi’s Virtual Cockpit – the configurable, fully digital instrument panel, a wireless charging tray in the elbow box and, though it isn’t quite panoramic, there is a big sunroof too. Rear visibility, with those massive C pillars and the slot-like rear windscreen is poor, though. 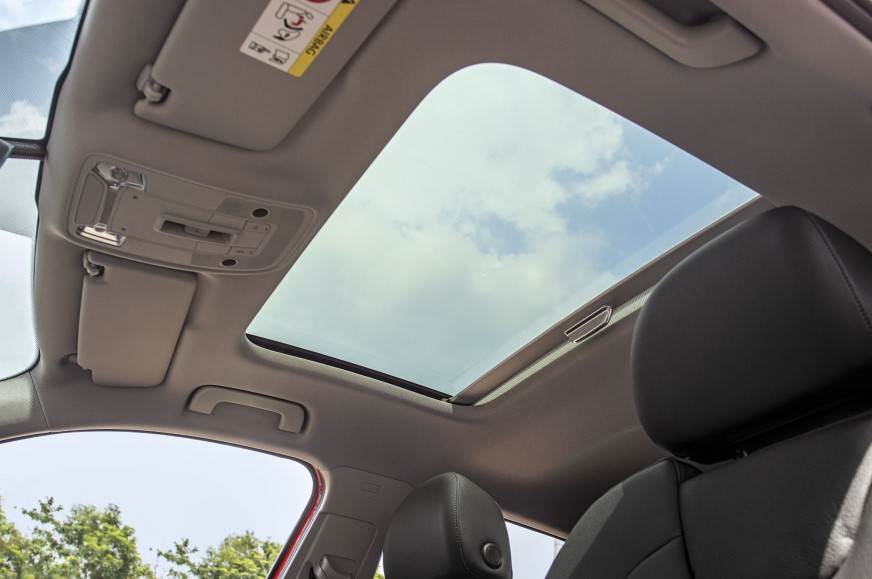 Now clearly, you wouldn’t buy a Q2 to be chauffeur driven in, but that said, there’s sufficient space in the rear to be comfortable. Headroom is decent, there’s some surplus knee room, and since you can put your feet under the front seats, you can even stretch out a bit. The seat base is short, however, and the backrest is a bit upright, so no long drives with people sat in the rear, which also feels a bit dark and dingy. Also, while there are USB sockets in the rear, both are Type C units, so you will need adapters. 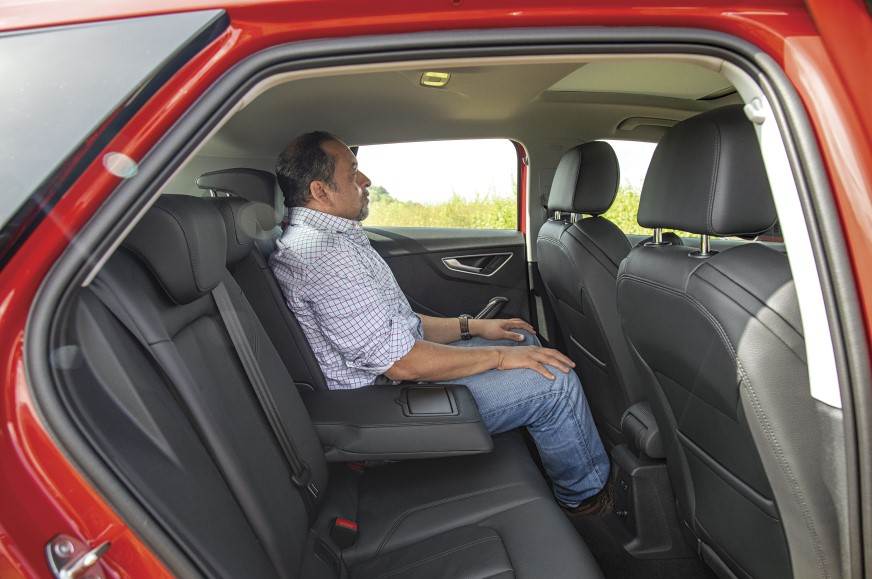 Legroom is decent but backrest is upright and the seat isn’t too comfortable.

While the boot is well shaped and easy to load, and you get a decent 405 litres, it is only large enough to carry a pair of large bags in the back. There is enough luggage room here for a weekend excursion, and should you need more space, you can fold the seatback down. So that you don’t get stranded with a puncture, there is also a space-saver spare tyre placed below the boot floor. 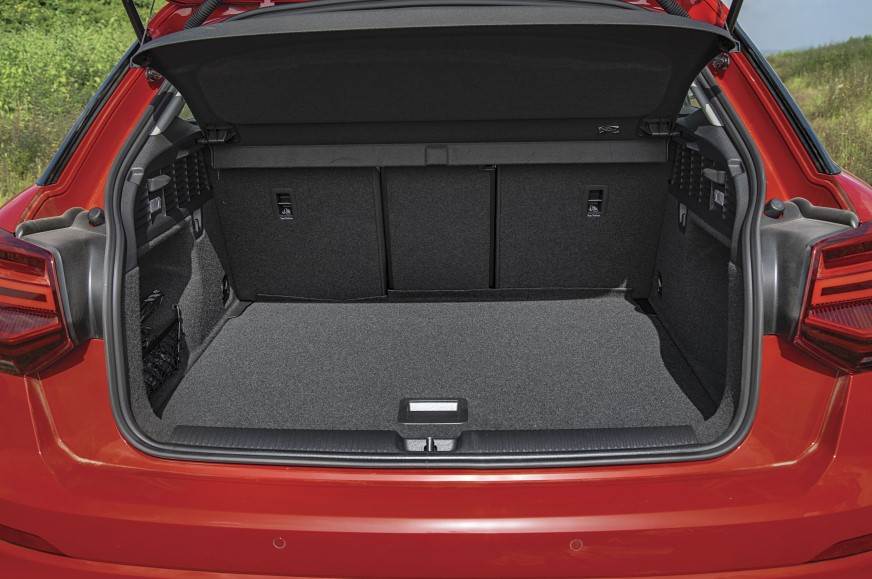 405-litre boot is nicely shaped; and you get a space-saver spare tyre too.

At an expected starting price of Rs 35 lakh ex-showroom, Audi’s imported Q2 isn’t for those looking for value for money. Unlikely to be a rational choice, it is targeted more at self-driven owners who want a compact luxury crossover with good performance, easy everyday usability and a high-quality cabin. For your money, you get a high-riding car, an added dose of excitement thanks to the peppy petrol and relatively light weight (which frankly is central to its appeal), and it feels agile from behind the wheel too. 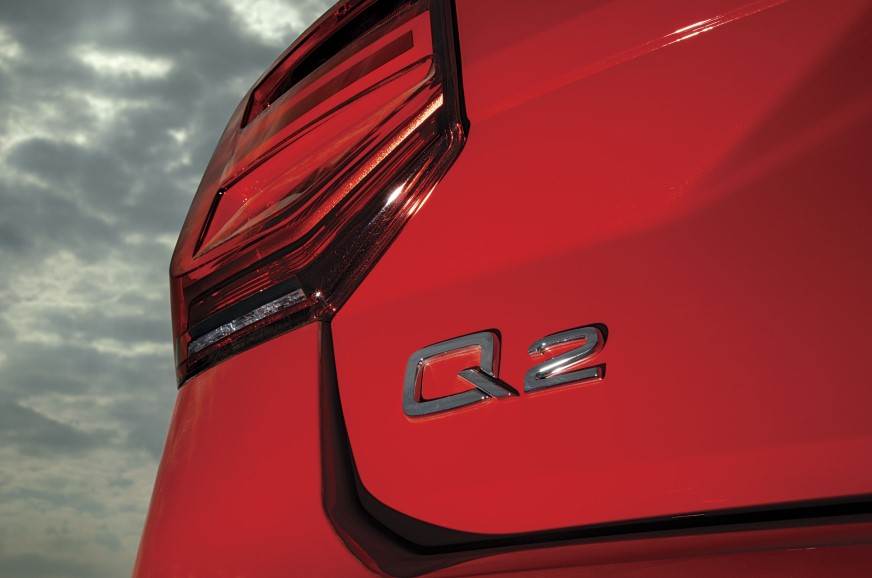 It should have been better equipped at this price, and there will be a mild facelift out internationally at around the same time the Q2 goes on sale in India, which customers are unlikely to be happy about. But if compactness is a virtue, and at times it truly is, the Q2 could be the compact luxury crossover you are looking for.